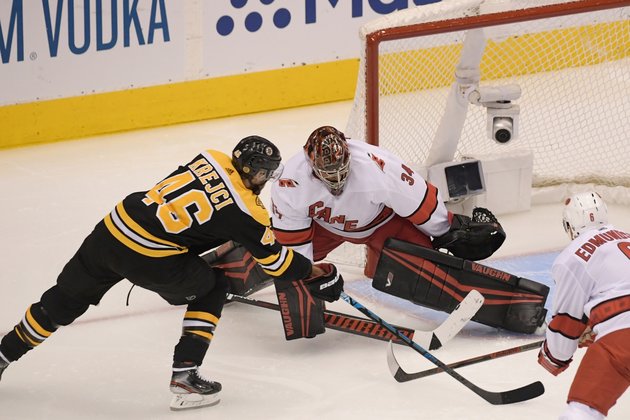 When you play Stanley Cup playoff games for the Bruins, you learn something very quickly: Don’t hit the panic button.

The Bruins had plenty of reasons heading into Game 1 against the Hurricanes to doubt themselves. After all, they earned 100 points in 70 regular season games and couldn’t earn a single point in three round robin contests.

Heck, they couldn’t even claim the lead in 180 minutes of play against the Flyers, Lightning and Capitals.

They were down 1-0 in the first Wednesday when David Pastrnak took a beauty of a pass from Brad Marchand and tied the game, 1-1. Then lo and behold, Charlie Coyle took advantage of Petr Mrazek’s inability to freeze the puck under his glove and gave the Bruins a 2-1 lead 4:38 into the second period. That thrill of finally having the lead lasted all of 21 seconds as not only could the Bruins not take advantage of the power play they were given for Carolina’s failed challenge on the Coyle goal, they allowed a short-handed tally from Brock McGinn on a Pastrnak giveaway.

A lot of teams would’ve held their heads low. Not the Bruins according to David Krejci.

“I don’t think it really shook our bench,” Krejci told me. “We’ve been in this situation before. We have a confident group just like Bergy said. We believe in each other. We believe we’re a good team. If we play the way we’re supposed to play, we’ll get a win. Just stuck with it, we played the same way, got a big goal by a big line and it feels good to get the first win out of the way.”

A lot of teams would’ve also been shaking their heads hard enough for a concussion after Jake DeBrusk hit three pieces of pipe on two different chances over the first two periods. DeBrusk was understandably frustrated with the inability to put one of them away that would’ve kept the Bruins from playing an addition 21 minutes to earn a Game 1 win. How frustrated? He snapped his stick in half over the Bruins boards after one second period chance.

“Listen, this is playoff hockey. Guys are going to get frustrated,” Bruce Cassidy said. “As long as they don’t let it affect them on the ice in terms of their job responsibility, job description and discipline. I think Jake was a little bit (frustrated), he had a few good looks, didn’t go his way. I thought he worked hard to get those. He keeps doing those type of things, it’ll go in for him. Power play got frustrated for obvious reasons.”

It was ironic that Bergeron’s game-winner came less than a minute after a rare overtime power play chance. The Bruins power play was scoreless in four chances with three shots.

“Give them a lot of credit for bottling us up,” Cassidy said. “We got a little stubborn at times, so there was some frustration there. At the end of the day, it didn’t affect our five-on-five play. I thought we stuck with it, defended really, really well. We played hard. We played for one another, supported pucks and did a lot of good things on offense five-on-five. I thought [Petr] Mrazek played really well, made some key stops on some good looks for us. It was certainly our best five-on-five offensive play we’ve seen since we restarted.”

Bergeron with the game-winner from Pasta: #NHLBruins pic.twitter.com/ocsBFr1m67

Yes, many of the same Bruins on the ice for Bergeron’s eventual game-winner 1:13 into the second overtime Wednesday have indeed been in this situation before. Like Bergeron, like Zdeno Chara, like Krejci, like Tuukka Rask, like Brad Marchand. All of these Bruins have tasted the thrill of the 2011 Cup run and the agony of losses like 2010, 2013 and 2019.

“We were confident. We’re a confident group, confident line,” Bergeron said. “I think we got better as we went on in the round robin. Obviously you want more, you want to keep getting better and taking the next step, especially we thought that (Game 1) was a really important game, starting round one, so we had to put whatever was behind us in the past and get some rhythm going. I thought Krech’s line and Kuraly’s line, they got some momentum for us, they got us going and I thought we followed up.”

Bruce Cassidy says his #NHLBruins bunch knows how to handle frustration in the postseason, and it paid off Wednesday in Game 1 vs. #LetsGoCanes pic.twitter.com/sI1DEVATmL

The key to understanding this Bruins team is to understand how very well they know their own (socially distanced) room. That’s why when Rask says “real hockey” begins with the first round, we have to take his word for it. Rask himself wasn’t Grade A on Wednesday. But he didn’t have to be. The top line finally produced and he made just enough saves in overtime to keep the Bruins from having to answer far more painful questions, from fans, media and themselves.

“I don’t think we pay too much attention to the outside noise and what other people think of what the outcomes are going to be,” Coyle said. “They’re not the ones playing. We’re going to control what we can control and that’s inside our locker room, what we’ve got on that ice there. We’ll just take it one day at a time and we have great leadership that leads the way and keep our mindset right going into each game. We win that first one which is huge but it’s just one and we still have a long series ahead, so we’ll be prepared for that.”

The Most Memorable Bruins Moments of 2021