Cam Neely & Jeremy Jacobs: Brad Marchand Has “Used Up” All His Chances 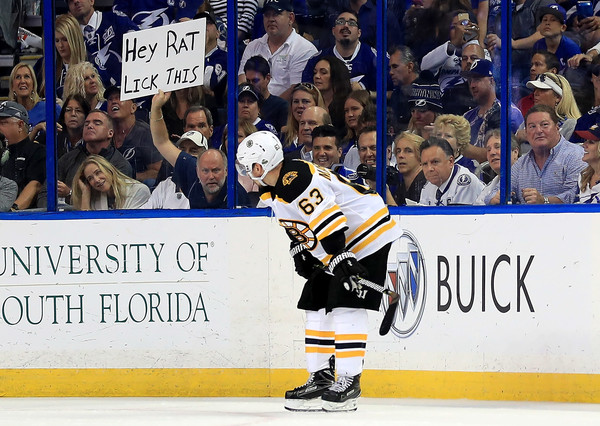 BOSTON — At their end-of-season press conference, Boston Bruins owner Jeremy Jacobs and team president Cam Neely were open and straight to the point with their views on star left-winger Brad Marchand.

“He was spoken to,” said Neely. “I don’t want to go into details, but he understands how he put a negative focus on him, his family, the organization, his teammates, coaching staff.”

When he wore the spoked-B, Neely was widely-known as someone who liked to play on the edge. But, he made it clear that licking was not something that went without consequence back in his day.

“It was a different game back then,” stated Neely. “So you can imagine what would have happened.”

Jacobs was even more critical of number 63.

“I saw humor in his incidents,” exclaimed Jacobs. “Then I thought it was, as it went along, pretty silly and not productive towards the team. This is a player that, I can only think of 30 other teams that would love to have him, so there’s a margin that you give him. But I think he used up that margin.”

That margin became apparent as the Bruins were being ousted by the Tampa Bay Lightning in round two.

In Jimmy Murphy’s recent piece regarding Marchand’s need to change, he cited a conversation he had with an NHL source about Marchand’s antics.

“The Bruins — from owner down to team leaders made it clear to Brad Marchand that he needs to play his game but with team standards of excellence,” said the source to Murphy. “And they believe he can and will meet those because they know the person he is. Message sent and received, moving on.”

Neely echoed that sentiment today when talking about Marchand off the ice.

“The thing that people don’t understand is that Brad is a really good guy,” asserted Neely. “If you don’t know him, you see this other stuff, and you really don’t think highly of him. And, he’s a tremendous hockey player. So, he’s got to the point now where his game on the ice, without the antics, should speak for itself.”

After the season ended and the dominoes had fallen the way they did for the Bruins, Marchand spoke on how he needed to change his ways.

“When you play a certain way with no consequences for 25 years it’s hard to just flip a switch and that will all be gone,” said the 30-year-old. “I haven’t paid enough attention to it because I felt like I could get away with it and never deal with the consequences because I was still being a good player. If I wasn’t having the years that I was having, would I be in the league? I don’t know. Would the Bruins have put up with it? Probably not, if I wasn’t doing what I’m doing on the other side of things.”

“It all comes down to me. I felt like, I don’t know, maybe I took advantage of the situation a little bit more because I didn’t feel the need to change because I was kind of backing it up on the back side of things with producing; but that’s not fair to my teammates and the organization.”

Marchand had 85 points in each of the past two seasons and had scored a total of 110 goals in the past three seasons. It’s no secret that he’s a weapon on offense.

But despite the goal-scoring and point-getting, the Bruins are clearly sick of Marchand’s antics. That message was definitively sent today by Neely and the senior Jacobs.