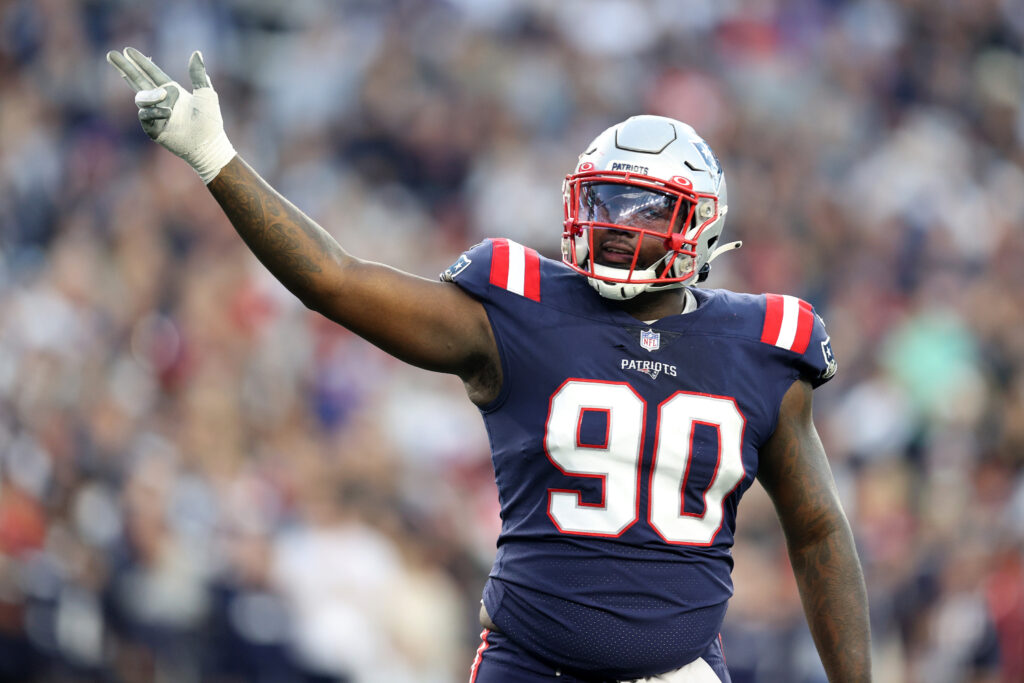 FOXBOROUGH, MASSACHUSETTS - OCTOBER 17: Christian Barmore #90 of the New England Patriots reacts after a play in the second quarter against the Dallas Cowboys at Gillette Stadium on October 17, 2021 in Foxborough, Massachusetts. (Photo by Maddie Meyer/Getty Images)
Share
Facebook Twitter Email

The Patriots have now completed two fully-padded practices during their 2022 Training Camp, and there’s one player that’s sticking out above the rest:

His name is Christian Barmore.

According to multiple reports from Gillette Stadium, the second year defensive lineman has dominated Pats Camp this week, and is looking to build off of his solid rookie campaign.

Barmore logged 46 tackles, 1.5 sacks, and 2 pass deflections during his first season in the NFL. He was a helpful presence in the interior of New England’s front – despite their sub-par run defense.

How much better can the DL realistically get in 2022, does the former Alabama Crimson Tide player have what it takes to win the Defensive Player of the Year award?

Our exclusive betting partners at BetOnline.ag have odds posted on who will win it in 2022. Here’s a look at their top 10:

2022 NFL Defensive Player of the Year

As you’d probably expect, Barmore is not on BetOnline’s list.

Let’s be real here – it isn’t very likely that a second-year tackle is crowned the best defender in the game. However, as I mentioned above, the reports from camp thus far are that Barmore is dominating. He’s been called “unblockable” and “far and away the most impressive player through two padded practices,” according to CLNS Media’s Director of Content John Zannis.

Barmore said that he’s worked on improving his run defense this offseason, “literally everywhere I play I want to dominate the run.” NBCSports’ Tom Curran asked him when the last time he felt physically dominated was: “I don’t know about that, man.”

I expect Barmore to be a Pro Bowler in his second season, and I bet he could even sniff an All-Pro team. I also think he could eventually win Defensive Player of the Year.

This year? Not so much. I’d stick to a guy like Aaron Donald at +1000. Here’s to hoping Barmore can be as dominant as him some day.