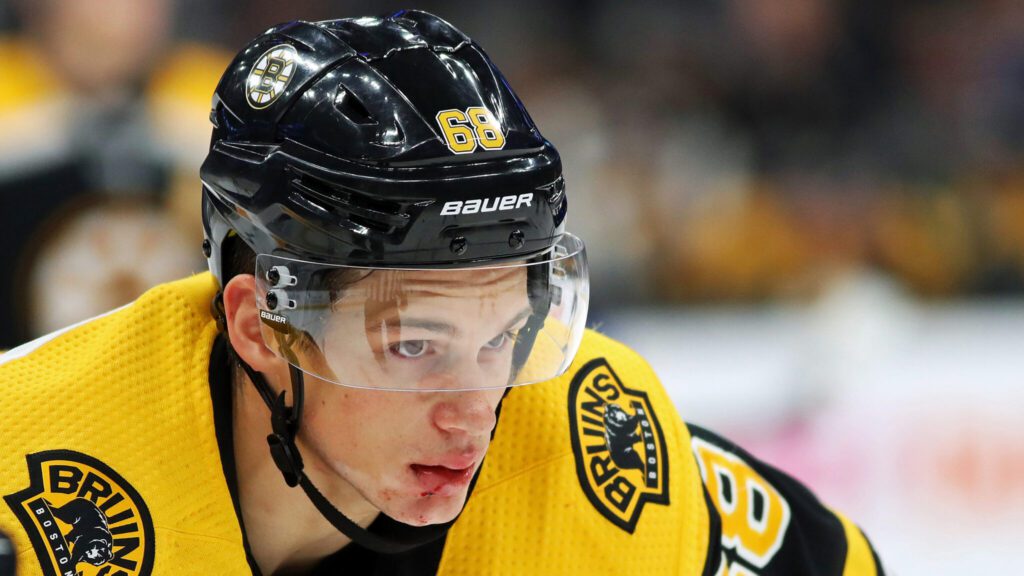 BOSTON, MASSACHUSETTS - SEPTEMBER 25: Jack Studnicka #68 of the Boston Bruins looks on with an injured lip during the third period of the preseason game between the New Jersey Devils and the Boston Bruins at TD Garden on September 25, 2019 in Boston, Massachusetts. The Bruins defeat the Devils 2-0. (Photo by Maddie Meyer/Getty Images)
Share
Facebook Twitter Email

There will be a changing of the guard in Boston at some point over the next decade. Chances are it takes place sooner rather than later.

Patrice Bergeron turns 35 in July, and he’ll be 37 if he decides to keep playing through July of 2022. David Krejci just turned 34 and will be a free agent after next season. Though he recently said he plans to keep playing after his current deal ends, where he’ll continue playing is still unknown.

One of the most stable aspects of the Bruins over the past 13 years is on the cusp of experiencing turnover. Boston has certainly been planning for it — two of the team’s last four first-round picks have been centers. Charlie Coyle, 28, is now signed through the 2025-26 season.

But the player most likely to follow in the footsteps of Bergeron and Krejci wouldn’t be grouped into the descriptions above. Drafted in the second round of the 2017 NHL Entry Draft, Jack Studnicka has quickly become the organization’s most highly touted prospect. His first year in Providence this past season saw him lead the team in scoring with 49 points. In his four-year OHL career, he totaled 233 points in 252 games. He’s shined on the world stage for Team Canada.

All signs point to the centerman becoming a legitimate force for the Bruins in years to come.

The question then comes down to just how much of a force will he become in Boston? To get a good look into what his future might hold, Studnicka’s journey through the OHL highlights a lot of the qualities he brings to the table on and off the ice that just might make him Boston’s next No. 1 center.

Roger Hunt had a realization.

The Vice President and General Manager of the Oshawa Generals (OHL) needed to pick a captain heading into the 2017-18 season. Anthony Cirelli, the team’s former captain, had been traded midway through the previous season.

Hunt and the team’s next choice was obvious: Studnicka.

“I think by playing with Cirelli for a year and a half, he watched one of the few leaders in our league and he probably learned from that, so he’d do things that Anthony would do,” Hunt said. “It seemed like ‘Hey, he’s here for a few more years, it’s become his team.’ We traded away the players now that were older and went to the Memorial Cup with us.

Throughout his time as captain in Oshawa, Studnicka served as the player the coaches or management went to when they wanted to get something across to the team.

“If I needed something, I’d go to Jack,” Hunt said.

According to Hunt, Studnicka earned the captaincy not so much for being the team’s best player, but because he was the squad’s leader in general. As the years went by and Studnicka’s dominance drastically improved on the ice, so too did his leadership off of it.

It also helped that Studnicka entered the OHL with an already high maturity level.

“He was always well kept, always put together,” Hunt said of Studnicka. “All those things in a captain. He could speak, he could engage. All those things made him the captain regardless of whether he was or wasn’t our best player.”

Studnicka was captain from the start of 2017-18 until he was traded to the Niagara Ice Dogs midway through the following season — ironically, just about the same amount of time Cirelli held the captaincy.

Those leadership skills didn’t end with the trade. They only became enhanced.

Taking on many roles

Studnicka didn’t walk into an easy situation in Oshawa. The team had just won the Memorial Cup and there was lots of turnover throughout the lineup. As a rookie in a league with some much older guys, things didn’t come easy.

He was immediately slotted into the top six. There was just one issue that became apparent to Hunt and the rest of the staff in Oshawa.

“He puts a lot of pressure on himself,” Hunt said. “That was the one thing I knew we had to manage a little bit; he was down on himself at times and he struggled to get his first goal and I want to say it was right before Christmas in year one that he actually got his first goal. That was like a weight lifted off his shoulders.”

Studnicka potted four goals and 22 assists for 26 points that first year. His numbers only increased from that point forward, as well as his numerous jobs on the ice.

“He played the non-glamorous side which sometimes, in juniors, is hard to get players to play like,” Hunt said. “He was strong defensively…Jack can handle both ends of the ice, so that’s what made him catch our eye and give him that opportunity.”

Not only did his two-way, do-everything style increase his on-ice roles with the Generals — it landed him on the team in the first place.

“He was a coaches go-to guy,” Hunt said of Studnicka when he recruited him as a player on the Belle Tire U16 team. “He was that guy who took a big faceoff, he was out late in games, he would start games. I think if you trust the coaching fraternity, if they have the confidence in a player at that level, you want it to be able to translate to us and it certainly did.”

He took on even more roles in Niagara.

Fitting in perfectly after getting traded

It left a solid first impression on Burke.

Upon arrival, the Ice Dogs stitched an “A” on his jersey. In his first week with the team, he became the team’s No. 1 center, as well as the primary guy on the penalty kill and first power play unit.

“He really came in and kind of took on all of the biggest roles you really can especially on a championship caliber team coming in midseason like he did,” Burke said. “But really it was unbelievable that we gave him the torch and he ran with it, which was very impressive to see.”

Studnicka put up a whopping 49 points in 30 games for Niagara. But similar to his time in Oshawa, it wasn’t all the scoring that gained so many fans in the front office — it was the two-way game that stuck out.

“While he has the offensive game, it’s his ability to put everything together that’s very unmatched and a very rare quality in a guy to have the offensive ability and instincts that he has but also has the engine and the detail and the defensive prowess and the grit and the toughness and the speed.

“There’s not a single aspect of his game that you could qualify — at least at the OHL level — as not being elite…It’s the versatility, the complete nature of his game that was so fun to watch.”

Looking back, Burke thinks of Studnicka as if he played three to four years in Niagara instead of the three to four months he was there for. The organization holds the dynamic centerman in high regard and considers him family.

“You usually don’t get that comfort level of familiarity and friendship and camaraderie in such a short amount of time,” Burke said.

And when the subject of Studnicka’s leadership arose in the dressing room, there was one simple and clear message.

“For the young guys it was you want to be a pro? Look at how Jack Studnicka approaches everything about this game and that is what you need to do,” Burke said.

How he projects to pan out in the NHL

Both Hunt and Burke gave different player comparisons for what Studnicka could become in the NHL. Both offered up names as a compliment to the young center.

“I always kind of compared Jack to a guy like Kyle Turris,” Hunt said. “I think he’s just going to be that guy that’s an ultra-reliable guy and he’ll be pushed to become that guy and he’ll take on roles. He doesn’t hide from anything.”

Throughout his 12-year NHL career, Turris has been a stable, top-six center in the NHL. His two-way play, skill and high hockey IQ have kept him around.

Burke based his comparison on mindset — one he saw up close in Niagara.

“He’s a different player than Andrew Shaw was, but he reminds me a lot of Shaw,” Burke said. “Came to Niagara in the sense that he’s just got that X factor that there’s something about him that he’s not going to be denied. With Studs, he’s able to do everything at 100 miles an hour, which obviously you need to succeed at the NHL level. Barring that, he’s fearless.

“He can go right into a bottom six role with Boston and he’ll flourish right out of the gate because he’s got the speed, the work ethic and all that stuff. He also has the ability to move up in the lineup.”

Shaw spent two seasons in Niagara and has carved out a respectable nine-year NHL career.

Most project Studnicka to exceed both Shaw and Turris in terms of stats and impact. Not to say Shaw and Turris haven’t been good — it’s just the expectations of Studnicka’s performance are extremely high.

“He’ll want that responsibility and I know as a coach or manager, you’re always looking for that guy that’s willing to step up and take that show like [Michael] Jordan,” Hunt said. “He wants the ball with three seconds to go and Studs wants that last show of the game. If the team needs something, he’ll go get it.”

Turris, Shaw, Jordan — no matter the comparison, the Bruins just want some future stability down the middle. It feels like they might just have that in Studnicka.