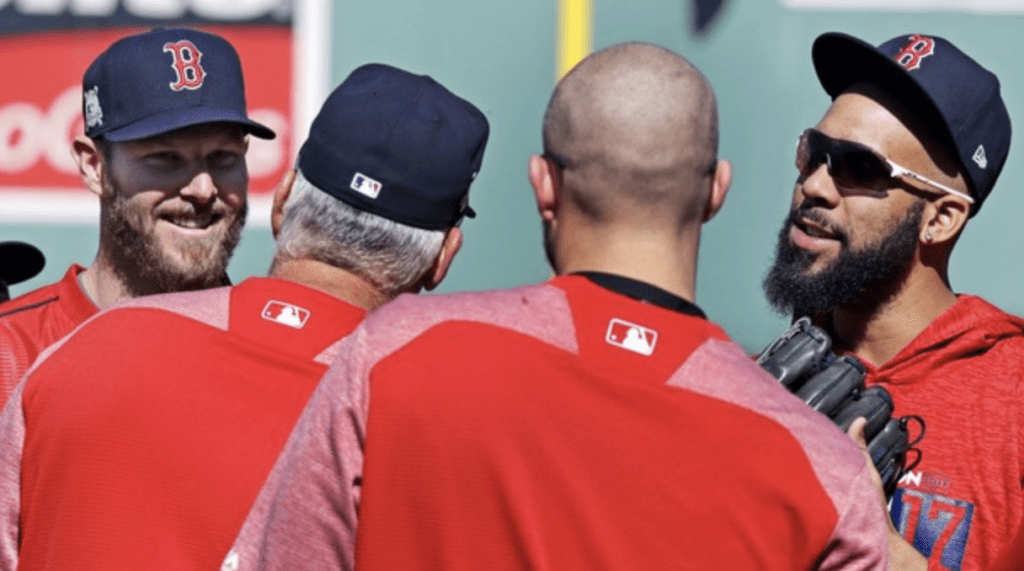 BOSTON — The postseason is a time for the cream to rise. And in Red Sox history, no pitcher has surpassed the performance of Josh Beckett in the 2007 postseason.

What Beckett did in the 2007 was one of the most dominant pitching performances in recent postseason history, right there with Madison Bumgarner in 2014 vs. the Royals and Charlie Morton in 2017.

Four starts, four wins, 30 innings, 35 strikeouts, four earned runs and 1.20 ERA. His biggest start came in Cleveland in Game 5 of the ALCS when the Red Sox were on the verge of elimination. He struck out 11 and allowed one run and five hits in eighth innings of a 7-1 Red Sox win.

In the 2007 postseason, no one carried the Red Sox more than Josh Beckett. On a team with David Ortiz, Manny Ramirez, Kevin Youkilis, Dustin Pedroia, Mike Lowell and Jason Varitek leading an awesome offense, it was ace Beckett who charted the course to a World Series crown.

Fast forward 11 years and the Red Sox head into the postseason with a club-record win total, their third straight AL East title but still doubts about their pitching, specifically, can Chris Sale and David Price take the load off an uncertain middle relief corps and rise to the next level like Beckett did?

Alex Cora was a utility infielder on that Red Sox playoff roster and recalls just how dominant he was.

“I’ve seen it firsthand. In ’07, Josh Beckett, I’ve never seen anything like that. Him going through the Angels and the Indians and the Rockies the way he did,” Cora told me. “Mentally, he was somewhere else. That was impressive. I do feel that there are guys, they get locked, and they locked in for a while in October, just mentally. They act differently. They see things that they probably don’t see in the regular season, and they execute it better than in the regular season.”

So, can Chris Sale and David Price find that “somewhere else” starting in October? The answer is likely to determine whether these Red Sox can turn a history-making regular season into the fourth World Series title run of the John Henry era.

Chris Sale’s final start of the season was in a 10-3 loss Wednesday night to the Orioles. He was just “getting work in” but allowed three runs and four hits in just 4 2/3 innings against the worst team in baseball, needing 92 pitches to get to the fifth. In his previous three “openers”, Sale three a collective 7 1/3 innings coming back from a second DL stint with a left shoulder tendinitis. Cora indicated Saturday that he and pitching coach Dana LeVangie will work closely this week to find his physical groove.

“He’s done it before,” Cora said. “Other guys have done it. It’s not like it’s a big adjustment so I think working this week and knowing what it is, he’ll be fine. I do believe so.”

Then there’s Price. In his final two starts, he was knocked around by the Yankees and Orioles, allowing 11 hits and nine runs (7 ER) over 10 1/3 innings.

In both cases, it’s very important to realize that both aces have been readying for the postseason since early September when it was clear the Yankees weren’t going to catch them and they would almost assuredly wind up with the best record in baseball.

“In our case, Sale threw the ball great for a long period of time,” Cora added. “He gets hurt. David throws the ball, he was great, too. It’ll be fun for us if the two can pitch to their abilities together for a month.”

Does Cora get the sense Sale and Price have the character to embrace the “next level” attitude?

“I think this team has that attitude,” Cora replied to my inquiry. “It started before the season. There are a few guys, the last (two) years here they went to the ALDS and it didn’t happen. (Whether it was) lack of experience or facing good teams or good coaching (smile), I do feel (from them) that’s there some unfinished business.”

PONDERING PORCELLO: Alex Cora says he’s not worried about Porcello in the postseason but acknowledged “he’s been hurt by the home run ball” That could be problematic against the most prolific HR-hitting team of all time. pic.twitter.com/IVdUqXUP42

As Red Sox pitchers were getting hammered by the big bad Bombers again Saturday, the worries were again very prominent in the minds of virtually every Red Sox fan. The Red Sox presumably have the bats to hit in the playoffs, with Mookie Betts and Xander Bogaerts not even playing Saturday. But do the Red Sox really have the pitching to win 11 games in the postseason?

Cora has tried to set a standard and create an attitude among all his players – not just pitchers – this season. Attack, attack and attack some more.

“Since Day 1, we’ve been talking about it. I told them don’t be afraid to talk about the World Series. Every team in the big leagues, that’s your goal. Why be polite or humble about it? That’s our goal. So, we’ve been in a good mindset for a while, since February and I don’t think that’s going to change in October. We know we’re going face some good teams. We believe in what we have and we believe we have a good team, too. Can’t wait for October 5th.

“The cool thing about this team is we don’t feel we’re perfect. We still believe that we can be better. We try to help them out to get to that point.”