The Celtics are the second-worst team in the NBA in 4th quarter net rating after another collapse against the Timberwolves. 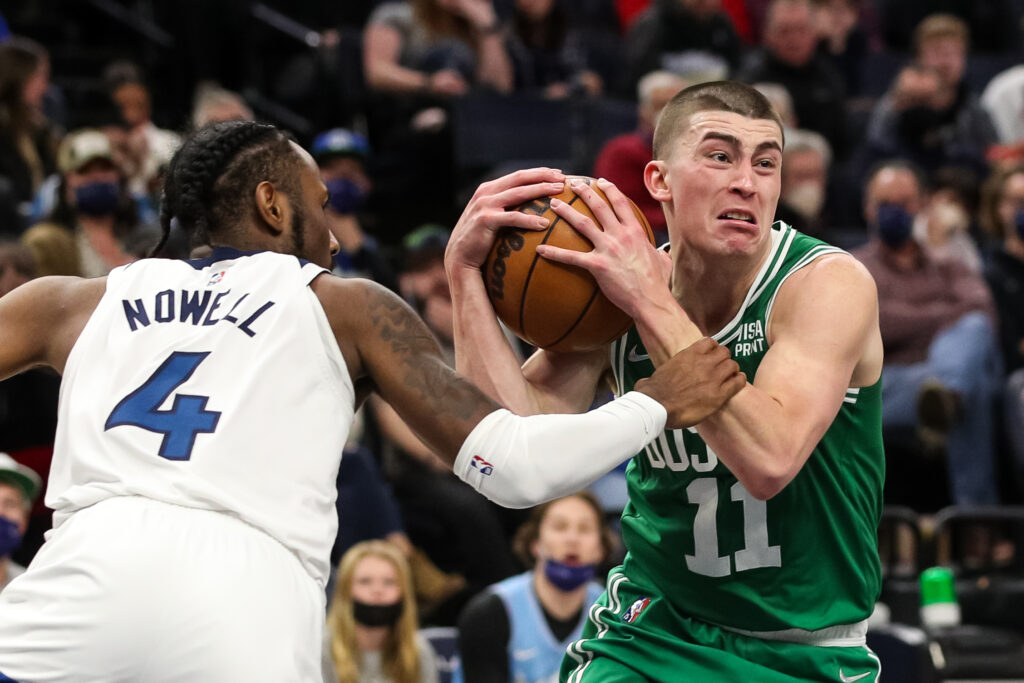 MINNEAPOLIS, MN - DECEMBER 27: Payton Pritchard #11 of the Boston Celtics drives to the basket against Jaylen Nowell #4 of the Minnesota Timberwolves in the fourth quarter at Target Center on December 27, 2021 in Minneapolis, Minnesota. The Timberwolves defeated the Celtics 108-103. NOTE TO USER: User expressly acknowledges and agrees that, by downloading and or using this Photograph, user is consenting to the terms and conditions of the Getty Images License Agreement. (Photo by David Berding/Getty Images)
Share
Facebook Twitter Email

That corner they turned was a circle.

The Celtics showed signs this past month that legitimately resembled progress. Jaylen Brown and Jayson Tatum playing off each other. Josh Richardson’s continued involvement in offensive success. They beat the Bucks, stood with the Warriors and lost a weird game against a monumental Joel Embiid performance. A win over the Cavaliers even felt fun. They lost the Philly and Golden State games late though, then startling stumbles on Christmas Day and reaching rock bottom in Minnesota, a 108-103 loss to the starter-less Timberwolves, made it all worth reexamining.

“It doesn’t matter who the opponent is on the other side. Milwaukee, really good team. Minnesota, they’re fighting in the west, a bunch of their guys out. At the end of the day, we kind of have to look in the mirror ourselves,” Al Horford said post-game. “Individually and as a team. It’s something that we have to do.”

The Celtics’ fourth quarter issues have been offensive in more ways than one. Boston now averages 104 points per possession in the final frame, ranking 24th, with their -8.9 net rating only one spot above the Nuggets for last place. As their offense impacts defense, an issue we’ve heard repeatedly this season, a sturdy Celtics  team in their own end has crumbled to a 113 defensive rating, 27th, in the same league as bottom-tier units like New York and Portland. The worst version of themselves.

It started with their shot profile on Monday. The Celtics took 14 of their final 22 shots in the game from three. When they did go inside and earn free throws, they missed their first four attempts. Brown finished the game 8-for-13 at the line. Payton Pritchard caught and shot passes far behind the three-point line and live ball turnovers only empowered Minnesota’s offense the other way.

This one doesn’t fall on Pritchard, Boston’s only point guard despite a wide market of G-Leaguers being available. Although his inside-out approach offensively led to simple catch-and-shoot actions repeatedly, he did sneak inside on the pick-and-roll around a Horford screen and hit two of the Celtics’ five shots at the rim in the fourth quarter. He ran the offense as comfortably as could be expected with Brown struggling to protect the ball, Dennis Schröder and Marcus Smart out and no real tertiary options available.

Brown responded to Horford’s soul-searching line without comment, his game amounting to a jumbled mess between six turnovers, missing passes and reads, and shooting 8-for-24 from the field. He threw the ball out-of-bounds past teammates three times, struggled to connect with Williams III in the P&R and attempted difficult shots in traffic all game.

Other Celtics regulars beyond Brown contributed to the letdown too. Robert Williams III committed his fourth foul less than one minute into the third quarter and his fifth foul 10 minutes later. In a game where bench-level talent played for Minnesota, he couldn’t keep himself on the court before a few late alley-oop finishes proved too late. His misses around the rim and dropped passes had already cost Boston earlier in the game.

As for Romeo Langford, now a starter in this world of COVID protocol, he’s played far too many minutes, and consequential ones at that, of empty offense. He missed two free throws to begin the fourth and has scored 24 points in his last four games over 118 minutes (6.0 PPG). This fourth quarter play draws back on Ime Udoka recently telling Brown to stop picking up his dribble in these spots in the post.

Pritchard, visible above in the corner, had to point Brown toward his passing progressions throughout the game. Going forward, Udoka will have a difficult offense-defense decision to make between Pritchard and Langford late in games. That already played out in last week’s loss to Philadelphia, when Langford entered late with Pritchard scorching from the field.

It’s worth taking a look at other recent meltdowns. On Christmas, the Celtics responded to Milwaukee’s willingness to switch everything by chasing mismatches the entirety of the closing stretch. Tatum continued to screen for Brown and Boston did get looks they liked after the fact, but it came to spite the effective ball movement they created all game prior.

Hearing Udoka approve of Brown and Tatum spotting up for jumpers in these situations sounded like a difficult balance to strike against his big-picture goals for the stars, especially while acknowledging the general challenge the team has faced in fourth quarters lately.

“Settling, at times, instead of attacking the basket when we can,” Udoka said. “It felt like even last game, the game against Cleveland, where we gave up a lead. At a point it starts to snowball. We’ve got to kind of settle down at that point and get somebody to calm everyone down, because it starts to snowball, and it’s not just one guy or two guys, it’s multiple guys who will try to do it on their own a little bit there.”

Boston ranks T-23rd in shots per game at the basket (26.2) and 22nd in three-point efficiency (34%). They’re also tied for second in isolation frequency (9.5%) and, in the fourth quarter, they fall to 28th in assist percentage (52%). The disappointing part in hearing Udoka accept thats style of play against Milwaukee is how parallel it falls to last year’s results, when the Celtics fell to 26th in assist percentage during the fourth.

Let’s also address Tatum, out against Minnesota in COVID protocols and trying to find his way back to Boston from Milwaukee, who sets the tone on much of these trends late as a lead ball-handler. His turnover ratio balloons from between 8-9% in the first three quarters to 12% in the fourth this season. He’s shooting 35.3% from the field in the clutch this season, according to Statmuse, and has only four assists to nine turnovers in these situations. His offense hasn’t produced many game-tying or go-ahead shots late, outside of a clincher in the home win over Philadelphia.

Much like Smart addressed earlier this season after the loss to Chicago, the opposing teams know Brown and Tatum are coming at them, and their settling is discontinuing Boston’s offensive progress from the rest of these games. Dennis Schröder has been a culprit at times, too, while Smart typically helps the situation, creating Boston’s best look down the stretch in Milwaukee.

Still, the combination of players calling for the ball, failing to connect and looking disorganized in these late game situations feels like the fatal flaw of this team. Their inability to come together in these situations and at least adjust the manner in which they play is concerning, especially under a coach determined to try to create that change.

It begs the question, even if the personnel around them changes, they add more talent and inch closer to contention, will they be able to execute when difficult moments emerge? We all see what Udoka does. The snowballing, and not because it’s Christmastime.

“We have to figure this out as a team,” Udoka told the group after the Christmas loss. “As a coaching staff. How to maintain these leads, especially late in the games? It gets a little frustrating, obviously … the endings, in a lot of these games, it feels like we’re giving away.”