Celtics Are Beginning to Embarrass Opponents After Jazz Blowout

The Celtics built a 20-point lead for the fifth straight game on the Jazz, embarrassing them with blocks, hard fouls and forced turnovers. 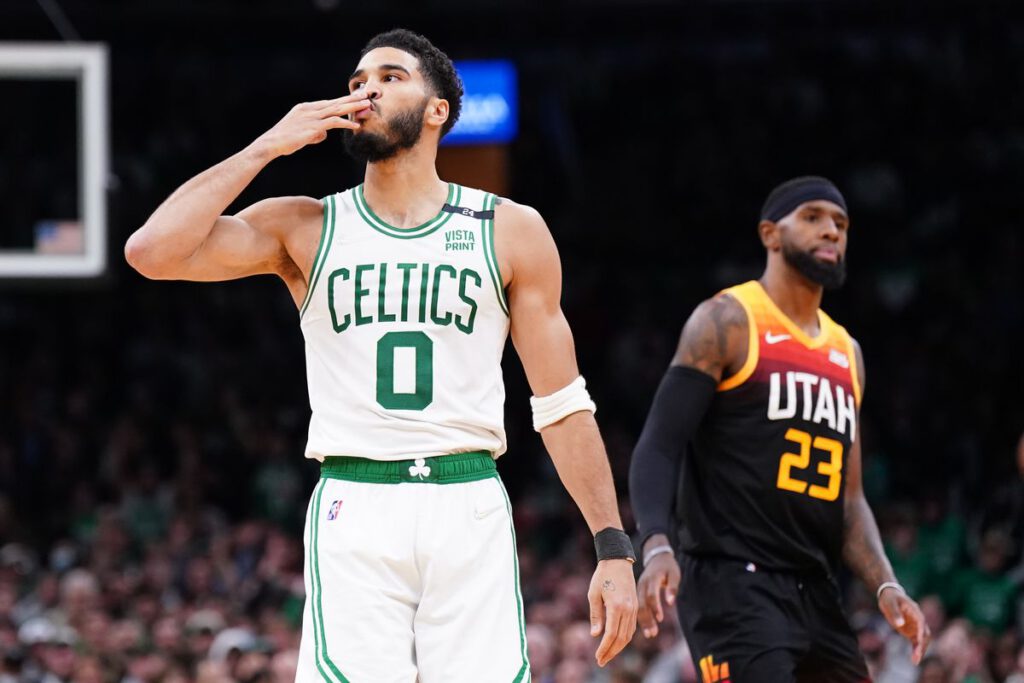 BOSTON — As explosive as Robert Williams III’s blocks explode off his hands all season, he still hadn’t emerged as a Patrick Ewing at Georgetown or Dikembe Matumbo finger-wagging intimidator inside. Williams III slams alley-oop dunks down and slaps shots away on the other end more casually. A slight flex and yell after swatting Eric Paschall’s layup try into the row of court side fans near Mike Gorman’s broadcasting station stuck out for that reason.

Williams III rejected Donovan Mitchell on the next play, sending him tumbling to the floor, before laying down two hard fouls on Jordan Clarkson and Mitchell.

The Celtics already led by more than 20 points for the fifth straight game midway through the third quarter, as the hottest team in the NBA advanced from blowing out opponents to demoralizing them. Denver and Utah had played top-10 basketball over the past 15 games before sliding into the Celtics buzzsaw. Boston beat the Jazz, 125-97, in a game filled with flexes of their physicality and dominance on defense, which flowed into a flawless offensive night.

“We had a rough night on both ends,” Quin Snyder said. “I think that’s pretty obvious. The Celtics played with energy and force, and they brought it on both ends. We did not match that energy. It’s one thing if they were hitting tough shots. But we did not make it tough on them for the majority of the night.”

Like in Denver three days earlier, the Celtic shut down the Jazz offense and doubled their lead from ahead by 15 points to 30 points midway through the quarter while forcing Utah to miss 10 of its first 12 shot attempts. Then, Clarkson beat Williams III with an up-fake above the three-point line and barreled downhill into a dunk attempt that Daniel Theis rotated over on and swatted in the other direction. Clarkson and Hassan Whiteside slumped their shoulders and didn’t get back on the defense.

Ime Udoka gave Payton Pritchard and Derrick White extended run in a double big lineup with Theis and Williams III as he tries to further acclimate the newest Celtics late in the season. Boston’s defensive energy continued right into those lineups. Earlier in the quarter, Theis rotated to help Pritchard after Clarkson beat him, forcing Utah’s guard to lose the ball. White and Theis engulfed him by the time he recovered the ball in the corner, Pritchard sneaking around Theis on the baseline to strip Clarkson and storm into the offensive zone to hit one of his three triples in the win.

“I just started to take pride on defense,” Pritchard said a practice the next day. “People, because of my size and stuff, they want to say, I hear it all the time, like I can’t defend or something. So I got a chip on my shoulder in that aspect. I’m out to prove I’m not somebody you can go at.”

Pritchard’s threes and ability to survive, and even thrive on the defensive end, extended a six-point lead to 20 in Denver. Michael Malone chose to start the third quarter after that explosion with Nikola Jokic and the Nuggets’ starters on the bench. Boston swept that four-game road trip, hustling enough in Golden State to send Steve Kerr into a tirade over Steph Curry’s injury following Marcus Smart’s dive to the floor.

Snyder, by comparison, lauded Smart in an extended answer pregame, calling his Boston’s leader and a unique player while reminiscing on scouting him in 2014. Smart immediately dove on the floor and broke up a play shortly after tip-off, unable to secure the ball before it flew out-of-bounds — slamming his hands on the floor. Williams III too, lamented his foul on Clarkson with similar passion he’s noted he learned from watching Smart.

Domantas Sabonis picked up a technical while Boston ran away with the game despite him scoring 30 points with 20 rebounds. The Thunder went down by 17 points in the first quarter to conclude the trip, which will go down among the most dominant west coast treks in Celtics history. Oklahoma City never let up in that game though, and neither did the Jazz two nights later, Mitchell peppering Boston with 37 points to prevent garbage time and keep the Celtics running their offense on the way to 37 assists on 50 baskets to maintain the lead.

“Our defense sets the tone for the entire game,” Brown said Wednesday. “It gives us more shots than the other team, and puts a lot of pressure on their defense, because if they don’t score, they’ve got to make sure they get stops. It’s hard to get going and get a rhythm for other teams if we consistently get stops, that makes it easier to win the game. If guys aren’t in rhythm, they don’t get it going, things for them might get a little tougher.”

Boston, winners of 10-of-11 in March, now boasts the No. 1 offense and defense in basketball on their current five-game win streak. The connectivity between each end shows out. They’re energizing themselves with stops, which feeds the offense and puts that additional pressure on the opposing defense.

It’s a feedback loop that’s ensuring the Celtics win every night, and amazingly landed Boston within 1.5 games of the Miami Heat on Wednesday night for the No. 1 seed over two months after the Celtics sat outside the entire playoff picture on that rock bottom night in New York City.

The Celtics did plenty of soul-searching back then. Now, they’re making opponents look themselves in the mirror, as Al Horford described it earlier this season, when they walk out of games double-digit losers against the Celtics. The Jayson Tatum shots fell in droves on a 10-for-10 start for Boston’s offense.

Udoka hardly sounded worried pre-game about Rudy Gobert, previously a player who could bother them and now dump-off and kick-out decisions from Smart and Tatum completely negated him. He didn’t record a block in the loss, Smart putting a bow on the win after a playful slap from Deuce Tatum on his backside with a flashy layup through Gobert’s post.

Fans booed Gobert all night, and again stood in ovation in acknowledgement of Boston’s defensive effort. It’s become as recognizable as Tatum’s kiss to the crowd, which Brown playfully acknowledged the star stole from him to follow back-breaking three pointers.

“At that point, we deserve to get beat,” Mitchell said. “We played into their hands. They kicked our asses. I got nothing right now.”