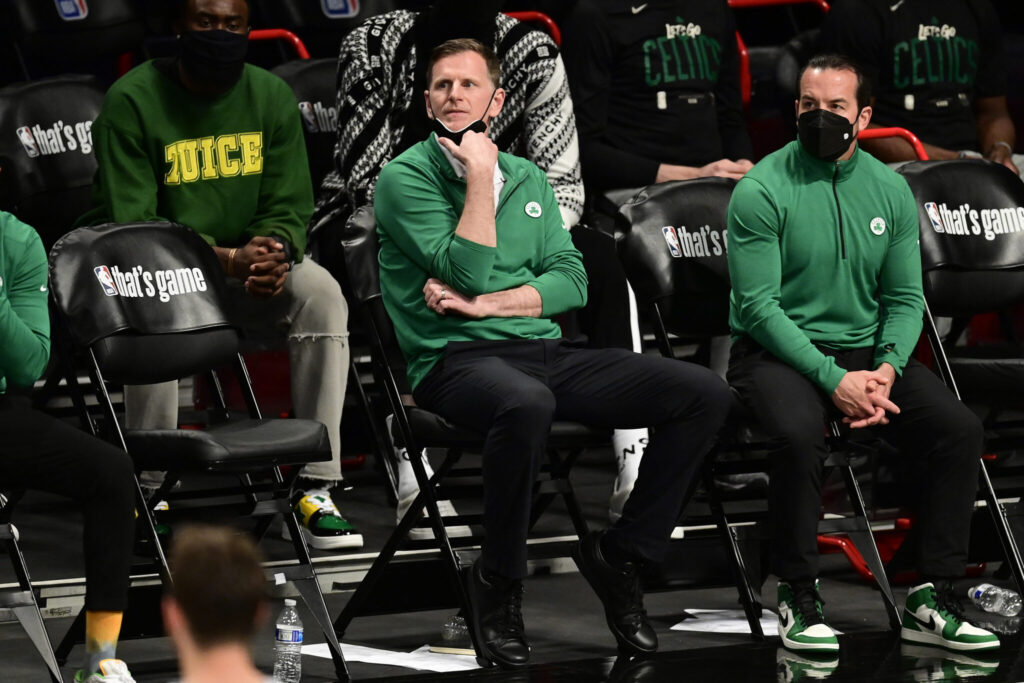 NEW YORK, NEW YORK - MAY 22: Assistant coach Jay Larranaga of the Boston Celtics looks on against the Brooklyn Nets in Game One of the First Round of the 2021 NBA Playoffs at Barclays Center at Barclays Center on May 22, 2021 in New York City. NOTE TO USER: User expressly acknowledges and agrees that, by downloading and or using this photograph, User is consenting to the terms and conditions of the Getty Images License Agreement. (Photo by Steven Ryan/Getty Images)
Share
Facebook Twitter Email

Brad Stevens and the Celtics will begin their extensive search for a new head coach after Stevens transition to the president role following Danny Ainge’s retirement today. Boston got a head start on the other teams as the first to move on from its coach, and the ability to lead Jaylen Brown and Jayson Tatum into the future is expected to make the job an enticing destination.

Stevens first needs to address his current staff who now fall into limbo under their old head coach and the new lead he’ll hire. No decision is made on what will happen to assistant coach Jay Larranaga and the rest of the staff yet, though Marc J. Spears reported Boston assistant Jerome Allen will be interviewed and Betonline.ag lists Larranaga (+300) as the favorite to succeed Stevens.

“The majority of my focus today and tomorrow is making sure I sit down with my coaching staff,” Stevens said. “And we talk about their next steps and what we can do. The biggest challenge in any of these transitions are the people who are affected by it, and we have an unbelievable group of people who have done a good job here and it’s my hope that we can have people around for longer. At the same time, if not, we want to help them in any way that we can.”

Larranaga is a Celtics assistant since 2012, before which he coached the Erie BayHawks, along with several roles overseas. Boston interviewed him after Doc Rivers’ departure in 2013 before Stevens’ hiring, and several colleges targeted him for head coaching jobs since.

Allen joined the Celtics in 2015 after coaching Penn since 2009. Scott Morrison, Jamie Young, Brandon Bailey and Joe Mazzulla round out Stevens’ bench, who now must weigh staying under a new head coach or seeking other opportunities. Celtics governor Steve Pagliuca stressed coherency in keeping Stevens in the organization, so the same approach may be made for the next head coach.

Stevens will interview candidates outside the organization though, Chris Mannix reported, which allows for the real chance to bring a new perspective to the locker room. Betonline’s leading candidates are Lakers assistant Jason Kidd (+500) and former Hawks head coach Lloyd Pierce (+600), who Chris Haynes reported will be options for Boston. Stevens spoke glowingly of Pierce in March amid his dismissal in Atlanta.

“They’re going to get to play for a great coach with some similarities, but also some great new fresh perspectives,” Stevens said of the Celtics. “I’m looking forward to finding that person… people can be reinvigorated by that… this is a great opportunity to give us a good spark when we’re losing one of the best at his job in the world.”