Celtics Take Over 1st in East with Win Over Wolves

The Celtics destroyed the Minnesota Timberwolves to take over 1st place in the East but lost Center Robert Williams to a sprained knee. 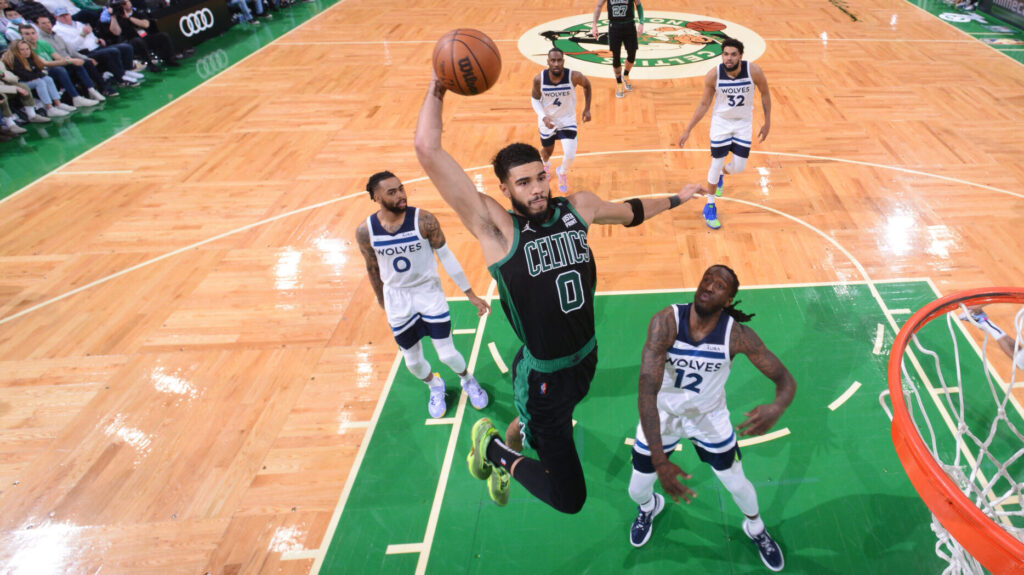 BOSTON, MA - MARCH 27: Jayson Tatum #0 of the Boston Celtics dunks the ball during the game against the Minnesota Timberwolves on March 27, 2022 at the TD Garden in Boston, Massachusetts. NOTE TO USER: User expressly acknowledges and agrees that, by downloading and or using this photograph, User is consenting to the terms and conditions of the Getty Images License Agreement. Mandatory Copyright Notice: Copyright 2022 NBAE (Photo by Brian Babineau/NBAE via Getty Images)
Share
Facebook Twitter Email

It was a little over 2 months ago, 70 days to be exact when the Boston Celtics hit rock bottom, falling to 11th in the Eastern Conference and out of the play-in tournament. Since that point the Celtics have gone 25-6, including a 134-112 win over the Minnesota Timberwolves Sunday at TD Garden – and now sit atop the East with only 7 games left to play in the regular season.

Jayson Tatum scored 34 points and Jaylen Brown had 31 points and 10 rebounds in the win over the Wolves, the Celtics sixth straight.

However, it wasn’t all good news for Boston. Center Robert Williams limped off the court at the end of the third quarter with the Celtics up 26, and did not return. He was immediately ruled out with a left knee sprain. Head coach Ime Udoka was light on specifics but did say after the game that Williams was in considerable pain. Williams will undergo tests on Monday to determine the extent of his injury.

Robert Williams III: Rob Williams had 13 points and 10 rebounds prior to exiting with an injury. He shot 6 of 7 from the field and added a block and a steal.

The Bench: Another solid performance from the bench which pumped in 42 points. Derrick White dropped 15 points, shooting 4-6 from the field, to go along with six assists. Payton Pritchard ended with 11 points and shot 3-5 from 3-point range.

Karl Anthony Towns: Towns started the game off going to town on Grant Williams, who started in place of Al Horford. Towns had 12 points in the first quarter but was limited to seven after that.

Up 4 After one the Celtics scored 13 of the first 15 points in the second quarter to open a double-digit lead they never relinquished. Boston led 72-49 at halftime and never led by less than 18 the rest of the way.

About halfway through the 3rd with the Celtics up 20 Boston went for a little razzle dazzle.

The play was started after Robert Williams came up with a loose ball off a contested three. Williams tapped the ball ahead to Marcus Smart who started a fast break and finished it by tossing the ball off the backboard to Jaylen Brown for the alley-oop slam. Watch the play down below.

That’s what he said…

“Don’t know exactly what happened,” Udoka said after the game. “He said it wasn’t even a specific play that he remembers, but came out of the game, had some pain, obviously went back to get checked out and was in quite a bit of pain, and he’ll get scanned in the morning and we’ll know then.”