The Celtics moved up to No. 2 in the east with a win over the Grizzlies and Bucks loss, setting themselves up with the winner of Nets/Cavaliers. 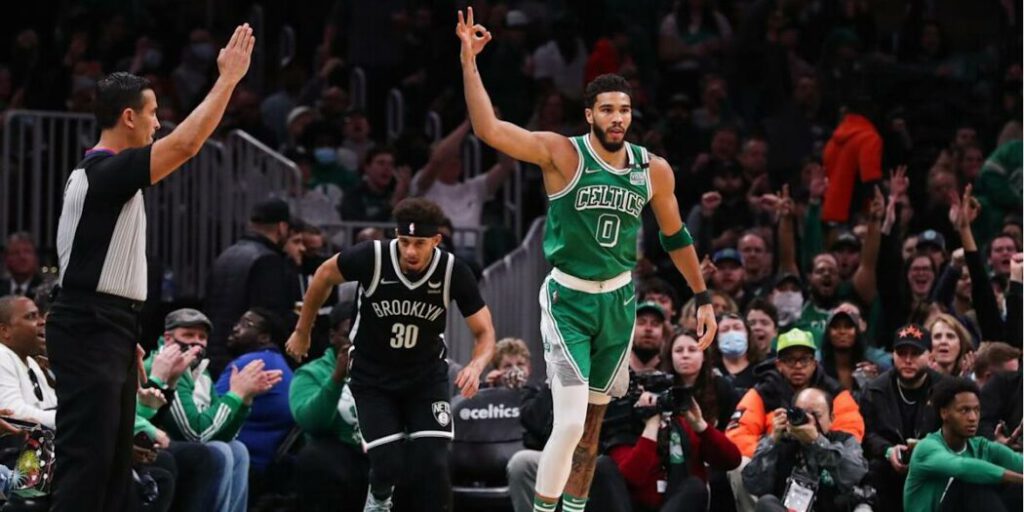 The Celtics will await the winner of the No. 7 vs. No. 8 leg of the east’s play-in tournament after securing the No. 2 seed in the eastern conference through a series of tiebreakers over the Bucks and 76ers. Boston finished 51-31 after beating the Grizzlies, 119-81, Memphis resting nearly their entire regular rotation.

The Nets host the Cavaliers in the one-game play in for the No. 7 seed on Tuesday at 7 EST on TNT. The winner will move on to play the Celtics in Game 1 of the first round in Boston on either Saturday or Sunday.

Boston had fallen one game back of Milwaukee, in a tie for No. 3 with Philadelphia, after losing to the Bucks on Thursday, 127-121, in a game where they rested Al Horford and Jayson Tatum on a second half of a back-to-back. The 76ers beat the Pacers to tie Boston for No. 3, the Celtics maintaining a tiebreaker over Milwaukee and Philadelphia, but facing the risk of falling to the No. 4 seed and a first-round series against the Raptors if Boston lost on Sunday.

Then — Milwaukee decided to rest Giannis Antetokounmpo, Khris Middleton, Bobby Portis, Brook Lopez and others in their season finale, losing 133-115 to Cleveland in their season finale. The loss opened three scenarios for the Celtics, winning and rising to No. 2, with Philadelphia’s simultaneous tip-off against the Pistons at 7 EST. Ime Udoka decided to play his starters in Memphis, due to Boston’s long layoff between last Wednesday’s last full effort in Chicago and this weekend’s Game 1. The team couldn’t pick one result or the other. If the Sixers won and Boston lost, the Celtics would fall to No. 4 in the east. A Philadelphia loss, however unlikely against a short-handed Detroit lineup, would position Boston at No. 3 against the Bulls in round one.

“We’ll do what we do and let the chips fall where they may,” Udoka said pre-game.

Tatum made quick work of the Grizzlies by halftime, hitting 11 of his first 14 shots on his way to 26 first-half points. He hit back-to-back threes in the final minute of the second quarter, the second through a foul, before securing a steal and feeding Payton Pritchard for two free throws that turned a 17-point Celtics lead into a 26-point advantage.

Early efforts by Kyle Anderson and John Konchar only kept the Grizzlies within single-digits for little more than one quarter. Horford scored three baskets early in the second, Pritchard buried a pair of threes and Derrick White scored six straight points to break what was a seven-point game through 12 minutes into a 16-point runaway minutes later. Memphis, locked into the west’s No. 2 seed and beating New Orleans 141-114 the day before, sat Ja Morant, Dillon Brooks, Jaren Jackson Jr., Steven Adams and Tyus Jones, while Desmond Bane and Brandon Clarke didn’t play despite entering as active.

Boston effectively had a clear path to rise or fall in the east after the early Milwaukee result. They took home court advantage through the first two rounds, which now project to line them up against two star-studded opponents in Brooklyn, then the Bucks in round two who’ll be a heavy favorite against Chicago in round one.

The Celtics edged out the Nets, 126-120, in the only full effort between both teams in their current constructions last month. Robert Williams III played in that game, posting 10 points and eight rebounds, and while he hasn’t been ruled out of the first round entirely (meniscus surgery), the Celtics don’t expect to have him.

“We’re all aware of what’s going on. I don’t think anybody can not be aware. I just think that everybody’s so close, that you don’t really know. One game could change, like we were at first at one point, next thing you know we’re fourth. So each game’s important, we’ve just got to stick to keep hooping each game,” White told CLNS Media in Milwaukee on Thursday. “Wherever we’re at, we’re at.”