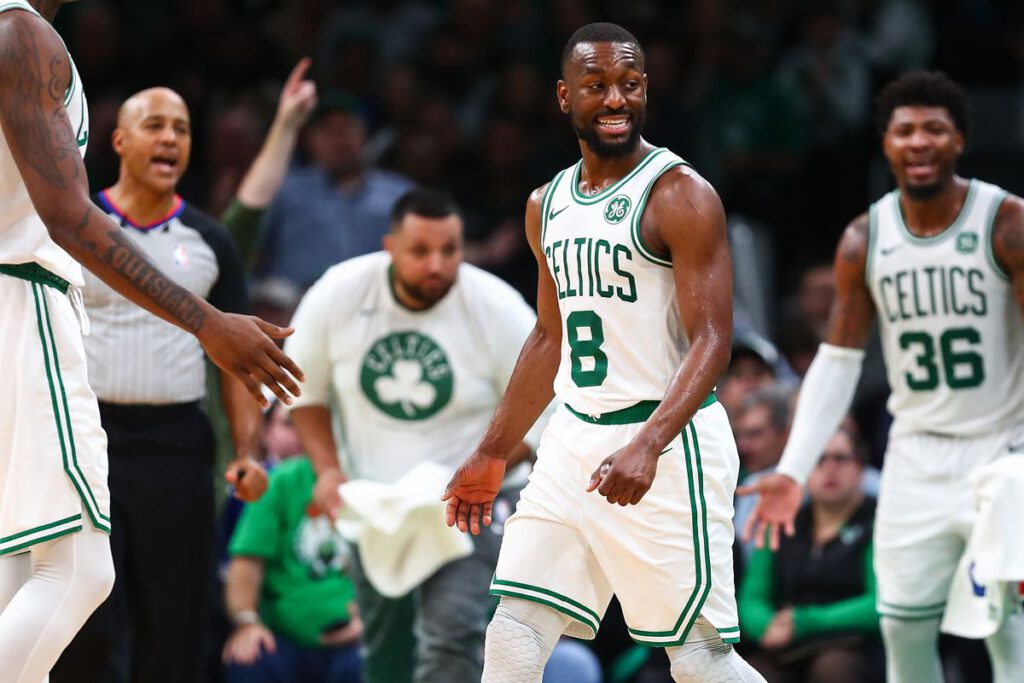 For most Celtics fans, Wednesday night’s 116-105 comeback win over the Bucks at TD Garden felt all too familiar.

Before Kemba Walker, before Kyrie Irving or Jayson Tatum, Jaylen Brown and Gordon Hayward, the Celtics were a group of overachieving underdogs with Brad Stevens at the helm, who instilled a culture within his guys. And Marcus Smart personified it; he was the heart and soul of those scrappy teams with a never-give-up attitude, he anchored the gritty bunch of unproven youngsters that included guys like Jae Crowder, Evan Turner, and Isaiah Thomas, who eventually emerged as an MVP candidate and one of the league’s most captivating figures in light of his 5-foot-9 frame and fearless style of play.

Not a lot has changed in terms of what Smart means to his team (aside from making 3-pointers), still, seeing the Celtics climb out of a 19-point hole Wednesday felt nostalgic. And it wasn’t solely because the teams of 2014-17 were infamous for making humongous comebacks throughout its era but rather Boston’s approach on both ends of the floor.

Defensively, it started with taming the league’s reigning MVP in Giannis Antetokounmpo and was eventually followed by clamping down on Milwaukee’s perimeter shooters — which led to the momentum shift the Celtics needed to make its run in the second half. Offensively, the Celtics were fluid with their ball movement, it didn’t stick in the hands of guys like Tatum, Walker, Hayward or Smart but when it was their turn to strike they didn’t disappoint.

With all eyes on The Greek Freak, guys like Eric Bledsoe, Pat Connaughton, and George Hill lit the Celtics up from deep, including five 3-pointers in the opening frame and it eventually propelled the Bucks to grab a 19-point, first-half lead. Challenging Milwaukee to beat them from the perimeter backfired, but the reason why the Celtics’ defense on Giannis made a big difference Wednesday night was because of its consistency, it made things tougher for Antetokounmpo when his team needed him most — in the final frame.

After Tatum and Hayward combined for 4-of-20 from the floor in the first half, they each connected on a pair of 3-pointers at the start of the third quarter and the well eventually ran dry for the Bucks’ perimeter shooters. Boston ended up outscoring its opponent, 74-47 in the second half.

The Celtics shifted their offense from its players taking turns attacking the rim to playing with a fluid flow via pick-and-rolls and backdoor cuts — possessions that started with less dribbling and ended with clean open looks.

This was discussed in the Celtics locker room during halftime.

“Just move the ball,” Smart said was the main talking point before the start of the second half. “Continue to move it. The shots will fall and like I said earlier we can’t let offensive woes dictate our defense.”

Ball movement was key in the second half, but most importantly, trusting one another was, as well, and that’s what we saw from the Celtics. It didn’t matter whose hands the ball landed in, as long as the look was a good one — that’s all that seemed to matter in that dramatic second half.

Walker echoed Smart’s comments about his team’s offense and how important it is for the Celtics to remain consistent on the defensive end of the floor.

“For us, it was more so not letting our offense dictate our defense,” Walker said after the win. “I think at times in these early games we’ve got so down on ourselves because we haven’t been scoring. When you work so hard in the summer on some shots and you miss them, routine shots early, it frustrates you. You have to understand you have to stay in the game, those shots are going to come for us. We’re going to find rhythm at some point but it takes time.

“We have to stay together and let our defense dictate our offense and that’s what we did. Whenever we got stops we got the rebound, we pushed the basketball and made the right play. You know, we have a bunch of unselfish guys and it was an unbelievable comeback.”

Walker (32), Hayward (21) and Tatum (25) combined for 78 points while Smart netted 19 points, including five 3-pointers to go with his 6 assists and 4 rebounds. Walker also dished out 6 assists and pulled down 6 rebounds and Hayward also came three assists shy of a triple-double (10 rebounds, 7 assists).

Khris Middleton scored a team-high 26 points on 10-of-15 from the floor and Antetokounmpo finished with 22 points on 8-of-13, including 6-of-10 from the free-throw line.

For Stevens, the manner in which his team was able to come together at the break was encouraging but he’s not reading too much into one win in October.

“The key is how you handle good nights and then how you handle the storms that are coming inevitably in the season,” Stevens said. “I’m really encouraged because when this team was in halftime they were saying all the right things, they were thinking all the right things. I thought at the end of the second quarter we wanted to cut into that lead so bad we were just trying to hit it out of the park every time we shot.

“Finally, we settled down and just hit singles and just played the right way and at least you give yourself a chance. The guys really competed, played a really good team. I don’t think it necessarily tells much, we are only four games in.”

Much like the Celtics teams of yesteryear, expectations aren’t through the roof the way they were one year ago, and perhaps that’s a good thing. This is a much more talented, top-heavy group with plenty of upside and Stevens knows how important it is to carve out bad habits as early as possible because of what he went through during his earlier years.

But it also goes back to the importance of becoming a top-notch defensive team. It was the biggest reason why those past teams found success and should certainly be a goal for this year’s group.

Boston (3-1) will look to capture its fourth straight win when they host the Knicks Friday night at TD Garden.