Ben Simmons could reportedly return for the Celtics and Nets' first-round playoff series. Boston, at its first practice, had its focus elsewhere 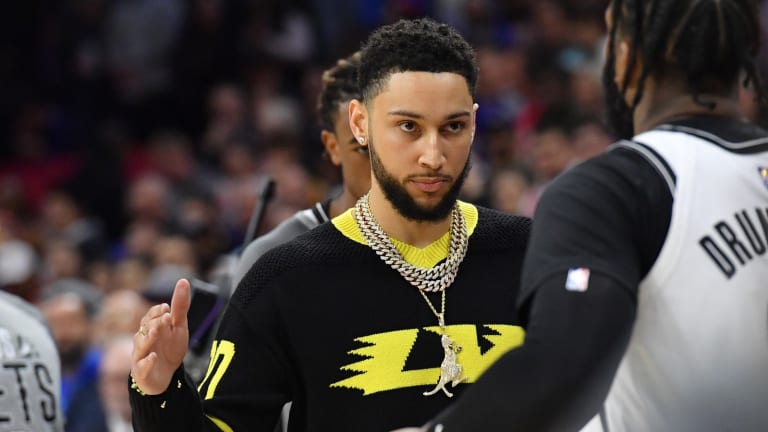 BOSTON — The Nets remain coy about the possibility of a Ben Simmons return for the NBA Playoffs now that they’ve earned the No. 7 seed and a first-round berth against the Celtics. They’ve ramped him up slowly since his arrival in the James Harden trade. A back injury popped up early in that process that sidelined him completely, forcing him to receive an epidural injection one month ago.

Between a preseason hold out to receive his trade demand and mental health leave that followed in Philadelphia, then that injury in Brooklyn after being dealt before the deadline, Simmons didn’t play a single game this season. He last took the court on June 20, 2021 to cap his infamous playoff demise in the second round against the Hawks. 277 days ago. Two fourth quarter shot attempts in seven game. The record worst 34% mark from the free throw line. Passing up the wide open Game 6 dunk. The world’s kept turning and the Celtics’ focus, for now, is fixated elsewhere.

Jeff Goodman reported on CLNS Media’s Goodman and Ryan Podcast that the former all-star will begin his attempt to erase everyone’s memory of his iconic meltdown in Boston on Sunday when the Celtics host the Nets in Game 1 of the eastern quarterfinals series. Steve Nash pushed back against the multiple reports of Simmons’ looming return on Tuesday, saying Simmons still has no timetable and needs to check several boxes before one is created. The Celtics, with no film on how Brooklyn would use Simmons, are focused on Kevin Durant and Kyrie Irving, Brooklyn’s two available superstars, before they think about Simmons.

“With Ben, you never really know from day-to-day whether he’s playing or not,” Derrick White told CLNS Media at practice on Wednesday. “When they say he’s playing, I’m sure the coaching staff will have a game plan for us and we’ll have to adjust on the fly for something we haven’t really seen this year. The playoffs, it’s game and then you get some time to make adjustments. So there’ll be time.”

Simmons sent out his own optimistic signal on Wednesday as the Celtics concluded practice, posting a short Instagram story of his basketball shoes tied on his feet, presumably during Brooklyn’s practice. Shams Charania indicated a Simmons return would more likely come in the Game 3-4 range. Joe Vardon and Alex Schiffer, also of The Athletic, reflected sentiment closer to Nash’s that Simmons isn’t nearing a return.

The Celtics started to run through new packages and scout Nets personnel who are certain to take the court on Sunday afternoon. Boston is healthy, Robert Williams III aside, who was only visible exiting the gym in the back of Boston’s practice facility. He’s progressing each day, Ime Udoka said, doing shooting drills and some contact work in good spirits, but isn’t expected to return in this series despite a spread-out schedule that falls in line with the 3-4 week window Udoka, Brad Stevens and reports have mentioned optimistically in past weeks. The door is open, Udoka told CLNS Media last week, if Williams III feels he can return.

Last year’s defensive player of the year runner-up would project to help a Nets team sooner, one that ranked No. 20 on that end, especially considering Simmons’ past success against Tatum. That came a long time ago now, Simmons holding Tatum to 3-for-7 shooting over one year ago in April in their lone meeting. The year prior, Tatum shot 6-for-22 when guarded by Simmons. Tatum has since emerged as a favorite to make this year’s All-NBA First Team. Simmons is progressing through one-on-zero work, according to Nash.

“I mean honestly, if that happens we cross that bridge when we get there,” Tatum told CLNS. Right now, we’re just focusing on the guys that they have available.”

The Nets had ruled Simmons out for the play-in tournament well ahead of Tuesday, as he once again sat courtside in his Prada jacket and shorts. He’s been seen pregame hitting shots from mid-range in practice and before games. Brooklyn assistant and former NBA sharpshooter Kyle Korver has worked with Simmons at the Nets’ practice facility, but through his absence and early time around his new team it’s hard to gauge what Simmons they’ll receive. Whether the same, a transition maestro and one of the league’s best defenders in spite of his offensive limitations, or worse, a rusty, hesitant shell of himself after one year away from NBA games.

Brooklyn is making sure it’s closer to the former if he’s going to be involved in a series against superstar scorers in Tatum and Jaylen Brown. A smaller role would make sense, perhaps even off the bench for roughly 20 minutes given the necessity of Curry’s shooting and Bruce Brown’s recent emergence as a pick-and-roll finisher and passer in the starting lineup.

Simmons could either handle the ball, unlikely next to Durant and Irving, play Brown’s role, which we haven’t seen from him in his career, or stand in the dunker’s spot, which could disrupt spacing. A mix of all three in staggered bench units is easiest to imagine, along with some spot defensive assignments. Brooklyn projected to be one of the best destinations given the two star’s ability to take the heat, attention, scoring, shooting and leadership burden off Simmons and let him be himself in a downsized role. They can afford a luxury and it’s easy to imagine another player in a Nets uniform receiving more heat at TD Garden.

Still, it’s hard to tell who that will be when the players involved have had full seasons under their belts, and Simmons arrives just getting his feet under him and his role figured out. Udoka, Simmons’ former coach in Philadelphia during 2019-20, knows he could be a factor, but for now, he’s in the back of the Celtics’ minds.

“It’ll be hard to emulate that that with him being with Brooklyn, because we haven’t seen him used with him. Obviously, I coached him two years ago and a lot of guys have played with or against him, so we know what he is. Obviously, being off for a year, there’s going to be some rust there as well as some unpredictability as far as how they’ll implement him with their team, but we know his game, we know what he does and unless some things happened the last year, we know how to attack him and manipulate certain things as far as that. It’s tough, because he hasn’t played with that team, so who knows how he’ll be used by them.”