The Celtics continue to evade vaccination questions and the uncertainty threatens to tank the season. 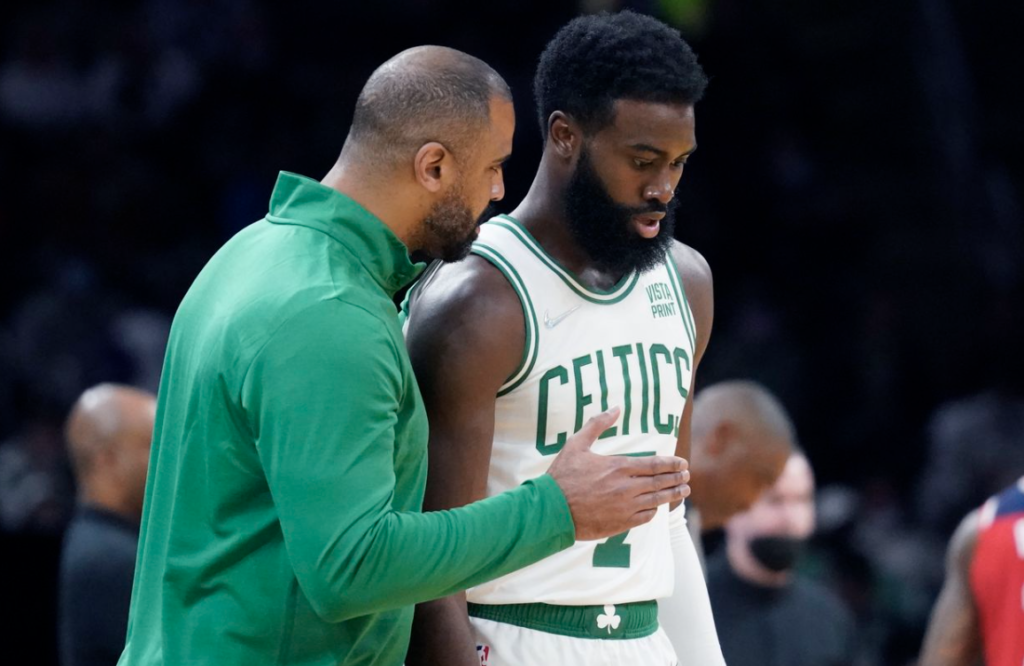 The Celtics have a Covid-19 problem, whether they want to admit it or not. And not talking about it or trying to avoid the issue altogether won’t make it go away.

For the past week the team has danced around questions about whether all their players are fully vaccinated. Should the Celtics draw the Raptors in round 1 of the NBA Playoffs, unvaccinated players would not be eligible to play in Toronto due to Canada’s vaccine mandate.

On Sunday it was Jaylen Brown doing the covid shot shuffle when asked about his vaccination status. Brown’s status has been unclear since before the season when he declined to confirm whether or not he was vaccinated.

Back then the question was not relevant to basketball. Now it is.

“Last year, I missed the playoffs, I had a season-ending injury with my wrist,” Brown said when asked about his availability to play in Toronto. “And this year, from a competitive standpoint, I’m excited and ready to play against anybody. As the vice president of the Players Association, it’s a part of my job description to protect our players’ rights and our medical privacy so you won’t hear me comment on my status or anybody else’s. That’s how I feel about it.”

Problem with this answer is well, it’s bullshit.

The President of the NBPA, CJ McCollum has openly discussed his vaccination status and produced a PSA urging others to get the jab. Similarly, Brown’s teammate and fellow VP of the NBPA Grant Williams has publicly declared that he is vaccinated. Kyrie Irving, also a union VP very famously has talked about his decision to not get the shot.

Brown speaks of ‘medical privacy’ regarding vaccines while openly discussing wrist surgery, a procedure far more intimate and invasive than a two second jab in the arm. If Brown wanted to divulge his vaccinations status, he could. He is using his role as a union rep as a shield to avoid responding to a question he doesn’t want to answer.

Brown’s obfuscation aside, the larger issue at hand – and the only one that really matters – is his availability. What does “excited and ready to play” actually mean? Brown may be ‘excited’ and feel  ‘ready’ but that does not necessarily mean he is vaccinated or eligible to participate in games in Toronto.

Head coach Ime Udoka and teammate Al Horford gave similarly vague responses when asked the same question earlier in the week. Udoka said that all the players “if healthy, are available to play.” When asked about his status Horford said he would “be able to be ready to play wherever.”

The reason Horford and Brown are the ones on the receiving end of these questions is because they have yet to publicly confirm their vaccination status, and both missed the Celtics ‘most recent game in Toronto. Brown with a ‘knee injury’ and Horford for personal reasons, leaving it unclear whether they could have played even if they wanted to.

Chris Mannix of Yahoo reported last week that the two were not yet vaccinated and later clarified that they had not declared it. On Sunday the Boston Globe’s Gary Washburn wrote that “at least two frontline players are not vaccinated.” Exactly which two is not clear, but Jayson Tatum we know is vaccinated, and all other players –  save for Robert Williams who is injured – made the most recent trip to Toronto.

That leaves Horford and Brown.

The reality is, teams with 100% vaccination coverage have openly boasted about it. Both the Miami Heat and Milwaukee Bucks, two teams that could end up facing Toronto in round-1 have confirmed that all their players are fully vaccinated.

The Celtics, for their part refuse to comment. Team President Brad Stevens has declined to confirm whether all his players are vaccinated and doubled down on the team’s commitment to personal privacy last week during a radio interview.

Well actually, they have. Before the season began head coach Ime Udoka contracted Covid-19. A press release sent out by the team stated that it Udoka’s was a breakthrough infection and detailed his symptoms. A short while later Al Horford contracted Covid. The team announcement did not mention Horford’s vaccination status nor Jaylen Brown’s when he caught the virus a month later.

To put it plainly, the Celtics, Udoka, Brown, Horford are dodging this question because they do not want the answer to be known, not because of any league, union or team mandate.

It’s understandable the organization would want to protect the status of unvaccinated players to spare them any potential public scorn and derision. It’s also possible the team knows that any currently unvaccinated players plan to get the shot in time to make them eligible to play in Toronto in round 1. The earliest a game north of the border could take place is April 20th.

In Canada, a player must be 14 days clear of a single dose vaccine or the second shot of a two dose vaccine to be technically vaccinated. That deadline is fast approaching, and given the tight jumble in the East standings it is unlikely there will be enough clarity before the season’s final game on April 10th. If the Celtics wait that long find out whether Toronto is the first round opponent, it will be too late.

If the ‘wait til the last minute’ path is the one the Celtics have charted, no harm (outside of any public health concerns) no foul. But if there are any unvaccinated Celtics players who pull a Kyrie Irving and refuse to abandon their stance regardless who the Celtics play in round 1, well that could tank the whole season and render the team’s recent stretch of inspired and dominant play obsolete.

The Celtics have been an absolute wagon since late January and when fully healthy a legitimate contender to reach the NBA Finals. They will already be without Robert Williams for at least round 1 as he recovers from knee surgery. Missing two or more additional frontline players on the road – certainly ones as valuable as Brown and Horford – would make it extremely difficult to defeat any playoff caliber team in a 7-game series.

Again, it may not be an issue. Are they hiding something or nothing at all? Are they confident any issues that may exist now will be resolved in time?

We don’t know. Heck, they may not fully know. But unless the picture clears up quickly, it threatens to derail the entire season and any lofty championship aspirations before they have a chance to get off the ground.