The Celtics signed Bruno Caboclo and Noah Vonleh to training camp deals in hopes one of them could emerge at the big man position. 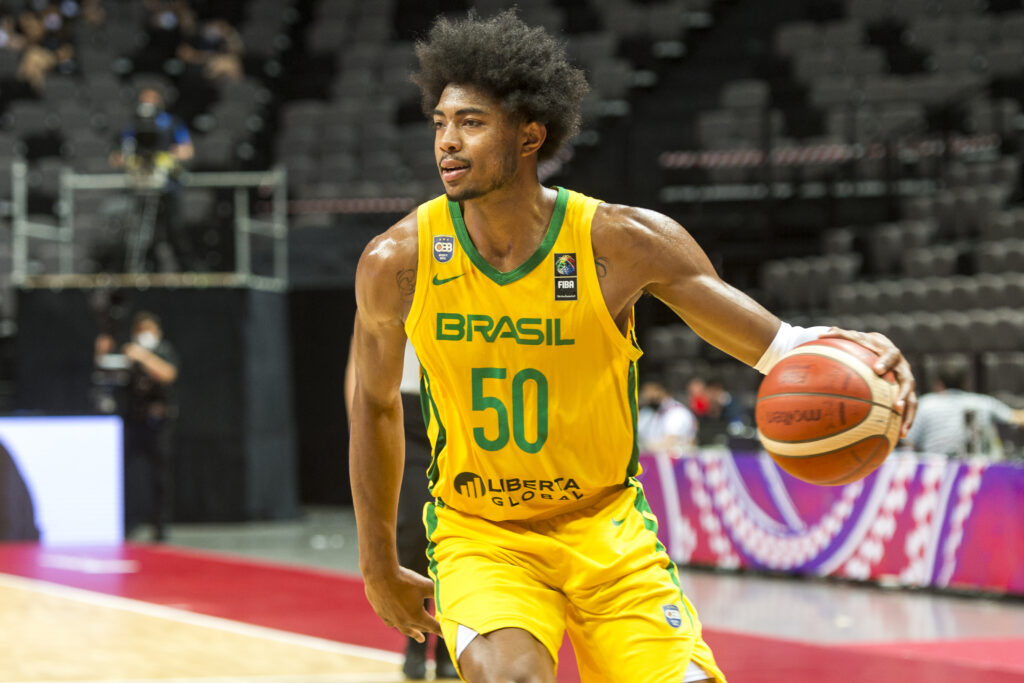 The Celtics added veteran big men Noah Vonleh and Bruno Caboclo to training camp deals this week, providing both players chances to enter the mix in Boston’s front court this fall after they spent the 2021-22 season overseas. Vonleh and Caboclo filled two of the six offseason available roster spots available (max 18 plus the pair of two-way contracts) to the Celtics, so the team can still add three full-time contracts and another training camp invite.

Both players got selected in the first round of the 2014 NBA Draft, stand roughly 6-10 and boast wingspans longer than 7-0. At 26-years-old, neither player has found their NBA footing, but Caboclo achieved two-way productivity on the way to a MVP award in Brazil’s top league with São Paulo F.C. while Vonleh had a productive season with the Shanghai Sharks. They’ll join Luke Kornet, signed for 2022-23, and Mfiondu Kabengele on a two-way contract as the Celtics try to piece together spot minutes at the five that Enes Freedom and Daniel Theis played behind Robert Williams III and Al Horford.

The Celtics expect to play more small ball this season with the additions of Malcolm Brogdon and Danilo Gallinari. They’ll still need size to round out the rotation though, and while Williams III and Horford successfully staggered each other’s minutes last year, an added burden fell on the other when the other exited the lineup. Horford, 36 this season, will likely need more minutes management. Williams III, despite an injury history, continues to receive encouragement from Ime Udoka to give Boston more. Another minutes bump for the emerging defensive player of the year candidate is a likely motivator behind the Celtics’ assuredness with their current front court.

There also haven’t been options that have peaked the team’s interest, whether aging veteran free agents like Dwight Howard, Demarcus Cousins and Hassan Whiteside or high-cost trade targets. The expiration of the $17.1-million trade exception last month further limited the Celtics’ avenues to add a center, but they maintain $5.9-million and $6.9-million exceptions until the trade deadline if an emergency arises. They’re remaining patient and both Stevens and Udoka emphasized their belief in Kornet, who has $300k of his $2.1-million contract become guaranteed on Aug. 15 before an escalator to $1.1-million on opening night. Kornet averaged 11.9 PPG, 7.6 RPG, 3.9 APG and 2.6 BPG on 50.6% shooting in 10 games with Maine last season.

Enter Caboclo after a productive Summer League with the Jazz, where he almost exclusively played the five after entering the league with more wing tendencies. He averaged 12 points, 6.4 rebounds and 1.2 blocks per game on 60.5% shooting, a cut above his 40.3% mark from his first four stops between Toronto, Sacramento, Memphis and Houston. His 30% efficiency from three fell in line with his past NBA production, but focusing on rim looks increased his overall productivity and his bulkier frame pointed toward a commitment to the interior. Caboclo, Kornet and Vonleh all fill the screening, dribble handoff, rim protection roles the Celtics desire at the five.

Caboclo’s 7-7 wingspan allows him to effectively raise his arm and throw down dunks, but his past propensity to over-dribble, launch jump shots and float, along with a thinner frame, limited him to 4.2 PPG and 2.6 RPG in seven NBA seasons. Last year, he posted 18.3 PPG, 8.4 RPG and 2.1 BPG on 52.8% shooting in 44 games., including a nine-game postseason run where he averaged 23.9 PPG, 11.1 RPG and 3.6 BPG on 63.6% FG. He’s not a traditional big and that could be what the Celtics like, with the potential he could mold into a more versatile role than the veterans on the free agent market could provide while being willing to accept no regular minutes.

Despite his strides, Caboclo may just be below the NBA talent threshold given his many past attempts at breaking into the league. The same could be true for Vonleh, who grew up in Haverhill, though he had the lone productive NBA season between the two players in 2018-19 with the Knicks, when his cutting and downhill activity allowed him to score 8.4 PPG with 7.8 RPG on 47% shooting.

Vonleh, the former No. 9 overall pick out of Indiana, entered the league with more muscle and skills than Caboclo and similarly struggled to shoot (30.8% 3PT) while bouncing from Charlotte to Portland, Chicago, New York, Minnesota, Denver and a brief Brooklyn stint before falling out of the league.

Vonleh’s season in China looked similar to his NBA role, facing up, attacking the basket off the dribble, making sharp cuts to the rim and banging inside for buckets and boards. He averaged 14.4 PPG, 9.2 RPG, 2.1 APG, 1.8 SPG and 1.3 BPG on 45.1% with the Sharks. More of a wing in the past, Vonleh, like Caboclo, could make the shift to a more interior role with more versatility than a traditional center, though his low efficiency around the basket makes him a less intriguing prospect than Caboclo, who can legitimately protect the rim.

Vonleh flashed more playmaking ability, whether on or off the ball, as a movement driver and his past success in a bit of a garbage man role could position him as a depth backup wing and big.

The Celtics still have that need at wing, and with three open roster spots both players could make the roster. Whoever performs better in dribble handoff actions, Boston’s defensive scheme and the added bonus of some shooting will prevail if only one signs full-time.

Bringing Juhann Begarin over from France remains an option, and Jay King reported the team is intrigued by its Summer League forwards Justin Jackson and Brodric Thomas, who both played in short stints for the team, Thomas on a two-way deal. Matt Ryan, King wrote, is less likely to return to the Celtics after joining the team on a two-way deal after the trade deadline.

Boston announced its preseason slate will begin on Oct. 2 against the Charlotte Hornets, followed by the Raptors and then road games against both teams. We’ll likely see all these players compete there.