The Ime Udoka suspension and uncertainty surrounding it will force the Celtics to rally as a team and stabilize organizationally. It's a tall task. 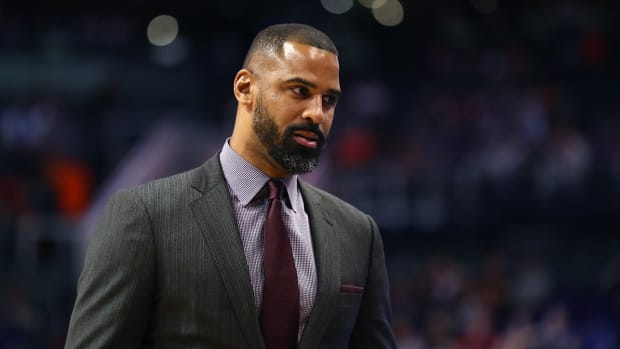 The Ime Udoka era in Boston could be over after just one season.

The Celtics announced a one year suspension of Udoka for having what Shams Charania and Adrian Wojnarowski reported was an improper relationship in violation of team rules. Udoka declined to resign this afternoon, according to Chris Haynes, as he awaited the punishment and a brief comment from the team nearly 24 hours after Udoka’s alleged transgressions became public.

Now, with Joe Mazzulla poised to lead the team in an interim role and with Udoka’s future undetermined, it’s worth questioning whether Boston’s head coach can ever return to the bench after an ugly week for Udoka and the organization. It’s one of numerous unknowns in the aftermath of Udoka’s suspension that calls for some transparency for the public, NBA community, or at the very least the Celtics’ employees.

Rampant speculation and the team’s silence led to an environment of misinformation festering online on Thursday regarding the nature Udoka’s alleged behavior and who the female staffer would’ve been. Marc Spears reported Celtics Vice President of Player Development and Organizational Growth Allison Feaster was not involved in the allegations after her name, among others in the organization, got smeared across social media. Boston’s front office masthead became unavailable online on Thursday afternoon. The damage had been done.

The Celtics moved in recent days to address what Wojnarowski reported was a breach of trust, judgement and leadership by Udoka that team president Brad Stevens became aware of this week. The organization settled on a significant punishment, perhaps the largest ever for a coach or front office official. Udoka’s behavior did not rise to the level of an NBA matter, but the Celtics had to address any inappropriate dynamics in their workplace. They reacted as forceful as possible short of a firing.

That could be the correct decision if they have a clear zero tolerance rule for internal relationships. The fixation on the identity of the female employee showed why an organization, particularly in a sports industry long dominated by men, would outlaw relationships between staffers. It’s necessary to deter situations where men in leadership position demand reciprocation of their advances for opportunities.

Udoka, as a major authority figure in the organization, should be held to a high standard given the power he holds over numerous team employees. We don’t know enough about the accusations to say Udoka leveraged his role, but even consensual relationships, as Charania described Udoka’s, could carry unstated expectations and unintended consequences. Udoka’s private life may be none of our business. Bringing it into work had the potential to impact the careers of women who should be free from advances by male authorities in any work setting, but particularly in sports.

We’ll likely never know exactly what happened. It stands to reason the Celtics wouldn’t have initiated this messy process without a significant reason. It’s one of the unknowns worth reserving judgement on for now.

One of the major questions the Celtics have to answer into next week includes why didn’t the team fire Udoka if what he did rose to this level of punishment? When did they know of the violation and for how long? It’s unclear why the details of the violation leaked and the allegations played out publicly when it could’ve been handled internally. Though leaks may not have been a team prerogative, it further calls into question how united they moved toward this direction and the viability of Udoka eventually returning and leading the roster.

Boston alerted players of the situation over the past 24 hours, Brian Windhorst reported, and they haven’t commented since the leadership structure on the court got upended entering a critical season. Wojnarowski said on SportsCenter shock engulfed the organization and frayed trust between Stevens and Udoka.

Mazzulla is another question, reportedly becoming the Celtics’ interim coach after joining Stevens’ staff in 2019 and staying on through Udoka’s hiring. Jayson Tatum advocated for Mazzulla during that process and Mazzulla played a role alongside Udoka and his assistants in changing the team’s culture, system and habits on the floor. Assistant head coach Will Hardy departed to coach the Jazz this summer, and Utah interviewed Mazzulla for that job before hoping to have him join Hardy’s staff.

“I love Joe,” Tatum said at the NBA Finals. “Just being around him for his second or third year, you can tell how passionate he is about the guys and his craft, and he’s gotten so much more knowledgeable and more detailed and just more vocal and more comfortable in his role as a coach. You’ve seen that growth from his first year and he’s helped me out tremendously as a player and as a person. I can’t say enough good things about Joe and everybody appreciates what he brings to this team and I’m glad that we have him.”

Even if Mazzulla, Damon Stoudamire, Ben Sullivan and the rest of Udoka’s coaching staff maintain his key philosophies and relationships, the Celtics lost the voice that guided them through the ups-and-downs of last season. Udoka’s ascent marked the key to the team’s turnaround and he set a tone with his emphasis on accountability, passing and defense. His experience coaching under Gregg Popovich, managing stars and winning an NBA Finals brought valuable perspective and cachet to the room. Udoka lifted the team up through a poor start and playoff deficits, raised Tatum and Jaylen Brown’s playmaking ability and received rave reviews from his players for his perspective.

The roster’s reaction to this suspension determines what it means on the court and for Mazzulla. Beyond large basketball expectations, he becomes a voice for the organization through trying times. That’s a difficult task for a 34-year-old. Stevens and higher-level leadership need to assist with whatever transparency possible to rebuild trust with employees and players while making it clear that they made the appropriate decision. Players will need to believe that.

Udoka took responsibility for his actions in a statement to ESPN and accepted the punishment.

Opening night is less than one month away. The team has returned to the Auerbach Center and needs to pivot toward a second head coaching change in consecutive seasons. Danilo Gallinari and Robert Williams III underwent their surgeries Thursday that’ll sideline them through that process. The NBA Finals trip Udoka stressed coming back better from moments after the Game 6 loss won’t be realized on his end, with the Celtics now forced to rally internally without the coach who formulated much of their identity.

This wasn’t a basketball issue. It’s a workplace issue. While the Celtics appear to be taking difficult steps with basketball consequences to maintain the work environment a team like the Suns failed to promote, the uncertainty an embarrassing day cast over Udoka’s future, team decision making, players and especially Boston’s female employees hurts. More steps inevitably lay ahead to stabilize the franchise.