A Twitter study conducted by BetOnline shows that Celtics fans want to keep Jaylen Brown in green at all costs. 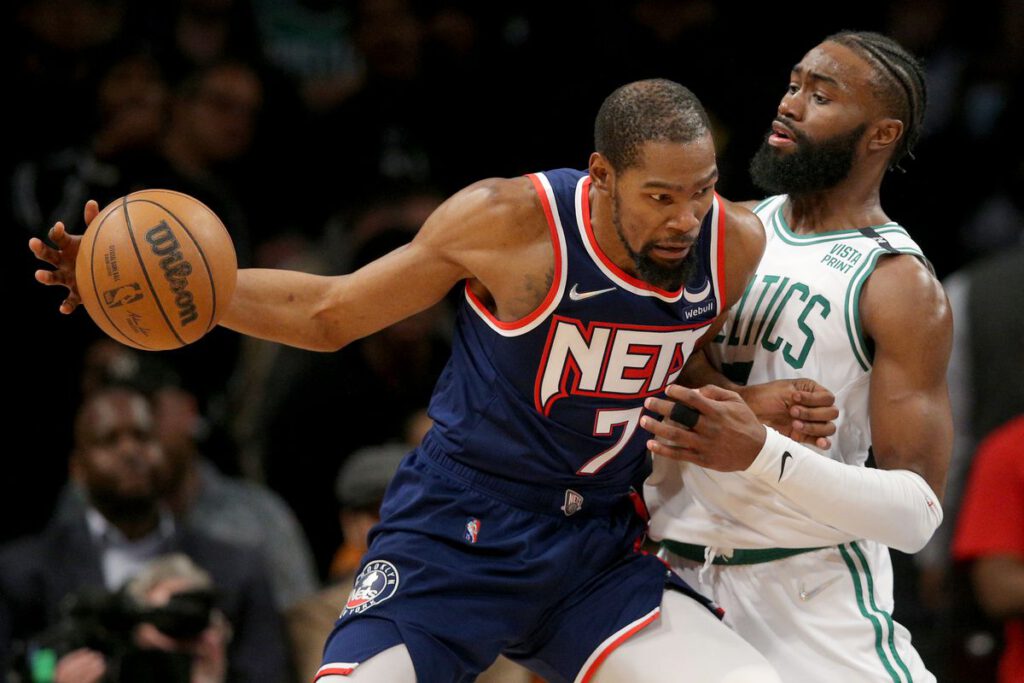 With rumors swirling what feels like daily about a potential Kevin Durant trade to Boston, our betting partners at BetOnline wanted to get a pulse of the nation on the negative sentiment toward KD.

They conducted a Twitter study that “combed through nearly 500,000 negative Kevin Durant tweets, and it seems clear that Massachusetts and the surrounding states that support the Celtics do not want Kevin Durant in Boston.”

BetOnline ran the study over a 25 day period, “using geotagged Twitter data to see which states had the highest number of negative posts written about Durant.”

Tweets with “Kevin Durant,” “KD” or “Durant” that contained negative keywords or phrases like “don’t want,” “horrible trade,” “crybaby,” “soft,” “keep Jaylen,” “too old” were used to obtain the data.

Here are the results: 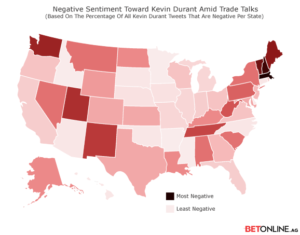 These are the top ten states with the most Durant hate:

Clearly, Celtics fans want to keep the core “as is” heading into 2022.

Boston is, however, the odds-on favorite to land Durant in a trade at -170 according to BetOnline. Here was my take on the matter, from June, when they were measly long shots at 28/1:

Oh wait – who’s that at the bottom? Oh! That right there is your Boston Celtics (+2800). According to Ross at LegionHoops, the Celtics and Nets have engaged in talks regarding a potential blockbuster for Durant. He also reported that Boston is one of four teams who Brooklyn has re-touched base with.

So what would it take? There’s no reason to believe that Brooklyn would accept anything less than Jaylen Brown and multiple first round picks. Even that would probably be too low. So would you do it Celtics fans?

Personally, I wouldn’t hate seeing them take the chance. That would give you two top five players in Durant and Tatum, and you would still have plenty around them in Brogdon, Robert Williams, and maybe even Marcus Smart if you could keep him around.

I don’t expect this to happen, though.

My thoughts are pretty much the same. Now that it’s been reported that Boston and Brooklyn have in fact engaged in trade talks centered around Brown, it feels like this thing might have some legs. Like I said just a few weeks ago: “On one hand, Boston was just two games away from winning the Finals last year. Jaylen Brown was your best player in the series – and is still only 24 years old. Plus, Marcus Smart is the reigning Defensive Player of the Year. How do you not run it back with those two guys?

But, at the same time, they were two games away from winning the Finals last year – and could add Kevin Durant alongside Jayson Tatum. This puts two top five NBA players next to each other on the court.”

Boston has the best package to offer for Durant, so they have the leverage. We’ll see if Brooklyn folds.