Celtics Frustrated with Kyrie Irving Talk, Ready for Fans to Move on 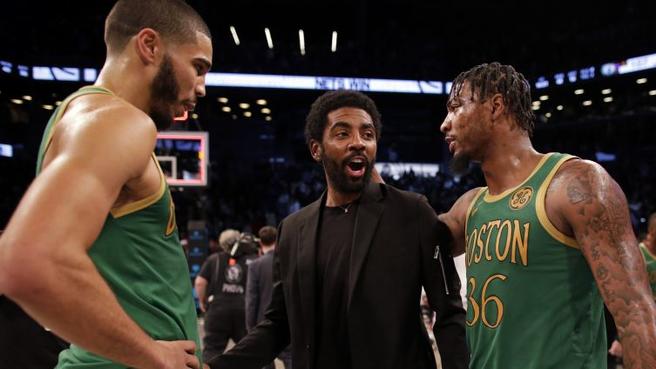 “We put it behind us in June,”

Brad Stevens told reporters Friday afternoon with the kind of tone that gave everyone the impression that he’s just about had it with Kyrie Irving related questions.

“Did they? Good,” Stevens replied when he was asked if he saw his players embrace the former Celtics point guard, following Friday’s 112-107 loss against the Nets.

Stevens is hoping it will finally put an end to the Irving/Boston saga. Irving’s Instagram post Wednesday night certainly added another wrinkle to the tale of a fallout between a star athlete and a passionate fanbase.

Still, a handful of Irving’s former teammates, including Stevens, continued to sing his praises whenever Irving’s name was brought up Friday afternoon.

“He had a right to go where he wanted to go,” Stevens said. “He’s a great player. We did that a long, long time ago. I realize it’s always going to be a story but it’s not a story to us.”

Jayson Tatum, Marcus Smart and Kemba Walker were all smiles when they circled around Irving moments after the final buzzer. Smart, who says he still considers Irving as family, addressed his frustration with the narrative surrounding Irving and his his time with the Celtics.

“That’s my brother, regardless of what he did,” Smart said. “He worked hard and quite frankly I’m really honestly tired of hearing about Kyrie.”

Irving, alongside Kevin Durant, both dressed in street clothes, watched their team keep its opponent in check for the most of 48 minutes in a game where they only trailed once throughout its five-point win. In was the kind of game where the Nets would typically turn to Irving in the second half to close out an elite team like the Celtics.

This time, Brooklyn looked at Spencer Dinwiddie, who caught fire after the break and scorched Boston for 19 second-half points.

He finished with a game-high 32 points, including 6-of-8 from behind the arc to go with his 11 assists. After Tatum and Walker both came up short in drawing a shooting foul at the rim on back-to-back controversial no-calls, the Nets capitalized by stringing together defensive stops that led to a two-possession game with only 20 seconds left.

Following the disappointing finish, Irving’s presence seemed to be the last thing Stevens, Smart and Tatum wanted to comment on but they didn’t shy away from the topic when they each were asked about the influence Irving had throughout his two years in Boston.

“I talk to him all the time but I haven’t seen him since the summer,” Tatum said. “It was good to see him.”

Smart is hoping Friday’s game will lead to closure. He’s not confident Celtics fans are quite ready to move on but did take the time to remind them that by continuing the Irving talk is something he considers a disservice to him and the rest of his team.

“Kyrie is no longer with the Boston Celtics,” Smart said. “And it’s a slap across everybody on this team that’s here now to keep hearing Kyrie’s name because every last one of these guys have put in the work and we continue to put in the work.

“We’re here, we’re still competing but yeah everybody, including the Boston fans, want to talk about Kyrie. Let’s talk about the Boston Celtics.”