The Celtics have played smaller and flashed some impressive pace, shooting and passing on offense in the preseason. Is it sustainable? 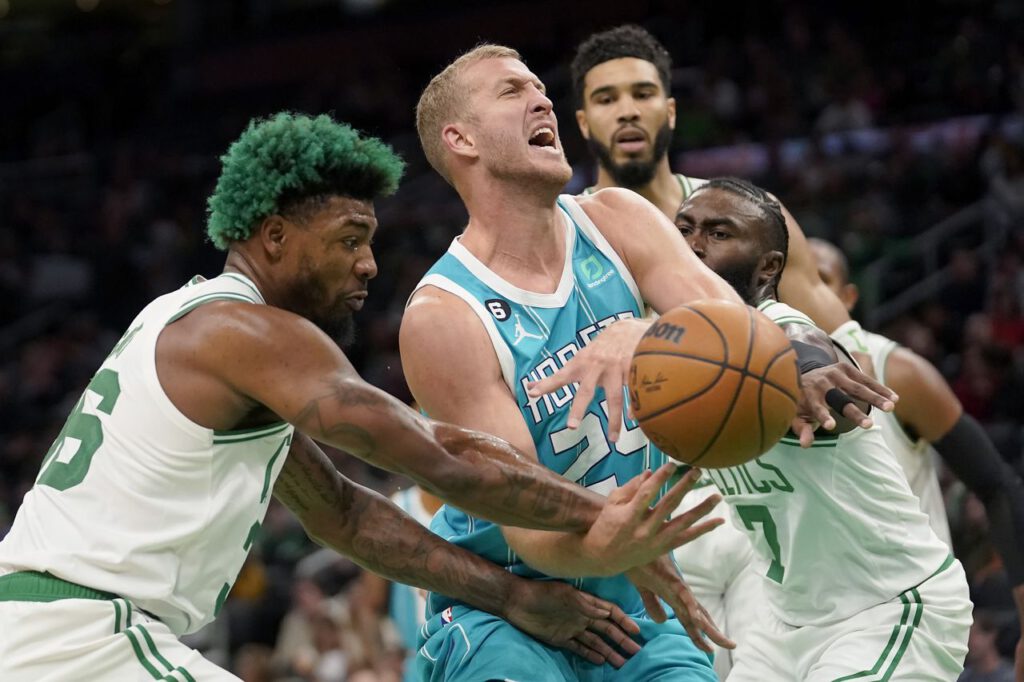 BOSTON — Joe Mazzulla predicted he would maintain the Celtics’ identity from last season to help his players acclimate to the team’s coaching change. It didn’t take long for him to lay his own imprint on Boston’s preseason game plan, sensing midway through Sunday’s opener that he wanted to try out an ultra-small lineup the Celtics hadn’t practiced.

Marcus Smart, Derrick White, Jayson Tatum, Sam Hauser and Malcolm Brogdon found themselves on the floor together, with Smart and White taking turns guarding Hornets center Mason Plumlee. White wasn’t expecting the move, Plumlee marched to the line for consecutive free throw trips, but the Celtics’ lineup ran back on offense to extend a 19-point lead to 24.

“That small lineup was kind of crazy,” White said. “That’s just a credit to this team, the depth we’ve had, we can do a lot of different things, and once everybody starts getting back we can go big as well. So there’s a lot of exciting things and a lot of fun rotations for the coaches to play with.”

That unit marked the extreme between the Celtics’ pair of home preseason games. The constant became White’s presence in the starting lineup in place of Robert Williams III, an absence alongside Luke Kornet’s that demanded some experimentation from Mazzulla. The results flowed immediately, a 134-point explosion against the short-handed Hornets and a 50% first-half shooting performance against a long Raptors defensive front on Wednesday where the Celtics’ offense played more flexible, quick and dynamic.

Boston dished 41 assists through its smaller, more versatile lineups while only occasionally mixing in bigger looks with Noah Vonleh. Mazzulla leaned further into the guard-heavy units early against Toronto before mixing in Grant Williams more in the second halves. The Celtics cut their turnovers by more than half after the Charlotte game, but rebounding remains an emphasis for their wings who became power forwards.

Put backs don’t hurt as badly when Boston hits threes the other way, now ranking second in the NBA averaging 49.5 three-point attempts. Their league-low 21.3 shots per night inside five feet leaves much to be desired from the other most efficient spot on the floor. The Celtics snuck a few extra looks in there with their own boards last year, which is harder to do while awaiting Rob’s return.

“We’ve just gotta rebound,” Brown told CLNS Media. “We made an emphasis on that tonight, JT came out and got 10 boards, but we’ve all got to chip in on that end, rebounding each and every night. Depending on the matchup, we’ve got to be aggressive on the boards. If we do that, we’ll be tough … keeping the floor spaced and hitting shots tonight, we missed a lot of good looks, but the floor is spaced. We took good shots, it was clean basketball, if we do that, rebound and take care of the ball, it’s going to be the same emphasis every night … we’ll be alright.”

The Celtics generated a league-high 36.0 assists per game through their first two games, Brown hit 17-of-25 to lead the NBA with 47 points so far with all that spacing and Malcolm Brogdon took pole position with 18 assists off the bench. A stagnant offense as recently as in the NBA Finals immediately played faster, throwing more outlet passes and allowing various players to facilitate offense. All they’re figuring out, Brogdon said on Sunday, is who will bring the ball up to start a given set.

Al Horford’s elbow actions highlighted the early minutes of the Charlotte game and his presence above the break allowed Tatum to work the ball through the post. White, playing in smaller lineups, gave the Celtics another ball handler and screener, while the size of Boston’s perimeter players maintains defensive posture.

“I’m still doing a lot of the similar things to the things we did last year,” White said. “Reading the defense, getting the right screening angles, whether you’re a guard or a big. During the playoffs, I felt like I was screening more than the bigs were.”

It’s a different dynamic on defense. The Celtics haven’t switched as much through training camp as they did all of last year. Playing Sam Hauser, who’s looking like a rotation lock at 9-for-13 from three, and big men who’ll need to play more drop coverages won’t allow for as aggressive schemes. Blake Griffin’s debut got held off until Saturday even though he had the chance to play physically as he catches up with the team’s playbook.

Finding a balance between the two sides of the ball might be best for Boston long-term. Traditional coverages could help manage Horford’s work load. Small ball, with Grant, Smart and Tatum defending the five, helps too.

“I liked the idea of it. I liked the skill, I liked the speed and I liked the basketball IQ that was out there with that (small) lineup,” Mazzulla said. “If there’s opportunity presented to get to something like that again I think we try it.”

The Raptors presented a greater physical challenge and didn’t allow for the ultra-small lineup, playing all their regulars who boast great length and offensive rebounding prowess. Tatum drove in traffic and managed double teams, shaking off an 0-for-7 start with a string of low-post baskets before halftime. Brogdon assisted him out of his early cold spell by feeding him an extra pass for a fast break slam when Brogdon probably could’ve taken it.

Brogdon and Hauser have meshed with the second unit and Grant appears as flexible as ever in a front court that needs depth, and flashing a more expansive perimeter scoring repertoire in the early games. While Ime Udoka’s rotations largely stood for the entirety of last season, Mazzulla noted his starting lineup could become one that depends on matchups. The stars, enhanced by some new additions, have played freely .

“It kind of feels like we’re leaving off from the second half of last season, just the way we’re moving the ball, playing with each other, it just feels natural,” Tatum said. “It’s fun playing that way.”