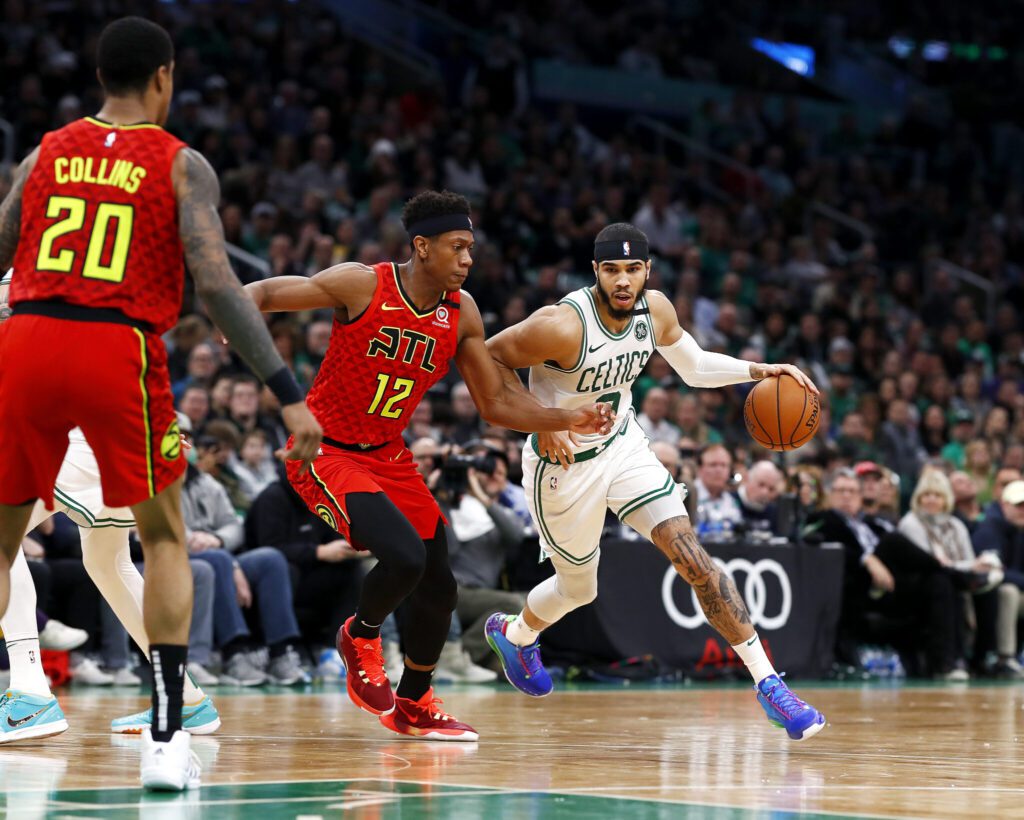 BOSTON, MASSACHUSETTS - FEBRUARY 07: Jayson Tatum #0 of the Boston Celtics drives to the basket during the fourth quarter of the game against the Atlanta Hawks at TD Garden on February 07, 2020 in Boston, Massachusetts. NOTE TO USER: User expressly acknowledges and agrees that, by downloading and or using this photograph, User is consenting to the terms and conditions of the Getty Images License Agreement. (Photo by Omar Rawlings/Getty Images)
Share
Facebook Twitter Email

Kemba Walker will sit as part of his knee management program. Daniel Theis is out again after spraining his right index finger in Washington, with Marcus Smart (calf) and Romeo Langford (wrist) still down.

According to the online sports book Betonline.ag, the Celtics are 2.0 point favorites

The Hawks have lost 7-of-8 as injuries mount and they continue their years-long search of defensive inconsistency. Trae Young is reminiscent of prime Isaiah Thomas, giving up as much as he scores, with a net +1 rating per 100 possessions.

Young has taken 17.6 shots per game and only converted 41.7% from the field and 36.4% from three. Kevin Huerter, Cam Reddish and John Collins are similarly dynamic, but not efficient or overly impactful defensively. The Hawks rank 23rd in effective field goal percentage at 51.8%.

Clint Capela, however, has aided their defense by turning away shots at the rim. Opponents shoot 45.6% from the field (8th) and 34.1% from three (2nd). They do compete in the worst division in basketball and struggle on the defensive boards.

In turn, Atlanta is adept at offensive rebounding (24.7%, 6th) and shoots a free throw on 29.9% of their field goal attempts (2nd). They’ll inflict over 20 fouls per game on their opponents. This team is a net neutral, with a 113 offensive and defensive rating.

No Kemba Walker hurts against a weak defense and there’s no certain player to start in his spot. Payton Pritchard looked better off the bench than he did with the starters in Friday’s spot start where he struggled against Detroit.

Jeff Teague has been bad all season for the Celtics and could simply stagger minutes into the bench. That seems less concerted than giving someone like Tremont Waters a chance against Young like he got against De’Aaron Fox.

This is another game where Jaylen Brown and Jayson Tatum should get what they want against weaker wing defenders. Capela is a different kind of interior defender than Nikola Jokic though, so Boston will need to continue to move and pass to create quality looks.

The worry here is Atlanta can score into the 110s and above on certain nights rolling out of bed. The Celtics have been stuck closer to 100 as their offense dips into the bottom half of the league. Boston’s defense has raised its level to top-6 level in points per game (109), with a +1.3 net rating. The margin for error is slim, particularly without Walker, to keep up offensively.