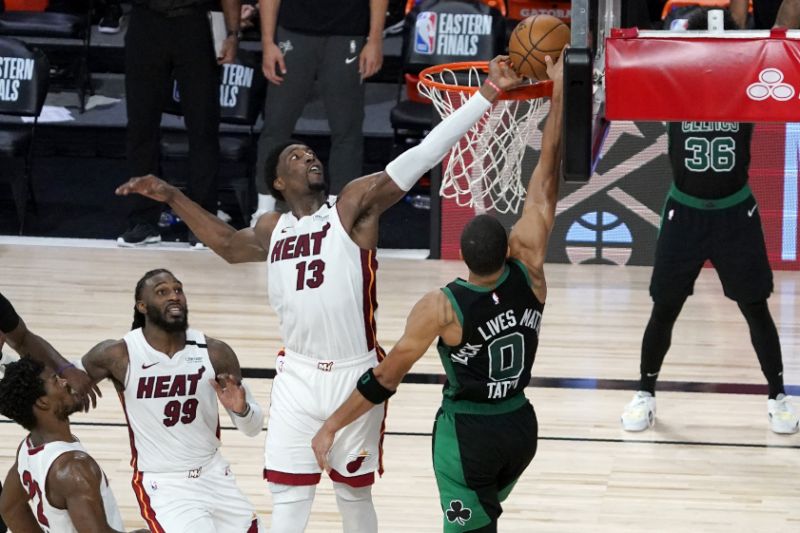 The Boston Celtics and Miami Heat continue the Eastern Conference Finals with Game 2 at 7 p.m. EST. The Celtics began the series as slight favorites and rode their first third quarter win since the Philadelphia series toward what looked like inevitable victory. Then Goran Dragic led a 14-point comeback charge capped by Tyler Herro and Jimmy Butler.

According to the sports book Betonline.ag, the Celtics expanded to 2.5 point favorites over the Heat in Game 2. The Heat (-155), however, assumed favorite position to win the series with a 1-0 lead over the Celtics (+135). Vegas likely responded to the Celtics announcing Gordon Hayward’s upgrade from out to doubtful on Wednesday afternoon.

Brad Stevens didn’t speak earlier in the afternoon about that possible progression. He said before the series that Hayward would return at some point, staying quiet about a timeline or possible departure date for his son’s birth. Hayward practiced on Monday separately from the team after their walkthrough.
Hayward returned to the bubble 10 days ago and cleared quarantine several days later. Since, he’s been present at games shooting. He averaged 22.0 points, 8.0 rebounds and 2.0 assists per game in two meetings against Miami, shooting 55.6%.
FULL DAILY NBA ODDS HERE

THE SKINNY
Let’s call it what it is. The Celtics melted down late in Game 1 and outside an ill-advised rotation in the second quarter that featured three bench players, Boston largely controlled the game otherwise. Brad Stevens and Jaylen Brown both conceded that the Celtics’ offense changed and became stagnant in the later stages of the game. They worked roughly six solid possessions out of the final 16 after the six minute mark of the fourth.
Perhaps too much attention went to Jayson Tatum’s decisive plays in the fourth and overtime. The second look was a no-brainer drive that Bam Adebayo made a legendary defensive play on. The shot to end regulation wasn’t great considering the Cs had 22 seconds to work with, but had a chance. Tatum’s air ball three in isolation ahead 103-100 and step-back miss that turned into easy Adebayo points the other way in overtime were more emblematic moments of Boston’s late game woes.
The Celtics need to simply run their offense. While Hayward’s return remains doubtful for Game 2 and his impact unproven beyond that, he could ultimately blend both stability and diversity into Boston’s offense late in games. Marcus Smart, a proven facilitator, could too. Tatum’s isolation scoring is a weapon, but should not be the primary offensive choice for the Celtics. It’s not all game. He runs pick-and-rolls, cuts and shoots off the ball throughout. That shouldn’t change when the clock’s ticking down.

The Celtics likely tinker with rotations tonight. Expect more Robert Williams III for his passing within the zone and to spread Daniel Theis fouls. Theis fouled out after logging 35 minutes and could in every game given his top-10 foul rate and Miami’s propensity for drawing them. Thank Jimmy Butler, who tagged Theis with his first three.

The question becomes if the Celtics add Enes Kanter to the mix. Kanter’s defense became an easy target of Goran Dragic for a flurry of mid-range makes on Kanter switches in their August meeting. He also sets powerful screens that could help further free a struggling Kemba Walker and counters Bam Adebayo on the boards. Kanter did not play in Game 1 and hasn’t seen action since the Philadelphia series. Watch for him in Game 2 with Brad Stevens tentative to use Williams III against Kelly Olynyk. Grant Williams posted a team-low -6 in the opener.

As for Kemba Walker, 14.7% from three in his past five games, the Celtics could try to loosen him up for more than his 1.7 catch-and-shoot threes per game this postseason. That part of his game never opened up in Boston during year one, but needing an escape valve the team should try to utilize Tatum’s expanded passing game to free him. Walker can’t get favorable switches right now due to Adebayo and the traps have come before he can unload the ball. His late game production remains pivotal and the Celtics need to get creative, even if it’s more rest time, to keep him active and engaged throughout.

The Celtics will win substantial minutes of each game in this series. It’s sustaining Theis, Walker and leads that’ll determine if they can win it.