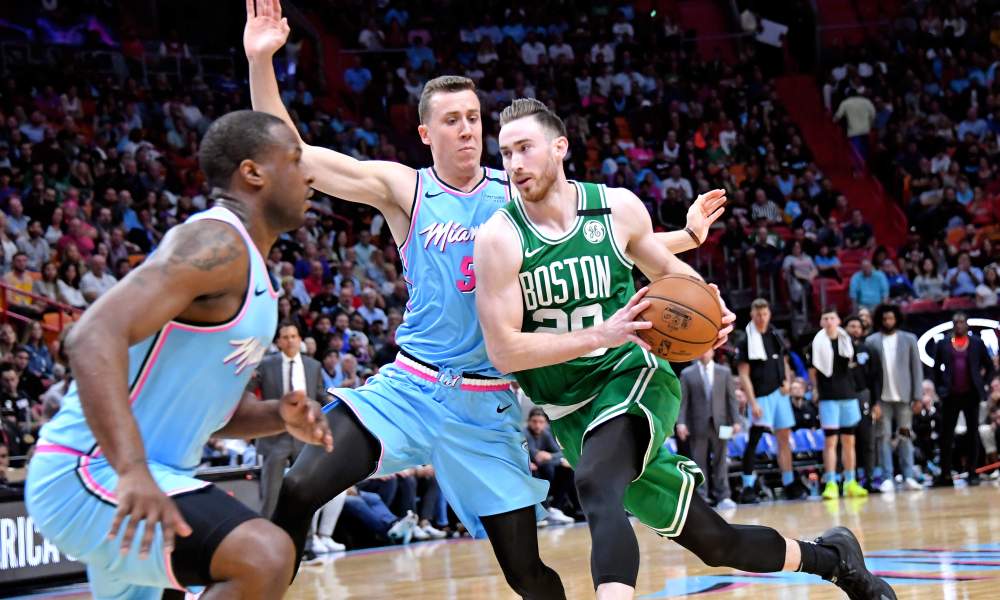 The Boston Celtics and Miami Heat continue the Eastern Conference Finals at 8:30 p.m. EST. Gordon Hayward is expected to play, barring a setback, for the first time in 33 days since he suffered a right ankle sprain against the 76ers.

According to the sports book Betonline.ag, the Celtics enter 3 point favorites over the Heat in Game 3, the largest spread in a series where Boston was favored in each game. The Celtics are +245 to come back and win the series, while the Heat are -290 to close it out.

Vegas appeared correct when the Celtics took double digit leads in each of the first two games. A fourth and third quarter meltdown respectively allowed the Heat to explode back in each game and take commanding leads into crunch time. Hayward drastically changes a Celtics rotation that played Brad Wanamaker 24 minutes though. Brad Stevens said the Celtics wanted to get Walker more rest for crunch time in Game 2.
FULL DAILY NBA ODDS HERE

Watch all the zone breakdowns you want. Erik Spoelstra and Brad Stevens, two of the best coaches in the NBA, both concluded that Game 2 was decided by factors outside of scheme. “We just got to be better,” Stevens said, deflecting any concerns about their offense and defense.

That played out in the post game locker room, which exploded into a fight reportedly centered around Marcus Smart and Jaylen Brown. Players tried directing each other through the zone in the second half unsuccessfully, with those poor positions leading to 20 back-breaking turnovers. The Heat simply produced more possessions than the Celtics.

The zone is the zone. As much as it bothered the Celtics, it still only held Boston to 0.96 points per possession, hardly a starving mark. Allowing offensive rebounds, transition break outs and uncontested pick-and-roll slams from Bam Adebayo proved far more decisive. That potentially limits the impact of Gordon Hayward’s return. Integrating a player after four weeks, no matter his effectiveness, won’t be easy if the team is disconnected.

The Celtics should benefit from Hayward’s return against the zone since he’s an adept pull-up shooter, can catch in open space and finish on the move and on cuts. He’ll find open space and make good decisions about secondary passes and finding cutting big men when necessary. He’ll also be an effective defensive weapon if healthy, allowing the Celtics to go with their five best players and no centers.

That may effectively end Miami’s zone defense, since five shooters on the floor would leave Bam Adebayo unable to play the middle. It’s worth holding out on that personnel change alone completely changing this series, though Miami has had an adjustment for Boston’s, including their extra dose of pick-and-roll against Enes Kanter. We need to see how healthy Hayward looks too.

Even if they’re 70% of his usual productivity, Hayward minutes mean fewer for Boston’s other unsung bench cast. That alone is a win for Walker, who played better in Game 2 with more rest and the rest of the Celtics who’ve consistently logged 40+ since Game 5 against Toronto. The Celtics need this one tonight, but I’d take Miami’s points because they’ve handled every counter punch they’ve seen this postseason.