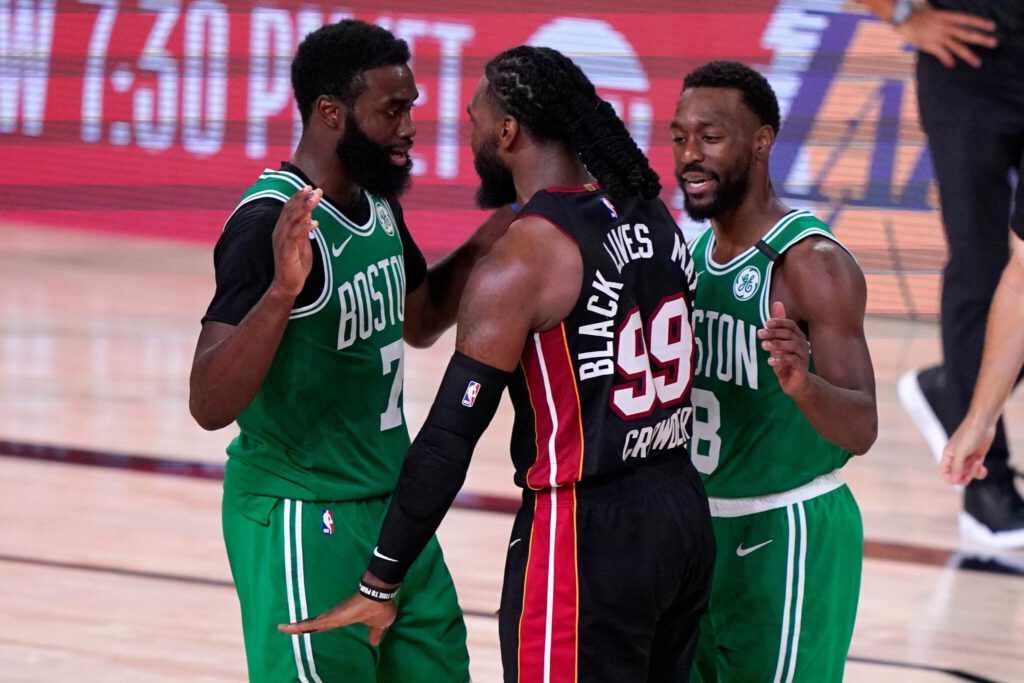 The Boston Celtics and Miami Heat continue the Eastern Conference Finals at 8:30 p.m. EST after a four-day layoff. Gordon Hayward remains active for Boston off the bench, responding well to his 31 minutes in a 117-106 win over Miami on Saturday. The Heat enter healthy after Andre Iguodala struggled with back spasms in Game 3.

According to the sports book Betonline.ag, the Celtics remain 3.5 point favorites over the Heat in Game 4, the largest spread in a series where Boston was favored in each game. The Celtics are +110 to come back and win the series, while the Heat are -130 to close it out, a drastic reduction from those odds when Boston trailed 2-0 late last week.

Game 3 marked the first time in 70 games that the Heat never led in a game. Boston nearly squandered a 19-point lead with 10 minutes to go by allowing a 26-12 Miami run. The Celtics held a 109-104 lead with 55 seconds remaining, before Marcus Smart closed the game with seven straight free throw makes.
FULL DAILY NBA ODDS HERE

The Celtics outscored the Heat 60-36 in the paint with Jaylen Brown shooting 10-for-15 inside the arc, contributing 20 of those points. His driving offensively cracked Miami’s zone, while involving him in the pick-and-roll defense helped produce eight turnovers between Bam Adebayo and Goran Dragic. Boston outscored Miami by 29 points with Dragic on the floor, sweeping him with Smart and Tatum defensively.

Brad Stevens also slipped Enes Kanter on Andre Iguodala, with Kemba Walker shadowing the shooting-only Jae Crowder. Crowder acknowledged adjustments coming in those areas for the Heat, though when Miami ran a pick-and-roll for Iguodala it ended in a turnover on the Heat’s worst night for ball control since the Milwaukee series.

Boston also unleashed its “Best Five” lineup in the win, for a +86 net rating in seven minutes. They went on a 9-2 run before half, allowing 0 FG, 0 offensive rebounds and forcing two Miami turnovers in the final two minutes before halftime.

The Celtics pulled off a perfect two-way storm, completed by holding Miami to 12-for-44 from three. Miami is now shooting 34.1% from outside in the series, a notch below their 38% mark throughout the season prior.

The Celtics will live with Miami trying to beat them with Crowder attacking Walker on the drive and Iguodala pick-and-rolls if that’s Miami’s adjustment. The Heat seem unlikely to relinquish their liberal use of zone defense, despite Kanter’s picks and Brown’s dribble penetration exposing holes in it during Game 3. They did get away from it as they mounted their fourth quarter comeback though, speaking to Miami’s confidence in the zone through the game’s most consequential moments.

Wing minutes became an issue too, with Duncan Robinson rendered unplayable through foul trouble in Games 1 and 3. Boston’s wings lit up when he took the court, particularly Brown, and now that he’s not drawing Brown as often on the perimeter, Robinson could factor less into lineups. Adebayo requires no adjustment, scoring 27 points with 16 rebounds, three steals and two blocks in the loss. The Celtics have to live with him destroying them inside.

Miami thrived by exposing Boston’s bench minutes, but Gordon Hayward’s return allowed Stevens to effectively eliminate Brad Wanamaker and Semi Ojeleye from the rotation. Hayward allowed the Celtics to stagger ball-handling minutes, gave them a boost of wing shooting and defense in a night where he was conditioned enough to play one good half.

Miami faces matchup issues for the rest of the series and with Jimmy Butler sparingly present throughout the first three games, they’ve built early deficits in each. The Celtics’ wing defense is bothering them, while the Five Best lineup delivered devastating results. Crowder and Kelly Olynyk went cold in Game 3, further sending chilling signs that this series is shifting away from them.