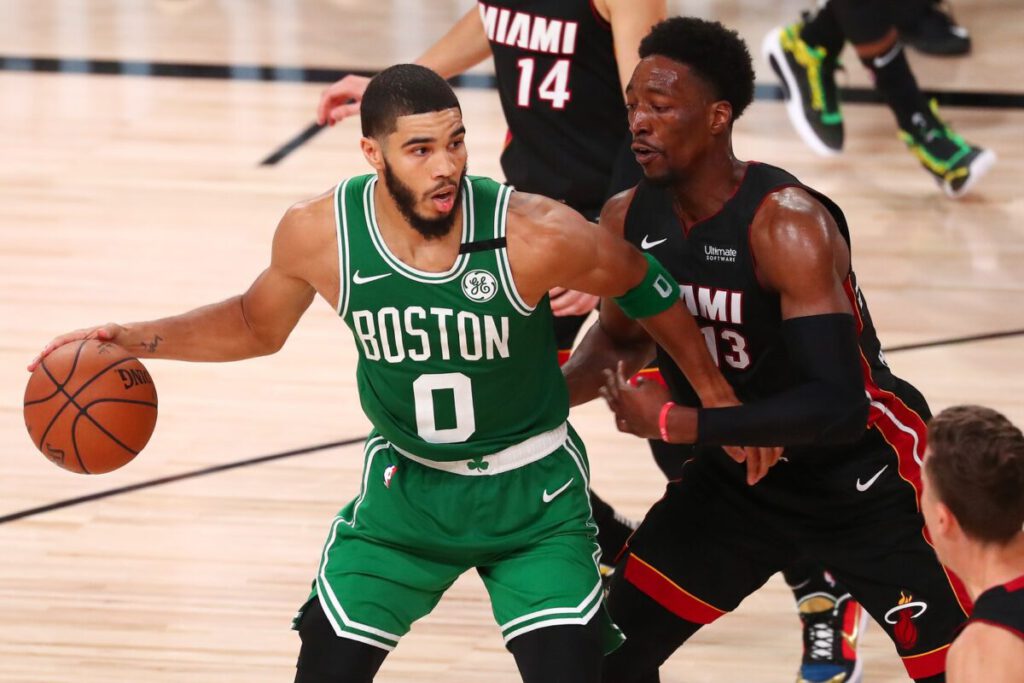 The Boston Celtics and Miami Heat play what could be the final game of the Eastern Conference Finals at 8:30 p.m. EST. The Heat won their most sluggish game of the series behind 37 Tyler Herro points (second in NBA Playoff history for rookies) after initially blowing a 12-point lead in the second half. They’re now one win from their first NBA Finals trip since LeBron James returned to Cleveland in 2014.

According to the sports book Betonline.ag, the Celtics remain 3.5 point favorites over the Heat in Game 5. They’ve been favorites in each game, despite losing three of four. The Celtics are +335 to come back and win the series, while the Heat are -415 to close it out. Only 13 teams in NBA history overcame 3-1 deficits, but in the neutral-court NBA bubble the Denver Nuggets did it in both the first and second round.

Trending
Celtics Get Seventh Straight Win as Tatum Drops 51 Points
Jayson Tatum scored 0 points for the Celtics in the first half on Wednesday before erupting for a 28 point second half. The series is tied 441-441 through four games, outlining how Boston dominated most of the first three games of the series, before collapsing dramatically late in games.
FULL DAILY NBA ODDS HERE

The Heat entered Game 4 intending to target Kemba Walker and scored on him on the first possession, finishing 7-for-13 against him as the primary Celtics defender. Herro benefited most, shooting 4-for-7 against Walker for 9 points during his historic performance. Miami scored 25 points on possessions where Walker guarded Herro.

Walker’s defensive performance led to his pulling in crunch time in favor of Daniel Theis shortly after the Celtics went small with their “Best Five” lineup. Boston pulled within five with him off the floor, then three shortly after his reinsertion, before the Celtics allowed the Heat to score on three straight possessions between two of the Celtics’ turnovers to go down by nine before losing by three.

In a series where Boston is shooting better from the field, three point line and on free throws, while also winning the overall rebound battle, they’ve devastated themselves with 64 turnovers to Miami’s 45. Marcus Smart (13.5% turnover ratio), Jayson Tatum (12.9%) and Kemba Walker (11.7%) have all turned it over as Boston’s regular ball handlers, in turn posting the worst defensive ratings in the Celtics’ rotation as they’ve allowed 77 points off turnovers, while only scoring 49 as a team in the series.

It’s hard to imagine trends baked into the series through four games changing drastically in Game 5. The Celtics feature enough firepower to build a lead throughout the regular minutes of the game, the Heat enough shooting to erase any deficit, though outside of Tyler Herro they’ve largely gone cold outside. Miami shot 5-for-27 outside of Herro’s 5-for-10 mark, 27% as a team overall.

Bam Adebayo continues to be the force the Celtics can’t reckon with. He’s averaging 21.5 points, 11 rebounds, 4.5 assists, 2.0 steals and 1.3 blocks per game while decimating Boston’s interior, with Daniel Theis averaging 3.8 fouls in the four games.

The Celtics face too many matchup issues. They’ve smothered Jimmy Butler and Goran Dragic as shooters only to allow Adebayo and Herro to break loose off the ball as Miami’s leading scorers. Recent struggles from Jae Crowder and Kelly Olynyk allowed Andre Iguodala to emerge as a productive five in the zone off the bench. Meanwhile, Boston’s tried three different backup centers and small ball sporadically. Worse, Gordon Hayward’s conditioning doesn’t seem fit to play a full game at peak effectiveness.