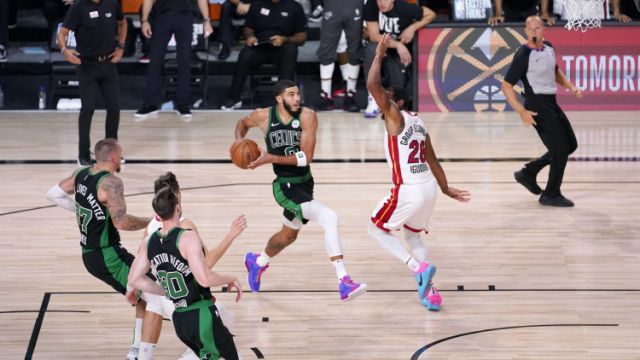 The Boston Celtics and Miami Heat play Game 6 of the Eastern Conference Finals at 7:30 p.m. EST, a game that’ll either set up Game 7 on Wednesday, or Game 1 of the NBA Finals.

According to the sports book Betonline.ag, Vegas likes a Game 7, slating the Celtics as 3 point favorites for the sixth straight game in this series. The Celtics moved to +170 to win the series, while the Heat are -195 to meet the Lakers in The Finals. The Lakers (-400) reached the championship with a win over the Nuggets yesterday, leaving the Heat (+500) and Celtics (+800) as distant underdogs to win the championship.

Jaylen Brown hit back-to-back threes early in the fourth quarter as the Heat rallied within seven, eventually combining for 59 points with Jayson Tatum, to beat the Heat in Game 5. The Celtics started 1-for-10 from the field, relying almost entirely on threes, before taking on a more concerted attack for the game’s remainder and scoring 56 points in the paint.
FULL DAILY NBA ODDS HERE

Brad Stevens said during Game 5 that it was the first dose of Celtics basketball he’d seen in several games. Stars like Kemba Walker and Jayson Tatum played off each other smoothly, while the team swarmed defensively, at times suffocating the Heat like the opening stretch of the third quarter when Miami shot 0-for-8.

The Heat shot 19.4% from three in the loss after Tyler Herro buoyed a 28% swoon in the Game 4 win. The Celtics stand among the best three-point defenses through Stevens’ tenure, suffocating Goran Dragic’s ability to pull up. Part of Miami’s struggles, though, stem from Jae Crowder’s 6-for-32 (18.2%) streak from outside over the last four games. Erik Spoelstra said his team can explode at any time from outside.

That’ll need to be true for Jimmy Butler, a sound facilitator so far helping Herro score 37 points in Game 4. Herro, too, went cold scoring less than 10 points before a flurry of garbage time makes led him to 14. Butler, averaging 18.4 points per game on 43.5% shooting and 22% from three. Per usual, a significant percentage of his offense comes from the free throw line (7.0 FT attempts per game at 85.7%), but he’s been reluctant to take over the offense. Miami needs it with most of its role players struggling in the half court.

Game 5 boded well for the Celtics, garnering great games from all of its rotation players, including Daniel Theis. Bam Adebayo took credit for the loss, with his 11-point, -18 performance calling into question whether his left arm is more injured after Game 4 than he and the Heat admitted. He deflected those questions again after Game 5.

Theis scored 15 points and grabbed 13 rebounds in his most free performance of the series. He screened, scored on the short roll and keyed a dominant Celtics rebounding effort on both ends. The Celtics cleaned up their turnovers, further limiting Miami’s opportunity to score points outside of the half court.

This series came down to both team’s top sevens in Game 5. The Celtics received quality minutes from Enes Kanter in the first half while Tatum easily discarded Andre Iguodala in his stint before halftime. The Celtics’ offensive firepower is becoming more apparent when its individual pieces play off each other. Miami, playing a shorter rotation, faced foul trouble and lost Goran Dragic to his sixth personal midway through the fourth.

Miami seems to be facing more question right now from its rotation to Adebayo to defending Boston’s stars. Despite the 3-1 deficit forcing perfection on the Celtics through the rest of this series, it also pressured the Celtics to find the best version of themselves. Gear up for a Game 7 on Wednesday.