Boston's 24-year-old star has been sensational through the first month of the season. 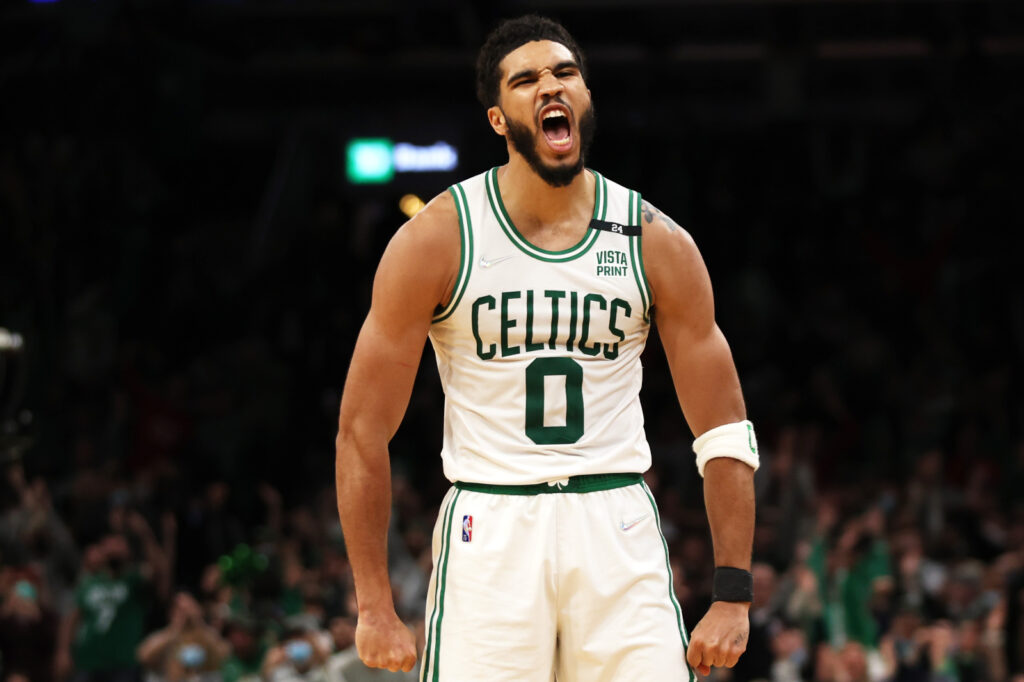 BOSTON, MASSACHUSETTS - MARCH 01: Jayson Tatum #0 of the Boston Celtics celebrates after Grant Williams #12 scored against the Atlanta Hawks at TD Garden on March 01, 2022 in Boston, Massachusetts. The Celtics defeat the Hawks 107-98. NOTE TO USER: User expressly acknowledges and agrees that, by downloading and or using this photograph, User is consenting to the terms and conditions of the Getty Images License Agreement. (Photo by Maddie Meyer/Getty Images)
Share
Facebook Twitter Email

The Boston Celtics have continued right where they left off following their NBA Finals appearance last season, going 11-3 through their first 14 games of the 2022 season and leading the charge with the league’s best record.

They’re doing it behind the amazing performance of superstar Jayson Tatum, who is now the favorite to win the NBA MVP award according to our partners at BetOnline.ag:

Originally a longshot/shot in the dark bet at +1200, prior to the season I outlined Four Reasons Why Tatum will take home the award, mainly given that I had bet it the day before:

At the ripe age of 24, Tatum is right in the MVP-winning sweet spot. Sure, there’s been outliers every so often (like Derrick Rose in 2010), but every winner since then has been between the ages of 24 and 28.

Betting is all about trends, and this is a trend I’m willing to hop on. Want another one? The last two MVP winners have gone back-to-back (Giannis ’18 & ’19, Jokic ’20 & ’21). If Tatum wins it this year, he could set himself up as a two-time MVP instantly.

3. His rebounds and assists continue to go up

Believe it or not, the MVP award is not as simple as being the highest scoring player in a season. Although it’s not really a “defensive” award, the voters take other statistics like rebounding and assists into account.

This is where Tatum can shine this year. His rebound and assist numbers have increased season-by-season over the first six years of his career. In bold, you can see Tatum’s year-by-year improvement in both categories:

With all due respect to Jaylen Brown and Marcus Smart, Malcolm Brogdon is the best playmaker Tatum has ever played with during his six year NBA career.

During the Celtics final two preseason games, Brogdon had 18 assists.

Players like Payton Pritchard, Grant Williams, and Sam Hauser are all expected to take a leap this year as well. Their improvement, specifically from behind the three point line, will allow Tatum plenty of opportunities to prove his worth.

Here’s where everything comes together. Jayson Tatum is a star in this league. He’s a 3x NBA All-Star, was First-Team All-NBA last season, and is undeniably the Celtics best player.

He also plays on a top three NBA team. The only teams I’d take ahead of Boston right now are Golden State and Milwaukee. Tatum is going to shine in 2022-2023 season, and he’s going to be able to do it on the biggest stage with the brightest lights.

Through the Celtics’ first 14 games, the only iffy one of the above reasons is the rebound and assist numbers. He’s currently averaging 7.4 rebounds and 3.9 assists per game – both of which are below his career average.

However, his points per game have skyrocketed to 31.9 through the first month, and he seems to be doing so with ease.

I don’t see this team slowing down anytime soon. The cast around Tatum is magnificent, Joe Mazzulla has seamlessly filled in for Ime Udoka (besides a slightly worse defense), and they still have yet to get center Rob Williams back from his knee injury.