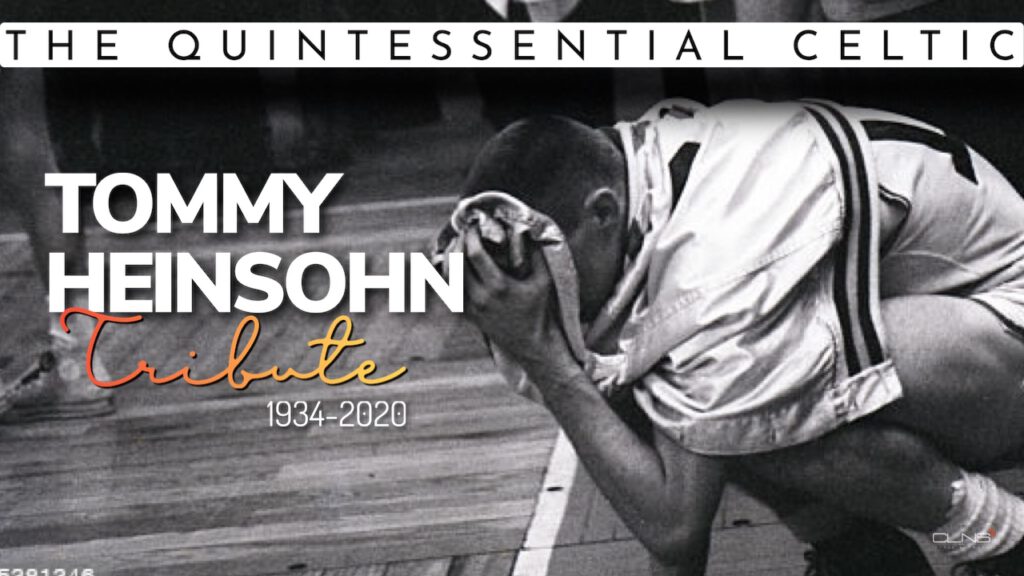 In a franchise loaded with charismatic and powerful personalities, Thomas William Heinsohn was considered by many the face, voice and personality of the Celtics over the course of six decades and two separate inductions into the Basketball Hall of Fame.

Heinsohn died on Tuesday after battling medical issues throughout 2020.

Born August 26, 1934 in Jersey City, New Jersey, Heinsohn produced a college and professional basketball resume unmatched in New England sports history before becoming an iconic broadcasting fixture and carving out a place in the pantheon of Celtics legends that is unrivaled.

Heinsohn became the only person to have the distinction of being involved in an official team capacity in each of the Celtics’ first 17 championships, as well as each of their 21 NBA Finals appearances.

Heinsohn’s play on the court earned him a place in the Basketball Hall of Fame in Springfield, Mass. His work on the sideline earned him a second spot in the basketball hall and produced a pair of NBA titles.

And his work as a color commentator and occasional critic of officials on the Celtics’ television broadcasts earned him a lasting place in the hearts of Celtics fans everywhere.  His “Tommy Points” given to exceptional plays perfectly captured and honored the hustle, heart and determination of those in Celtic green he embraced as a player and coach. The “Tommy Points” led to the “Tommy Award”, given to the player who stood out the most in a particular game.

Heinsohn was a standout at St. Michael’s High School in nearby Union City. He accepted a scholarship to Holy Cross and became the school’s all-time leading scorer with 1,789 points, an average of 22.1 points per game. During his senior year, Heinsohn scored a school-record 51 points in a game against Boston College on March 1, 1956.

Celtics patriarch Red Auerbach saw the potential for greatness in the 6-foot-7 forward and selected him in the territorial draft. The rest was Celtics and NBA history.

The association with the Celtics carried over a span of six decades as a player, coach and broadcaster. He played for the Celtics from 1956 to 1965, and also coached the team from 1969 to 1978. He earned Hall of Fame status for his success as a player and coach while helping to form the NBA players union.

In 1956, Heinsohn was chosen as the Boston Celtics ‘regional’, or ‘territorial’, draft pick. In his first season, Heinsohn played in an NBA All-Star Game, was named the NBA Rookie of the Year over teammate Bill Russell and won his first championship ring. He was part of a Celtics squad that won eight NBA titles in nine years, including seven in a row between 1959 and 1965. In NBA history, only teammates Russell and Sam Jones won more championship rings during their playing careers. During his own playing career, Heinsohn was named to six All-Star teams. On the day his teammate and fellow Holy Cross Crusader Bob Cousy retired, Heinsohn scored his 10,000th career point. His number 15 was retired by the Celtics in 1965.

Off the court, Heinsohn played an important leadership role in the NBA Players Association. He was the association’s second president (following founding president Bob Cousy) and was instrumental in the league’s acceptance of free agency following a showdown at the All-Star game in 1964, in which the All-Star players, led by Heinsohn, threatened to strike.

Heinsohn became the Celtics’ head coach beginning in the 1969–70 season. He led the team to a league best 68–14 record during the 1972–73 season and was named Coach of the Year, although Boston was upset in the playoffs. The next season Heinsohn and the Celtics won the championship, and they claimed another title in 1976. He accumulated a career coaching record of 427–263.

Heinsohn achieved a rare distinction on Feb. 14, 2015 when it was announced he would be inducted into the Basketball Hall of Fame for a second time as a coach. He is one of five members of the class of 2015 who were directly elected and is just one of four people to be inducted as both a player and coach.

Heinsohn’s broadcasting career began in 1966, when Auerbach asked him if he’d be interested in calling play-by-play for WKBG’s Celtics broadcasts. He spent three seasons in this role before becoming coach in 1969. From 1990 to 1999, Heinsohn was the Celtics’ road play-by-play man on WFXT, WSBK and WABU.

In 1981, Heinsohn joined Mike Gorman as color commentator in the Celtics’ television broadcasts. They became one of the longest-tenured tandems in sports broadcasting history. For a time in the 1980s, Heinsohn served the same capacity during CBS’s playoff coverage of the NBA (with Dick Stockton), calling four Finals from 1984 to 1987, three of which involved the Celtics against the Los Angeles Lakers. Heinsohn also teamed with Brent Musburger and James Brown during his time with CBS.

Heinsohn suffered an emotional loss on Nov. 24, 2008, just months after the Celtics won their 17th NBA title when his wife, Helen, passed away at the age of 68, following a lengthy battle with cancer.

In his last few years, Heinsohn has worked fewer games on the road while former player and analyst Brian Scalabrine filled in. He started to take on this role during the 2012–13 NBA season, and during the 2014–2015 NBA season became full-time on road games.