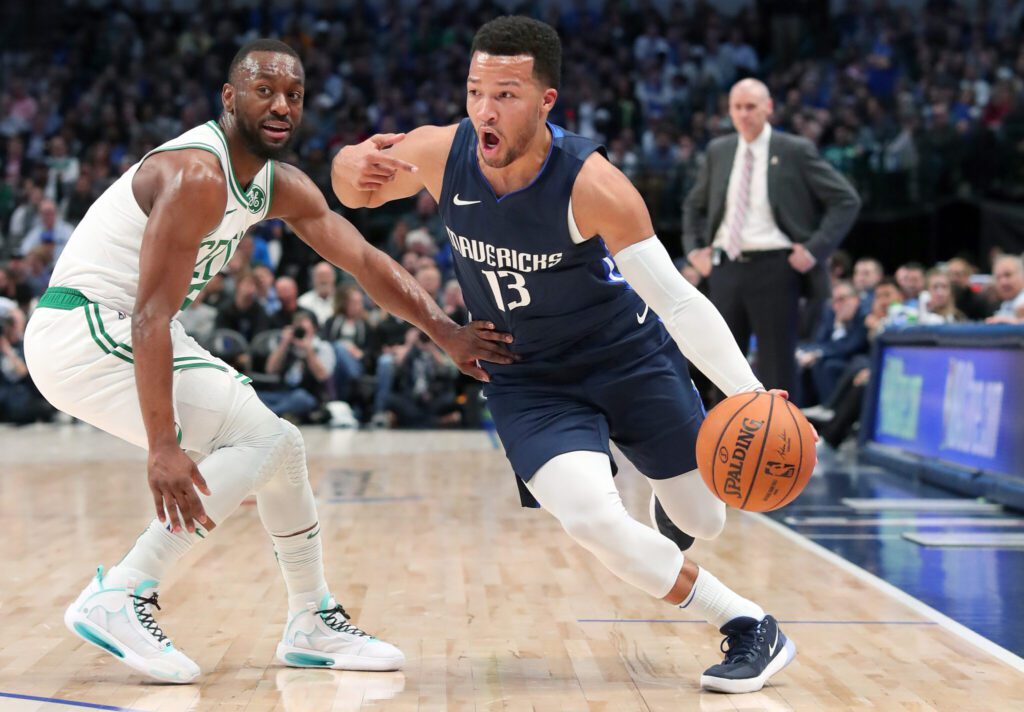 DALLAS, TEXAS - DECEMBER 18: Jalen Brunson #13 of the Dallas Mavericks drives to the basket against Kemba Walker #8 of the Boston Celtics in the first half at American Airlines Center on December 18, 2019 in Dallas, Texas. NOTE TO USER: User expressly acknowledges and agrees that, by downloading and or using this photograph, User is consenting to the terms and conditions of the Getty Images License Agreement. (Photo by Tom Pennington/Getty Images)
Share
Facebook Twitter Email

Marcus Smart (calf) and Romeo Langford (wrist) remain out for Boston. Kristaps Porzingis (back) and Maxi Kleber (ankle) are out for the Mavericks.

The Mavericks returned from a week off due to the deep freeze in Texas winners over the Memphis Grizzlies, and will play tonight on the back half of a back-to-back without Porzingis and Kleber, who was injured on Monday. Their depth bigs Dwight Powell and Willie Cauley-Stein struggled to keep Jonas Valanciunas off the offensive glass.

Dallas is unlikely to pad that weakness with 7’4″ Boban Marjanovic, as they didn’t play him yesterday, instead turning up the pace and creating transition opportunities in a fast-paced win over Memphis. Tim Hardaway shot 7-of-11 from three in rhythm and Josh Richardson added 3-of-7. Otherwise, they only shot 43% from the field and turned the ball over 16 times uncharacteristically.

Luka Doncic is a penetration and passing force (47 AST%) that generates ample quality three-point looks his teammates only sparingly convert. The Mavs started 8-13 before responding 6-2 over their last eight. Doncic shot 2-of-4 against Jaylen Brown, 3-of-4 on Jayson Tatum and 1-of-5 with Marcus Smart covering him last season — 1.11 points per possession in a loss.

The Mavericks narrowly win the minutes Doncic plays by 0.9 points per 100 possessions and lose his time off by 6.7. Hardaway and Richardson are net negatives, and Porzingis’ absence takes away from their scoring. Individually, Doncic has improved defensively in 2021. The team as a whole has sunk on that end.

Only those three and Jalen Brunson could score for the Mavs on Monday, and their offensive efficiency ranks below the Pelicans’. New Orlean’s offensive pressure sparked the 24-point turnaround on Sunday. Defensive pressure and adjustments helped, but Tatum still generated enough offense to force overtime. Dorian Finney-Smith (0-for-3) found some success guarding Tatum as Dallas” other wings struggled last season.

Boston continues to avoid falling below .500 and catching Dallas on a back-to-back should help that trend continue. It won’t be easy against one of the best players in the league though, so expect another close game.