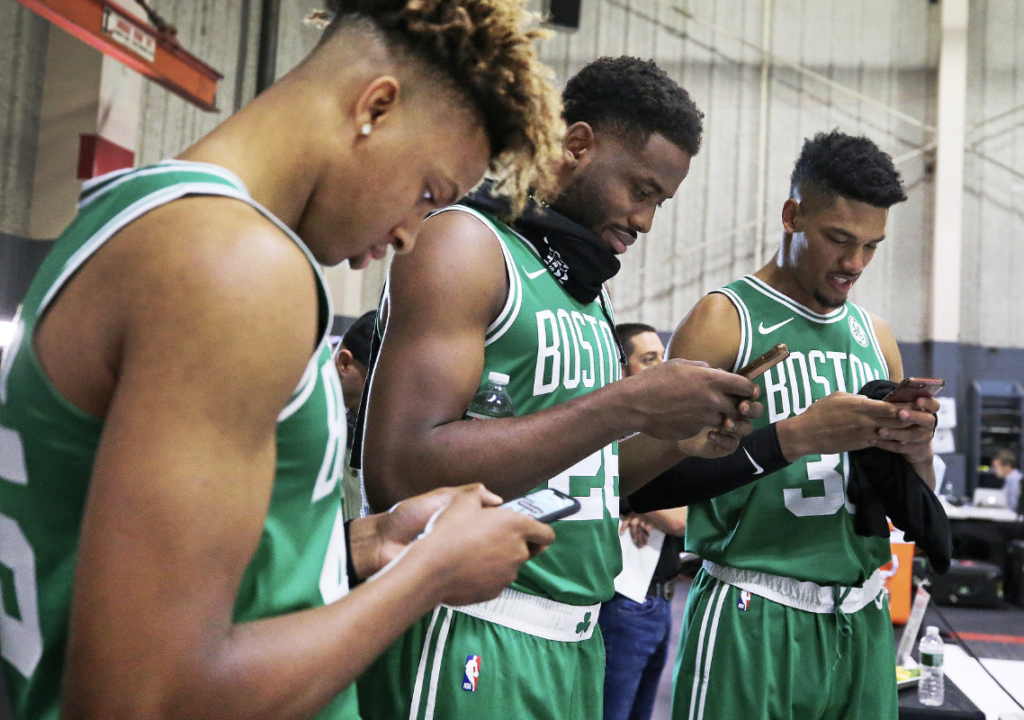 CANTON, MA — The lessons of the 2018-19 campaign hung over the Boston Celtics media day on Monday. The abundance of confidence and guarantees from last fall mellowed into patience.

Marcus Smart stressed it, Kemba Walker said he’ll go with the flow, while Jaylen Brown and Jayson Tatum kept expectations to themselves. Brown guaranteed a NBA Finals trip last year, and his adjustment reflected a locker room that learned from last year’s debacle.

“My mantra for myself and my teammates is just come out and hoop,” Brown said.

The Celtics came together as a full team only recently as Team USA’s summer concluded. Walker spoke at the podium with some congestion, saying he’s still getting to know teammates, staff and trainers. He compared the feeling of joining his second NBA team to arriving at a new school. Brad Stevens helped with recommendations for moving to Boston.

Most of the Celtics acquainted themselves with one another while Walker and company played in China. Robert Williams and Gordon Hayward logged long hours at Auerbach Center. Grant Williams guarded the entire Celtics roster, from Tremont Waters to Tacko Fall.

The Celtics also gave indications of how they’ll play stylistically, and continued to exude the good-guy image stemming from their draft class. Grant will bring the laughs and a constant smile to the locker room. Enes Kanter never stopped finding ways to have fun and interact with others through the summer — passing out baked goods at media day. Tremont Waters thanked Marcus Smart for the text he sent after his father’s death.

They’ll have a face-to-face about the tragedy Waters faced over the summer in time, as a group that scattered across the country and world all summer finally joins together. Jayson Tatum and Romeo Langford affirmed their health after ankle and hand injuries.

Kyrie Irving’s name emerged indirectly, as Kanter answered another question about his No. 11 and a player who shall not be named. Otherwise, the Celtics spoke about the future.

Brown said he won’t let his contract situation hang over his head. He received questions about it from friends, but in the context of cutting his hair before a contract year.

“I’m not losing sleep over it,” Brown said. “I think stuff like that will end up working itself out in the end or however so.”

Tatum credited Team USA with helping him make quicker decisions, impacting the game outside of scoring and getting to the basket more. After a season where he hurled a heavy volume of mid-rangers to begin the year, he stressed layups, threes and free throws.

The emphasis signified a team that changed drastically, but probably won’t play much differently. Daniel Theis said the new cast of bigs will run often. Semi Ojeleye expects a ball-handler, three wings and a big as Boston’s largely rotated into games in recent years.

If needed, him and Brown are prepared for minutes at the five. Ojeleye received similar questions about his position during his draft process and he’s since been convinced that he can play inside against face-up bigs.

The Celtics begin their 2019-20 campaign with their first practice tomorrow.