The Celtics continue to lag offensively and start their sets too late, speeding themselves up as much as the Warriors have. Early offense can force a Game 7. 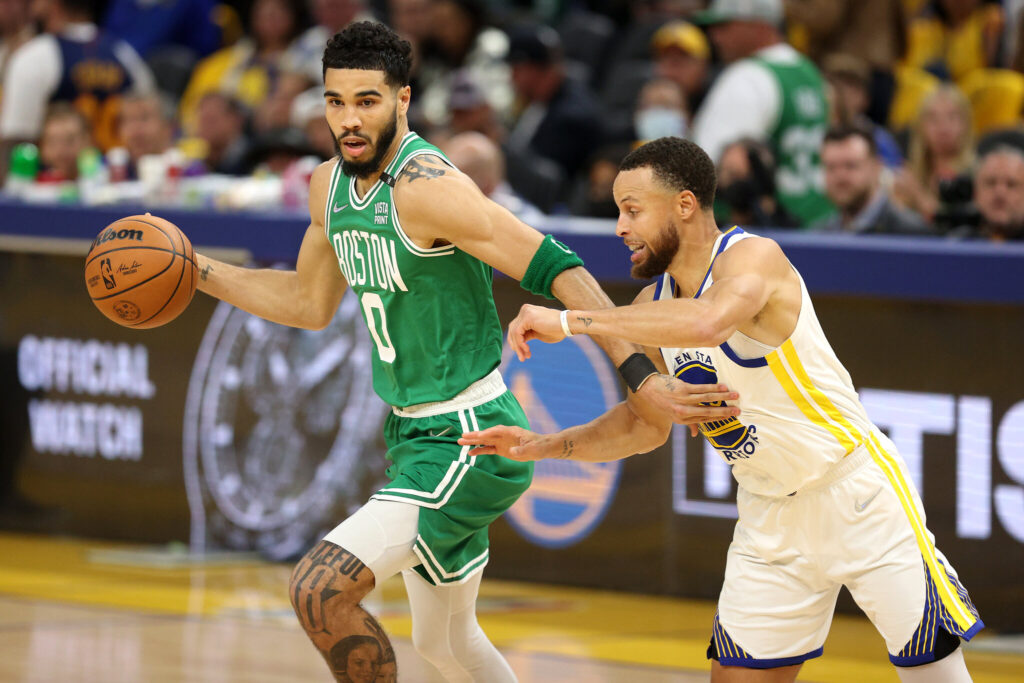 BOSTON — The Celtics flashed a rare glimpse of real practice work to the media on Wednesday following a loss in The Finals’ Game 5 that pushed them to the brink of elimination on Thursday. Marcus Smart, Jaylen Brown, Derrick White, Payton Pritchard, Jayson Tatum and even Grant Williams lined up on the ball, drove into traffic built by Boston assistants and kicked to the perimeter for pull-up shots. As lethargically as the Celtics went through the motions at times, the drill part of the tail end of practice, it did exhibit what Boston needs to keep its season alive. The occasional drop off to Robert Williams III or Daniel Theis in the post from Brown and Smart. The absence of over-dribbling and isolation play.

At one point assistant coach Ben Sullivan shouted out for the Celtics to run some secondary dribble drives, sending White downhill after catching the kick-out for a second level drive-and-kick. Boston thrives on these long possessions. The game-winner against the Nets came on a play where every Celtic touched the ball down to the last second of the clock that Tatum beat with a layup. A sequence of extra passes against the Bucks produced arguably the best possessions of Boston’s season. As easy as it is to bemoan the Celtics’ stagnancy and turnovers, they’ve produced the best assist rate in the NBA Playoffs. Game 5 revealed what’s undermined those efforts. They’re starting their actions too late.

“Play stronger, sprint, get up the court, not let the shot clock dwindle down before we get into our offense, then get up a late shot,” Brown told CLNS Media are the keys to tonight’s Game 6. “Get our pace up and play a lot stronger, that’ll help us and benefit us a lot.”

Every team wants to play fast and run fast breaks and usually, as the Warriors showed through their past two wins, if you’re piling up enough steals and running the other way you’ll probably win the game. Both defenses in the Finals have suffocated each other, holding the other regularly to under 100 points per 100 plays in the half court (Boston scoring 94.3, Golden State 93.9). The Celtics should have an advantage in their layers of ball movement, but they’ve struggled to reach those extra levels due to pressure disrupting them at the point of attack.

Klay Thompson started the series hacking away at Brown kn0wing his ball handling deficiencies. The Warriors have turned up the heat on Tatum too, sending their defense higher to push the forward back toward half court. The Celtics haven’t helped themselves, occasionally unaware of the dwindling clock and still focused on hunting mismatches. In one of the worst possessions all series, Tatum spun away from Steph Curry when he lined him up as the shot clock ticked below 5. More often, the clock hits 14 by the time Boston gets into any sets. A lack of off-ball movement hasn’t helped either.

“I think being in our spots. We just got to be conscious of not walking to spots, getting there with some sense of urgency,” Tatum told CLNS on why the Celtics can’t start faster. “You play in the half court and let them set their defense, they’re really, really good. I think it starts with getting stops, then kicking the ball ahead when you do get a stop and playing in transition. Even if you don’t score, just putting pressure on the defense, then bringing it back out and set something up, but walking the ball up and things like that against them, it’s tough to score.”

Smart, to his credit, ramped up his screening in this series and has become Boston’s most effective pick setter with 1.8 screen assists per game, more than any Celtics big in the Finals. Brown rarely sets them and hasn’t ramped up his off-ball efforts, possibly due to his role as a floor spacer. He’s talked in two separate instances over the past two games about the Celtics’ spacing being off and Ime Udoka agreed.

The Warriors have created that issue by over-helping in spots, taking away the rim as an area where Boston’s creators can pass from and ignoring certain players. They’ve baited Smart into mistakes on the roll, aggressively helped when the Celtics line up their mismatches and rotated behind it. They aren’t terrified of giving Smart, White and Al Horford open threes, particularly when they’re active enough to cut off the corners where those players could be more dangerous. All three lit Golden State up in Game 1 and have struggled since. Yet the Celtics still need to hit them on drive-and-kicks early and often, early the key so those players have options to drive again.

“Not over-penetrate is one. One or two dribbles too many can get you in trouble,” Udoka said. “It doesn’t matter if it’s Jayson, Jaylen, Derrick or Payton, the rotations are there regardless of who’s going to the basket. Spacing is a big part of it, knowing where your outlets are at, not over-penetrating and the physicality, like I talked about, being strong with the ball. Those are all things we’ve emphasized. It’s pretty set. They’re going to be there every time, the low man’s going to come across and they’re going to crack back then the guy is playing the back side. For us, spacing is huge, getting our guys to the spots where we know our outlets are at, then being strong with the ball and making the right reads. Big part of that is physicality with the ball because they are a team that reaches and has really good hands.”

The stats tell a definitive story on the impact early offense for Boston. The Celtics shot 43.5 eFG% with less than four seconds on the shot clock, 46.9 eFG% with 4-7 seconds left and 52.8 eFG% overall in the series. They’re, as Steph Noh illustrated below, taking more shots late in the clock compared to the Warriors, who take more shots early, a product of their prolific transition game. Golden State is playing 17.1% of its possessions in transition, compared to only 12.9% for the Celtics.

Here's the shot clock data from the NBA stats page.

The f-word, not so encouragingly, flew around Udoka’s post-game assessment after Monday’s loss. Fatigue. That could play into why the Celtics have walked into the offensive zone and waited so long to begin their actions, but the unpredictability of the Warriors’ offense has bother them too. They’ve shown some zone and different matchups defensively, Draymond Green playing the back line at times in a drop and attacking Tatum in switches in others. Tatum seems to be methodically scanning the floor, since Boston’s made some mistakes like actually screening Green onto themselves at moments in this series.

“Making the right reads gets you open looks. When you don’t, it doesn’t,” Grant Williams told CLNS at practice on Wednesday. “When you try to force something, the defense beats you. Their defense is very help-oriented. They want you to have to make the right read, and if you don’t, that’s when they get off to the races. When they get off to the races, they’re a tough team to defend and they’re a tough team to control. So for us, it’s just a matter of understanding decision-making and making sure that we know exactly what we’re looking for on both sides of the court.”

Tatum played his best basketball coming out of halftime in Game 5, getting off the ball and freeing himself as the beneficiary of drives-and-kicks. When that happens, he can reassume control of the ball against a less set Warriors defense, or pull up and shoot where he’s 47.5 3PT% in this series. Shaking loose the defense is the most important part with early actions, both Brown and Tatum utilizing their gravity by moving, along with a dose of quality screening on and away from the ball.

It isn’t encouraging to hear the Celtics all offering their own solutions to the turnover avalanche, Smart asking for a bigger role despite lapsing with his own decision-making, while the spacing wanes with Grant, White and Payton Pritchard all off the court in the fourth quarter of Game 5.

The Celtics have shown they’re capable of at least matching Golden State’s offensive output at their best, and there’s a case Boston played the better defense through five games especially weighing it against the competition they’re up against. This series feels poised to go seven games when you look at how close the numbers are, but the Celtics need to get out of their own way on offense, get organized and start earlier for that to happen.

“Just taking your time sometimes, playing a little bit quicker and just sprinting to the corners,” White told CLNS. “Spreading the court out a little bit, because when we’re spaced out, we look pretty good. When we’re not, that’s when their defense can really load up and it’s tough for us to score. Third quarter, it was a lot of fun to watch … it looked like we were a little bit stagnant again (in the fourth), they hit some shots, and it kind of got us back on our heels.”