Celtics Obliterate Lakers 139-107 but Will One Big Win Equal Consistency? 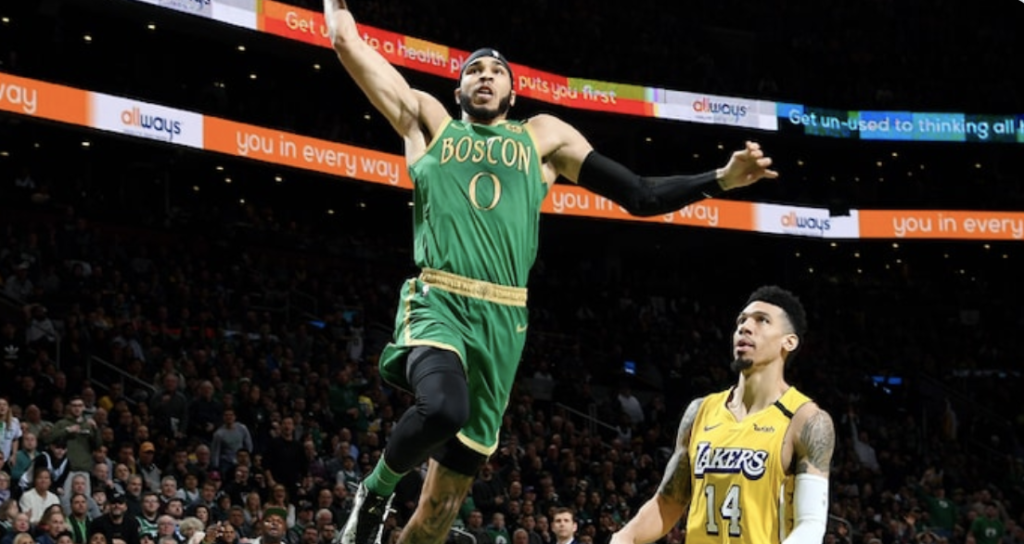 BOSTON — That was fun. But will it last?

That’s the basic question the Celtics need to ask themselves after a 139-107 demolition of LeBron James, a minutes-restricted Anthony Davis, Rajon Rondo and the rest of the Lakers Monday night at TD Garden.

There are certainly reasons to take hope from blowing out the top team in the West that came into play Monday night with a 34-8 record. The Celtics fell behind 8-0 before Gordon Hayward’s straightaway three as the shot clock was winding down got them going.

There was the Enes Kanter show off the bench again, including an 18-point, 8-rebound effort in the first half that served as an all-important answer to the likes of Anthony Davis, JaVale McGee and Dwight Howard at the rim.

The Celtics finally put out a lineup that was fully healthy, a lineup that featured Kemba Walker, Jayson Tatum, Jaylen Brown, Daniel Theis and Gordon Hayward with Marcus Smart and Kanter off the bench. Brad Stevens was able to shorten the bench in a way that maximized Boston’s strengths, spacing and speed.

It all worked to perfection – for one game. After home losses last Wednesday to Detroit and Saturday to Phoenix, the Celtics desperately needed this type of effort.

“Yeah, I mean, we needed to play well,” Stevens said of Monday’s effort. “You know, that doesn’t guarantee results, but we had a – like I said (Monday) morning, we had a great film session (Sunday) that was very much like there’s a lot of things that we can control, and control better than we have. That doesn’t guarantee you’re going to make shots, and things are going to go your way like this.”

The Celtics shot the ball very well in the second and third quarters. Tatum (27) Brown (20) and Walker (20) shot a combined 53.3. percent from the field and were 9-for-19 from 3-point range. You’re going to win most nights shooting like that.

“We were fortunate to put the ball in the basket quite a bit, but we really competed on both ends,” Stevens said. “That was good. It’s good to be as close to full as we’ve been, from a health standpoint. I’m hoping that we can maintain that and build off of it.”

Down 8-0 early, the Celtics punched back against the big, bad Lakers.

“Well I think if – if you couldn’t tell the level on film that you were getting ready to play against, you could feel it the first two minutes. I mean, it was high level,” Stevens said. “They were coming at you. And our guys – I thought Gordon (Hayward)’s three was huge and then he got the driving layup, like that settled us down. And then everybody else took off from there.

“I thought we had a bunch of rim reads that weren’t very good in the first quarter but after that we were better about making the right play, getting guys off their feet, playing off two feet, and then it opened up some opportunities at the end of the game. But they’re so long in there, and they do a good job mixing up defenses, and they’ve got good defenders, so we knew we had to move them side-to-side. Our only chance was our speed, to do that, and I thought our guys did a good job of that.”

The moment of the night came with 8:29 left in the third quarter when Jaylen Brown drove into the paint and didn’t back down from LeBron. He instead rose over him for a dunk that sent Boston on its way toward sealing a much-needed rout. The jam was a flashback to 2018 and Game 7 of the Eastern Conference finals when Tatum dunked on LeBron.

“Jaylen’s energy’s always good. And, but, we needed everybody today,” Stevens said. “I thought everybody played well. But I thought that he – like I said, Gordon’s early – early buckets settled us down and then Jaylen kind of took off after that, made some good plays when (Jayson) Tatum came back in in his second stint; he was great. You know, Kemba (Walker) was pretty steady all the way through. But those guys – everybody – we needed everybody’s energy tonight. I mean that – that hit us square in the face at the start of the game.”

But the key for these Celtics is continuing it for an extended period. The trademark of the Celtics over the first two months, as they were building their impressive record, was the ability to put teams away and not let them hang around like last year’s squad did. It was a characteristic that reared its ugly head over the last eight games when the Celtics when 2-6.

The Celtics are 28-14, a very good record but a team that needs to show that Monday night was not a fluke. They embarrassed a team that has every right to think it will come out of the Western Conference and make their way to the NBA Finals. The key for the Celtics is to prove to themselves they have a fighting chance against the likes of Milwaukee, Philadelphia, Miami and Toronto.

“I thought we bounced back pretty well, especially playing the top team in the West,” Tatum said. “We lost three in a row, so we were just looking to come out, obviously get a win, and just play with more intensity and more energy throughout the game.”