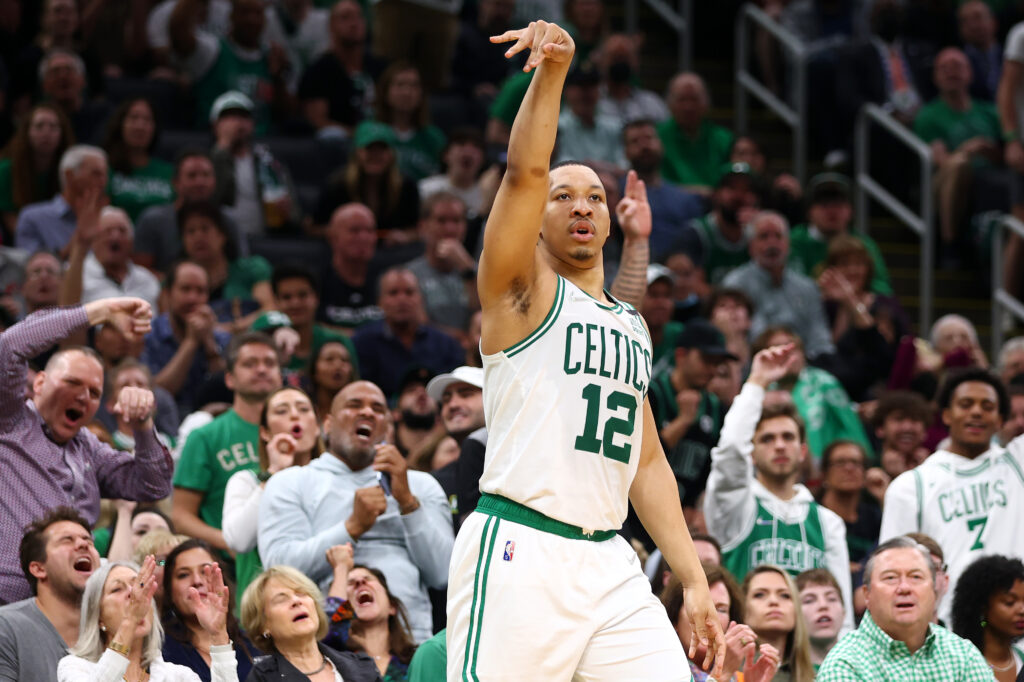 BOSTON, MASSACHUSETTS - MAY 15: Grant Williams #12 of the Boston Celtics shoots the ball during the first half against the Milwaukee Bucks in Game Seven of the 2022 NBA Playoffs Eastern Conference Semifinals at TD Garden on May 15, 2022 in Boston, Massachusetts. NOTE TO USER: User expressly acknowledges and agrees that, by downloading and/or using this photograph, User is consenting to the terms and conditions of the Getty Images License Agreement. (Photo by Adam Glanzman/Getty Images)
Share
Facebook Twitter Email

Grant Williams just had his Kelly Olynyk game. The 3-year veteran put on an absolute clinic at the TD Garden on Sunday afternoon, and was the pulse that led the Celtics to a 109-81 series clinching victory over the Milwaukee Bucks.

Williams had a game high 27 points, and attempted eighteen three-pointers – hitting 7 of them. He also grabbed six rebounds and had two blocks. Jayson Tatum complimented Williams nicely with 23 points of his own and knocked down five three-pointers.

Giannis Antetokounmpo led the way for Milwaukee scoring 25 points and corralling 20 rebounds. He, along with the rest of his team, struggled mightily scoring the ball. The Bucks hit just four of their 33 three-point attempts.

Boston’s victory in game 7 against the Bucks leads them into their fourth Eastern Conference Finals in the last six years.

They haven’t won any of them.

According to BetOnline.ag however, they should win this one. They are the betting favorite to advance to the NBA Finals:

Check out our post game show on The Garden Report HERE:

The Heat are going to be just as tough as Milwaukee was. They’re the deepest team in the NBA and have an absolute assassin in Jimmy Butler leading the way. Butler leads them in scoring this postseason averaging 28.7 points per game.

Erik Spoelstra established himself as a top-tier coach in this league during the Lebron era in Miami – and he hasn’t slowed down since. He was named one of the “15 Greatest Coaches in NBA History” alongside the NBA’s Top-75 Greatest Players for the 75th Anniversary.

Prediction: Much like the semi-finals against the Bucks, this is going to be a grind of a series. However, Boston is the most well-rounded team, and has the most well-rounded player in in the league Jayson Tatum. The Celtics (-170) wins the series in seven games and advance to their first NBA Finals since 2010.