The shorthanded Boston Celtics waxed the Washington Wizards 130-121, as Jaylen Brown scored 36 points to lead the league's top-ranked offense to a win. 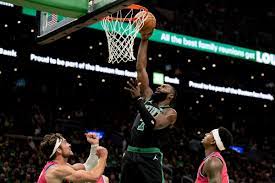 For the first time in 50 years, the Boston Celtics have scored 120 points or more in seven straight home games.

The shorthanded Boston Celtics waxed the Washington Wizards 130-121, as Jaylen Brown scored 36 points to lead the league’s top-ranked offense to their 12th win in 13 games.

The Boston Celtics handled the visitors by outscoring Washington in each of the first 3 quarters, building a 26-point lead before taking their foot off the gas pedal. The Celtics earned a +27 differential from beyond the arc and scored eight baskets off live-ball turnovers.

Boston played without superstar Jayson Tatum for the first time this season, but it did not affect their ability to create good looks. Seven different Celtics posted double figures in scoring as the team slashed 55% FG/46% 3PT/100% FT shooting splits to eclipse the 50/40/90 threshold for the 3rd time this season.

The Boston Celtics improved to a league best 16-4 and will now host the Hornets and Heat twice to finish the home stand.