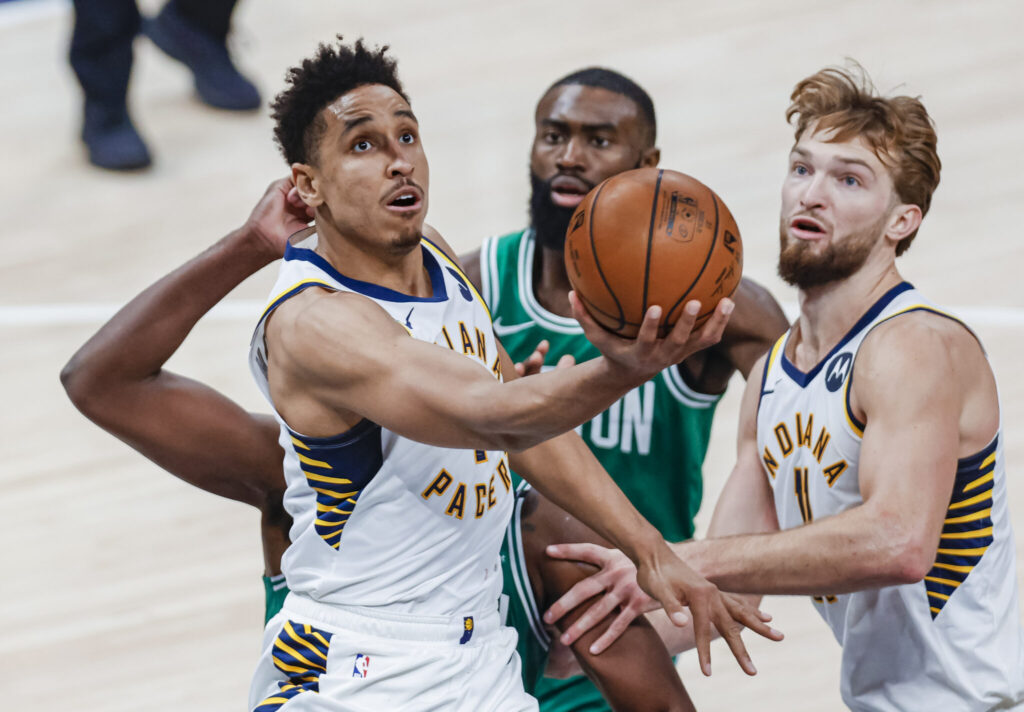 INDIANAPOLIS, IN - DECEMBER 29: Malcolm Brogdon #7 of the Indiana Pacers shoots the ball during the game against the Boston Celtics at Bankers Life Fieldhouse on December 29, 2020 in Indianapolis, Indiana. NOTE TO USER: User expressly acknowledges and agrees that, by downloading and or using this photograph, User is consenting to the terms and conditions of the Getty Images License Agreement. (Photo by Michael Hickey/Getty Images)
Share
Facebook Twitter Email

The Boston Celtics (15-17, 15-17 ATS) have lost three straight games to fall to ninth in the east, trying to avoid their first four-game slide since the back door sweep at the hands of the Milwaukee Bucks in 2019. They host the Indiana Pacers (15-15, 14-16 ATS) at 7:30 EST in the third meeting between teams that split a tightly-contested mini series in Indiana in December.

Marcus Smart (calf) and Romeo Langford (wrist) remain out for Boston. Caris LeVert (abdomen) and TJ Warren (foot) are out, with JeKarr Sampson (COVID-19 protocol) questionable for the Pacers.

The Celtics have been favorites in each of their games against sub-.500 teams this week and lost all of them with abysmal second halves. Only the Hawks loss was a wall-to-wall beating.

This matchup calls back to a better time for Boston, when Marcus Smart was healthy, Payton Pritchard thrived as a bench point guard and Robert Williams and Grant Williams held down the second unit front court together. Jaylen Brown shot 15-of-26 in the mini series that Boston almost swept before a defensive breakdown on Damontas Sabonis in the final seconds of game one.

Victor Oladipo hurt the C’s in game two, but Jayson Tatum and Brown supplied enough offense to hold him off. He’s gone and the returning player Caris LeVert remains out following a kidney mass scare that the trade’s physical revealed. Warren has also missed most of the season since Indy’s 3-0 start, after which they’ve gone 12-15.

Indiana is 15th in points per game scored and allowed, though defense counts more in this year of ample offense. The Pacers are +1.6 per 100 possessions thanks to their 12th-ranked 110 defensive rating. They’re a league average shooting team and don’t rebound well, but their steal and block totals are top-5.

Thank Myles Turner, a defensive player of the year front-runner averaging 3.4 blocks and 1.1 steals per game with the Pacers only allowing 105 points per 100 possessions in his minutes.

Is it fair to ever pick the Celtics at this point? Kemba Walker received a boost last week in Game 2 of the Hawks mini series after a night off in Game 1, returning with his best game of the season. He could bring similar activity tonight as a fresh body, and Indiana has allowed 110 points in four straight games.

The Celtics, despite their lapses, hold firm defensively on a per-100 basis and their dreadful offense has driven runout opportunities for opponents. They’re still seventh in points per game allowed, but as they’ve slid to 28th in assist rate, bottom half of the league defensive rating and as well as turnovers on the way to a +0.4 per 100 possessions.

Boston probably has to win at some point and playing another two-big lineup probably helps them. They’re 8-5 at home and Walker’s play is slowly trending upward (21 PPG in his last six). I’d hesitantly pick them tonight.