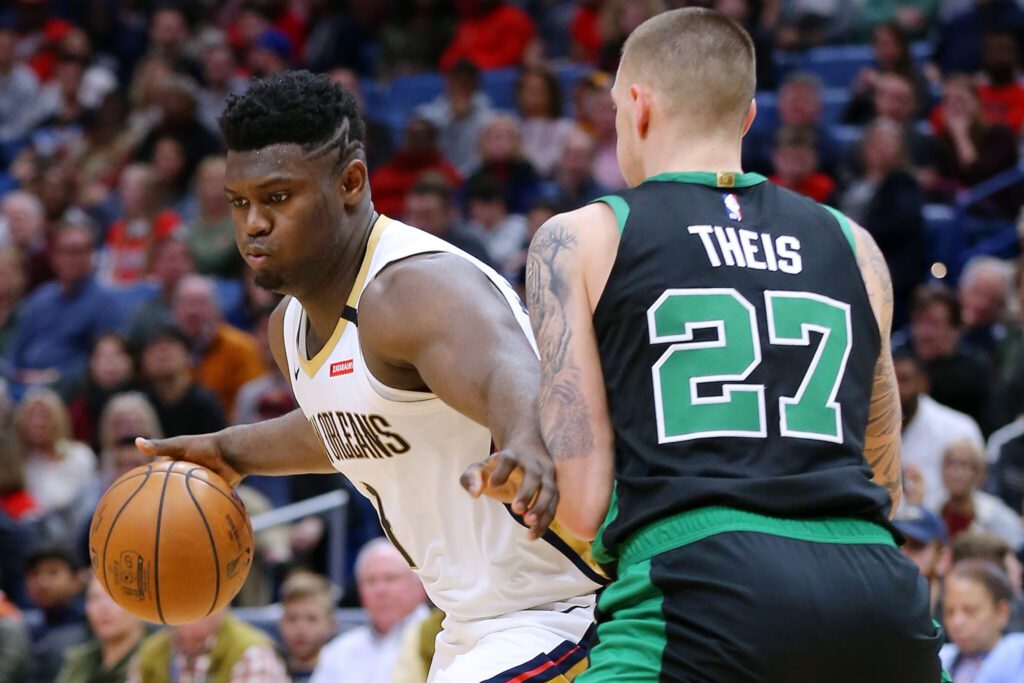 NEW ORLEANS, LOUISIANA - JANUARY 26: Zion Williamson #1 of the New Orleans Pelicans drives against Daniel Theis #27 of the Boston Celtics during a game at the Smoothie King Center on January 26, 2020 in New Orleans, Louisiana. NOTE TO USER: User expressly acknowledges and agrees that, by downloading and or using this Photograph, user is consenting to the terms and conditions of the Getty Images License Agreement. (Photo by Jonathan Bachman/Getty Images)
Share
Facebook Twitter Email

The Boston Celtics (15-14, 15-14 ATS) begin a short trip to the ailing south, uncertain if it will extend beyond this afternoon’s game in New Orleans against the Pelicans (12-17, 12-17 ATS) at 3:30 EST. They’re scheduled to move on to Dallas on Tuesday, where the Mavericks had games on Wednesday and Friday postponed by the Texas deep freeze and snow emergency.

Marcus Smart (calf) and Romeo Langford (wrist) remain out for Boston. Steven Adams (ankle) will be a game time decision for the Pelicans.

According to the online sports book Betonline.ag, the Celtics are 2.0 point favorites

The Pelicans (29th) and Mavericks (27th) are two of the worst teams in defensive rating, presenting a chance for the Celtics to build a winning streak. Dallas will enter Tuesday’s game on the back half of a back-to-back if their game against Memphis on Monday is played.

Starting with New Orleans, Stan Van Gundy’s defensive rotations have been a mess all season. The Pelicans allow 116 points per 100 possessions, 115.1 points per game, 47.4% shooting from the field and 39.8% from three. They don’t foul often or block shots.

The Pelicans fare better into some of their bench units, particularly when Jaxson Hayes plays, but their regulars all hold defensive ratings above 115. JJ Redick is unplayable in a game like today’s for New Orleans, and Zion Williamson, Brandon Ingram and Adams have all had bad years on that end of the floor. Eric Bledsoe’s addition and the loss of Jrue Holiday haven’t helped.

Offense is a different story of this group, surviving by scoring 115.8 points per 100 possessions to close the gap on what they give up. Zion scores just short of 30 points per 36 minutes, shooting 63% at the rim with the ability to torture Boston’s interior. Ingram, Bledsoe and Lonzo Ball are all shooting better than 38% from three.

A shootout and regression from Friday’s defensive success seem predictable for these inconsistent Celtics. Zion torched a better Celtics team defensively in New Orleans last year and opponents continue to succeed going to the middle. A better Celtics interior performance on the defensive end still resulted in 52 points in the paint for Atlanta after they dropped 60 on Wednesday.

Zion is a nightmare matchup given where Boston is weak, but the emergence of Robert Williams opens more defensive possibilities for Brad Stevens. Williams thrived as a rim protector, blocking shots and cutting off entry passes into the lane during a 33-19 second quarter. The Celtics allow 101 points per 100 possessions with Williams on the floor this year, which would rank first among any team by five points.

The Celtics need more of that impact, even if they have to swallow Williams nearly fouling out in that quarter and committing a ridiculous goaltend on a Trae Young jumper. Tatum, dominant defensively on Friday, has regressed in his own end this year, but largely thrives in tandem with Williams in those units.

They’ll have their hands full with Ingram’s improved creation ability, while Bledsoe presents Kemba Walker with the opposite level of resistance he saw from Young last week. This one looks like a one-possession game. I’m betting on the better defense.