The Celtics expressed both confusion and frustration regarding the Ime Udoka suspension and the lack of details surrounding it on Monday. 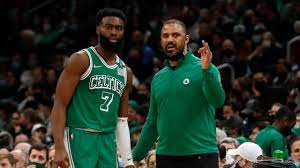 CANTON, Mass. — Jaylen Brown, Jayson Tatum and Marcus Smart, among other Celtics players, expressed shock, confusion and some frustration over the suspension of Ime Udoka this week, saying that they found out on Twitter and know about as much as everyone else about what happened. The Celtics have stood by the principle of privacy in providing few details about Udoka’s alleged improper relationship(s) that violated team policy, leaving Boston shocked by the disappearance of its head coach days before training camp.

Joe Mazzulla will take over and Bobby Manning and Josue Pavon discussed the trust he and the organization will need to earn from the players for the Celtics to have any hope this season.