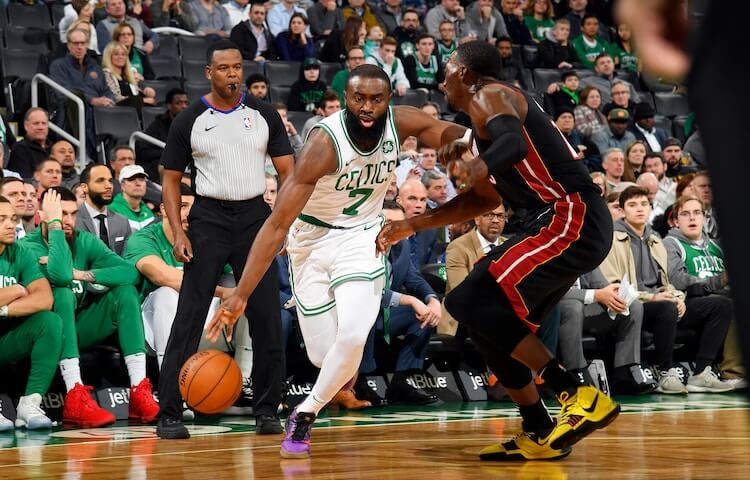 With 20 games under their belt, the Celtics continue to prove why they’re the deepest team in the Eastern Conference.

Not even the loss of Gordon Hayward — who was playing his best basketball in two years — to a fractured left hand can slow down this year’s Celtics team. They’ve won eight of their last 12 games in his absence and Wednesday night, without Marcus Smart, Boston added another impressive victory to its win column.

Capitalizing on an 18-5 run, the Celtics took a 52-44 lead into halftime and essentially never looked back. Jaylen Brown had a lot to do with that, he flirted with a career-high (34) after scoring 21 of his team-high 31 points in the second half of Wednesday night’s 112-93 win over the Heat.

However, Brown’s electric performance doesn’t tell the entire story of what happened Wednesday at TD Garden. Kemba Walker and Jayson Tatum combined for 30 first-half points, Celtics buckled down defensively in the second quarter, which led to an absurd run to end the half and eventually set the stage for the third-year forward.

Led by guys like Semi Ojeleye, Daniel Theis, Robert Williams, and Brad Wanamaker, the Celtics closed out on Miami’s shooters, clogged the passing lanes and consistently applied pressure on the Heat in the paint and from the perimeter. Boston’s commitment to defense led to 18 Heat turnovers.

“We played hard. That was the key,” Stevens said. “We played hard. We played really hard in the second and third quarter. Defensively, those were two of our better quarters of the year.”

The effort from top to bottom shined through against the Heat, it’s been an ongoing pattern of late. Theis finished with a plus-24 game rating to go with his three blocked shots and pulled down nine rebounds, Walker finished with 28 points and Tatum scored 19 to go with three blocks of his own.

Jimmy Butler (37 points) had the best performance of the night, he drained 12-of-18 from the floor, including six 3-pointers but it was no match against Boston’s stifling team-defense that distracted Butler’s teammates from finding their offensive rhythm. This was the kind of game where the defense from Ojeleye, Theis and Wanamaker resonated just as much as the 78-point combined scoring production by Brown, Walker and Tatum.

Stevens has been taking on the tough task of filling the void in the frontcourt’s defense left behind by Al Horford and Aron Baynes. Still tinkering with lineups, Stevens started Grant Williams in an attempt to go small against a pair of seven-footers in Bam Adebayo and Meyers Leonard.

It resulted in the Heat grabbing an 11-point, first-quarter lead before Stevens turned to Robert Williams (10 rebounds, 1 block) for help while leaning on his starter Theis, who logged in over 26 minutes, to help anchor the center position.

“We didn’t play the two big lineups after the first quarter,” Stevens explained. “Part of that is we just have limited numbers with guys out. With Smart, obviously Hayward, has been out for a while, but Smart out as well. They are bigger so we thought we maybe could get a way with some of that. We haven’t really tried that two big lineup, but then I thought that their speed was an issue for that.

“In the second quarter, we started playing defense the way we want to play. We probably were the beneficiary; they’ve had a really tough stretch playing last night in Toronto and flying back. It’s just part of it. We played a lot more like we have, I thought our rotations were a lot shorter the rest of the game.”

Recently, he’s had his players committed to defending at a high level, especially in the final frame.

Throughout the last four outings, Celtics opponents are averaging only 23 points per game in the fourth quarter. Making up for Hayward’s offensive production, for the most part, has fallen on the laps of Walker, Tatum, and Brown and lately they’ve elevated their game to another level.

With Jaylen Brown’s 29.5 points leading the way, the trio is averaging 76 points in its last two games — a pair of handsome wins against the Knicks and Heat that has led to a 15-5 start one quarter into the 2019-20 season.

Boston’s defense has led to extraordinary wins against upper-echelon teams like the Raptors, Bucks and now the Heat — three of the conference’s top-5 teams. And with the Sixers only one week away from making their season debut at TD Garden, the Celtics could be on the verge of making another emphatic statement to the rest of its conference.