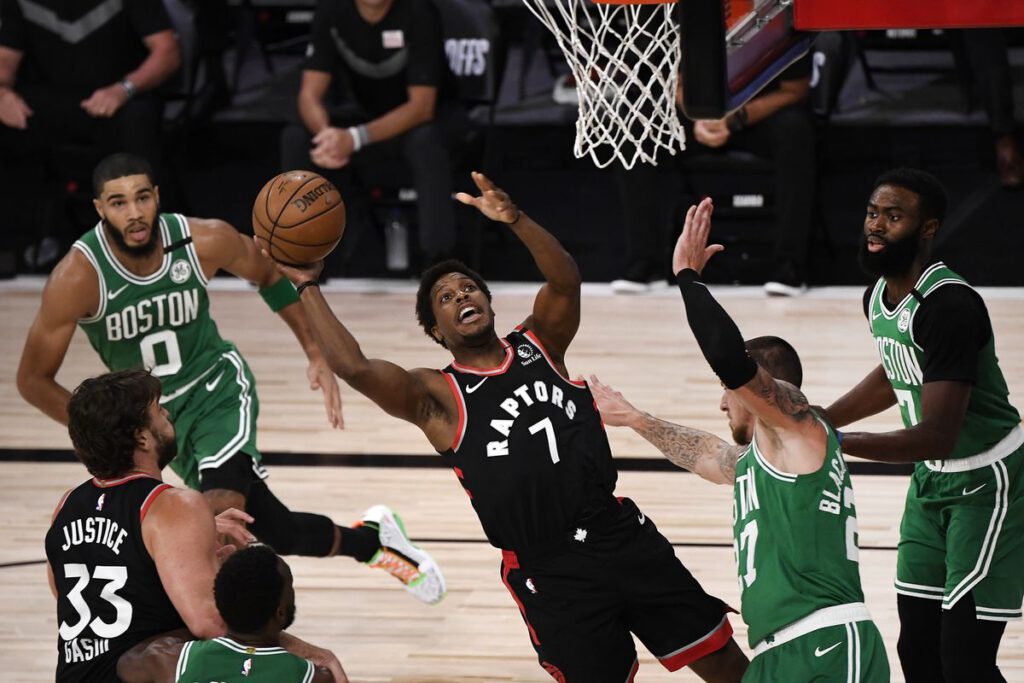 According to the sports book Betonline.ag, the Celtics enter as 1.5 points favorites again over the Raptors. Toronto strangled Boston’s offense to 93 points, 20% three-point shooting and only nine Kemba Walker attempts in Game 4. The Celtics largely blamed themselves, happy with how they attacked the zone, as Walker vowed to shoot more.

Still, the Raptors appear closer to the champion version of themselves than they’ve been in the bubble to this point. Pascal Siakam, shooting 39.5% from the field in the playoffs before Saturday, shook a slow start to finish 7-for-14 in the win. He added 11 rebounds in Toronto’s first winning effort on the boards, which yielded 24 second chance points. Kyle Lowry and Fred VanVleet, non-factor shooters in Game 1, combined 9-for-21 in the win. The Raptors’ mixed alignments defensively appear to at least make Boston glance an extra second.

The shooting splits don’t look impressive for Toronto, thanks to uninspiring first halves that ended tied in Games 3 and 4. In the second halves, Toronto averaged a 54-45 advantage, shot 51.2% from the field and 44.4% from three, with only 4.5 turnovers to Boston’s 8. If the Celtics are beating themselves, it’s with giveaways.

The Celtics need to clean up their late-game execution to stand a chance in this series. Save for a few poor Raptors fouls, Pascal Siakam stepping out of bounds and what ultimately became a lost opportunity for a timeout in Game 2, and Toronto could be up 3-1 right now. On Thursday and Saturday, Boston shot 45.5% from the field and 13.3% from three. Poor possessions from Jaylen Brown and Jayson Tatum during the Game 3 collapse allowed the OG Anunoby situation to happen.

Toronto also forced Brad Stevens to second-guess his big man rotations in the two losses. Enes Kanter entered for a -4 stretch for four minutes in Game 3. Grant Williams manned the center position with Daniel Theis and Robert Williams missing key stretches of the second half, due to switch-ability concerns against a 7-for-9, 4-for-4 from three Serge Ibaka.

This looks more and more like Toronto’s series with Boston unable to build large runs. The Celtics’ offense boasts more talent than the Raptors’, which gives them the ability to stay in these games, but Toronto thrives by valuing possessions more and turning misses into second chance points.

To some degree, this is a make-and-miss series and that’s revolved around the play of Siakam and Jaylen Brown, who started Game 3 0-for-8 from three. It’s true that even 25% shooting there would’ve changed Boston’s fortune drastically.

Brad Stevens said on Sunday there’s several adjustments coming from the Celtics and in a series that’s swung in two directions already, don’t be stunned to see a third shift for the Celtics tonight. Bettors beware, it may be smart to take the points here, however few there are for the Raptors.