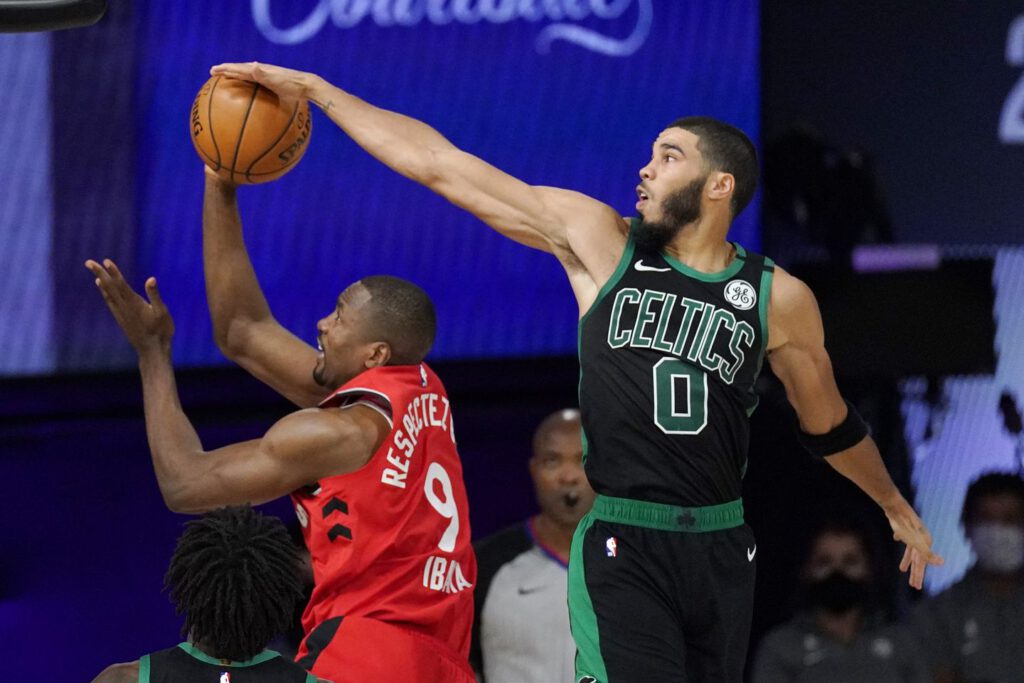 According to the sports book Betonline.ag, the Celtics enter as 3.5 point favorites over the Raptors for the third straight game. Vegas set lines of fewer than 2 points for each of the first five games in the series, setting Toronto as favorites during the first two. Then the C’s unloaded a 111-89 victory in the tie-breaking game on Monday.

Jaylen Brown bounced back from a 4-for-18 Game 4 to shoot 10-for-18 with 29 points and an emphatic dunk where he reached over OG Anunoby’s head several steps from the rim. The Raptors scored 11 points in the first quarter, a low for any playoff team, and finished shooting 38.8% from the field and 30% from three.

Serge Ibaka received treatment for an ankle injury during the game and arrived at his press conference on Tuesday in a temporary boot on his left foot. He’s listed as questionable for Game 5.

The Celtics led by 14 after the first quarter on Monday as they rotated into their bench lineup. A Grant Williams centered lineup that played a part in losing Game 4 thrived in the second quarter, thanks largely to a string of threes from Jayson Tatum and Brad Wanamaker that pushed the Celtics ahead 62-35 at half and effectively ended the game. Robert Williams III played 8 minutes after Serge Ibaka (50% from three in this series) scored 18 points in Game 4.

If Ibaka misses today’s game it opens both sides to lineup adjustments. Nick Nurse said the Raptors would stretch down to play Chris Boucher and Rondae Hollis-Jefferson, who have played almost no role in the series to this point. The Raptors figure to go smaller, with Marc Gasol struggling immensely in this series (0 points in Game 4). Nonetheless, the Raptors lose 11.8 points per game in Ibaka in a series where they’ve averaged 97.2 PPG. Boston can either chase them smaller, or use size that’s led to four rebounding victories.

The Celtics emphasized stopping the fast break in this series and have, with Brad Stevens minimizing their success earlier in the series by having the Celtics create their own standard of fast break points. After Game 1, Stevens counted 30 fast break points when the officials stats showed seven for Toronto.

The Celtics overall lowered a team averaging 18.8 fast break points per game to 12.2 in this series, leading to struggles for players like Kyle Lowry, Fred VanVleet and especially Pascal Siakam. Siakam scored 10 points in 28 minutes, dominated again in his matchup with Brown. If Brown continues to win that matchup, this will be a difficult game for Toronto to win and Nick Nurse knew that when he emphasized Siakam’s play in Game 5’s post game presser.

If Ibaka does not play it opens the door to moving Siakam to center and courting wings like Matt Thomas, who scored 10 points on 4-of-6 shooting in the second half. Those lineups could leave Toronto exposed defensively, but right now they’re losing the series through their lack of offense.

Given Kemba Walker’s dominance in the series, the possibility that the Celtics could utilize Williams III again with no Ibaka playing and smaller lineups likely playing, this series ends tonight.