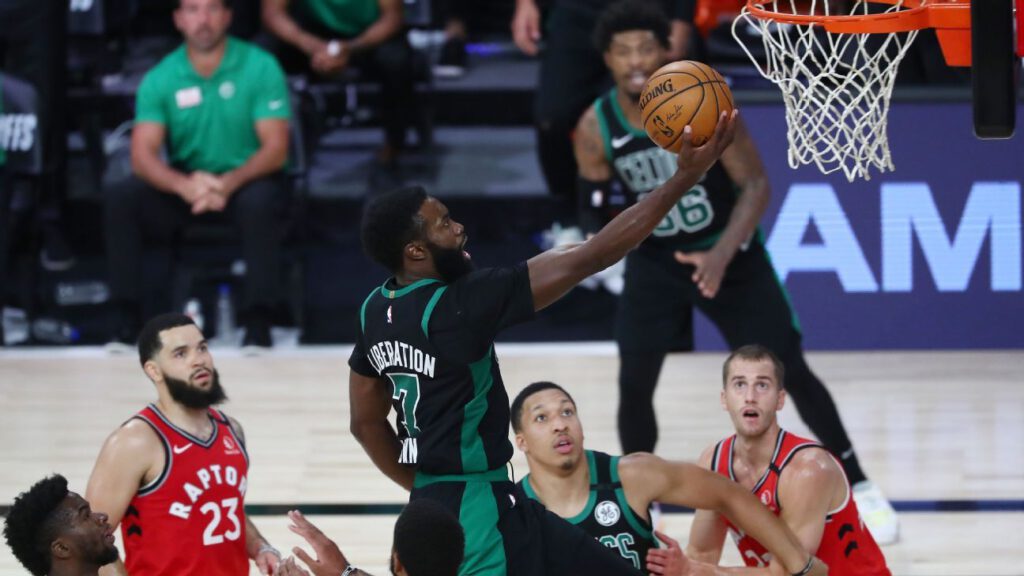 The Boston Celtics and Toronto Raptors finish their epic Eastern Conference semifinal matchup on Friday at 9 p.m. EST in a Game 7, the third of these NBA Playoffs. Both teams enter only one win from an Eastern Conference Finals meeting with the Miami Heat, with the Raptors winning three of the last four games after trailing 0-2.

According to the sports book Betonline.ag, the Celtics remain 2.5 point favorites over the Raptors for the fourth straight game. Vegas slated Toronto as favorites during the first three games, then held the Celtics as slight favorites in Games 4-5 until Game 6, when the Celtics reached -3.5 before losing in a double overtime thriller.

The Raptors successfully funneled 30 shots to Jaylen Brown, who hit Toronto hard with two three-points in the first quarter and two more early in the fourth. Marcus Smart posted a triple double, while Jayson Tatum and Kemba Walker struggled through turnovers and poor shooting. Serge Ibaka played through an ankle injury to score 13 points, while Norman Powell exploded for 10 points in double overtime to secure victory.

Trending
Red Sox “Lose” Xander Bogaerts Sweepstakes – Do They Have Enough to Win a World Series?
Boston beat the Bucks and lost to the Cavaliers in their last two Game 7s, along with a win over the Wizards in 2017. The Raptors defeated the 76ers last year in their only Game 7 under Nick Nurse.

The story of this series through six games became the Celtics’ firepower and the Raptors’ prowess in close games. Tonight never happens without the second greatest corner three in Raptors history, with 0.5 seconds remaining in Game 3, from OG Anunoby. They also edged out Boston in close wins during the next game and in Game 6, while they lost Game 2 by squandering their own last chance when Pascal Siakam stepped out of bounds.

Anunoby has been a low-key killer in this series in Siakam’s place, shooting 47% from the field and 50% from three with 7.8 RPG, but the Raptors took him off the floor to win Game 6. Nick Nurse said he labored for several games about going small until Marc Gasol’s struggles and Serge Ibaka’s injury forced the move late on Wednesday. Powell exploded with an opportunity to play alongside the starters, recording the game-tying three and game-winning steal in double overtime along with 10 points in the five minute frame.

The referees, thanks to a timeout call, missed foul on Kemba Walker to end the fourth quarter and reversed foul call on a Daniel Theis attempt inside, drew the ire of Boston fans. As did Nick Nurse, cleared of wrongdoing while seemingly drawing a Tatum pass that became a key fourth quarter turnover. The Raptors ultimately won on Kyle Lowry and Powell executing at a higher rate than Boston’s stars to close Game 6.

The Raptors changed this series through mixed looks defensively, offensive rebounds and eccentric shot-making from Kyle Lowry. Through six games, Siakam remains far from his typical form, but provided an important 10-foot jumper in double overtime. Any appearance from him tonight could secure Raptors victory.

For the Celtics, an early lockdown defensive performance and burst of scoring from it is their clearest path to victory. They won Game 1 and Game 5 in decisive blowouts thanks to their early lockdown work on Toronto’s stars. The Raptors can string together short comeback runs, like an 8-0 burst before halftime down 10 in Game 6, but don’t have the half court firepower to overcome an early 20 point deficit.

The Raptors seem to own the clutch and in Game 7 that could prove pivotal. They overcame deficits in both overtime periods on Wednesday, held off a Celtics comeback attempt in Game 4 and their exploits late in Game 3 will go down in NBA lore with a win tonight. They’ll need to withstand early fire from the Celtics, and both teams will need to rotate intelligently after expending eight players (an NBA record) 50+ minutes in Game 6 between them. The Raptors have more depth to do that, and with a win tonight this feels more and more like their revenge, prove-it year.