Celtics Revert to Worst Habits in Game 3 Setback Against Heat

The Celtics turned the ball over 24 times and watched Jayson Tatum and Jaylen Brown set a tone with sloppiness, complaining and playing in a crowd. 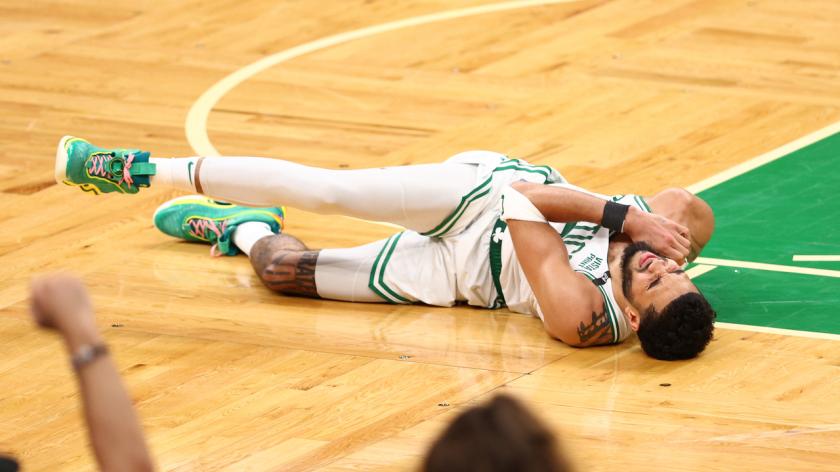 BOSTON — The Celtics talked about nearly everything that happened in Game 3 in the day leading up to it. The physicality the Heat promised to punch back with after a blowout loss in Game 2. The aggressiveness they expected Bam Adebayo to emerge with after only shooting 10 times in the first two games of the series. Not being content. Not being complacent.

“A little unusual being caught off guard by physicality,” Ime Udoka said post-game. “It’s not like (Miami) changed much schematically.”

Yet the Heat pummeled the Celtics, leading wire-to-wire in 109-103 win more lopsided than it appears. Miami built a 26-point advantage in the first half that held at 15 through three quarters before Boston pushed within one point with 2:40 remaining. Max Strus answered with a three and forced Jaylen Brown to throw the ball away at the other end for a shot clock violation, one of 24 Celtics turnovers that marked the most committed by a team in the playoffs since 2018.

Udoka thought the giveaways, complaining to officials and not trusting teammates cost Boston the game. Bad habits continue to linger despite the Celtics’ growth and ability to suppress them, and when they emerge in droves it raises the question of whether this group is ready to win a championship. Boston has shown a propensity to respond, overcoming 2-1 and 3-2 deficits to the Bucks in round two and 4-0 following losses this postseason.

“From the beginning, their pressure bothered us and we didn’t respond. It’s happened a couple of times this playoff run,” Horford said post-game. “It’s something that we continue to fight and it seemed like every time we put ourselves in a position, we turned the ball over.”

The afternoon began with optimism Kyle Lowry would return and pessimism regarding Robert Williams III’s status after knee soreness and swelling reemerged stemming from his bone bruise in round two. Lowry started and Daniel Theis filled in for Williams, struggling immediately as the Heat pushed the pace and Adebayo matched his shot output from Game 2 with six shots in the first six minutes, hitting five.

Adebayo discarded Horford easily on one early post-up score, while P.J. Tucker blew by Grant Williams on another first quarter basket in uncharacteristic moments of one-on-one breakdowns defensively. Marcus Smart fell trying to draw a foul on Jimmy Butler as the Heat shot ahead 39-18 through the opening frame. Early, worrisome visuals setting the tone for another night where the Celtics got away from what worked.

“Having carryover from what’s been successful for us throughout the playoffs, throughout the second half of the season,” Udoka told CLNS Media. “We saw it in the Milwaukee series at times, we saw it in Game 1 and Game 2, the difference between 10 turnovers in Game 2 and what that can get us to. So when you turn the ball over 24 times and gift them 33 points out of that, dig yourself a hole … due to playing in the crowd. We understand how they’re going to guard us, they’ve done it all series. Every team does that, wants to load up and you over-penetrate and get yourself in tough situations instead of relying on your teammates, that’s the result sometimes.”

The crowd stayed into the game despite the early deficit, roaring to their feet when Payton Pritchard entered the game in the second quarter and defended Butler tight through the end of the shot clock. Butler missed a mid-range take, which Smart grabbed and quickly turned over in the back court to Lowry, who found Butler for a three-point play.

Miami went cold sooner after, missing seven straight threes as the Celtics a 10-0 run to finish the first half capped by Tatum slipping into the post screening for Smart, popping to the perimeter and burying a three. Tatum only hit three shots on 14 tries though, combining for 13 turnovers alongside Brown and setting a career worst as a duo in that category. Brown drove to nowhere and committed seven. Both fumbled the pocket pass.

Butler didn’t play in the second half with knee inflammation, not expected to be a long-term concern, but nonetheless another lost opportunity for Boston in the short term. The Heat fell to 4-for-17 between the end of the first and beginning of the second half, Smart going down chasing a miss with a turned ankle and returning moments later amid a Celtics run in Paul Pierce-esqe fashion. Grant Williams grabbed an offensive rebound at the end of the shot clock and allowed Brown to score inside following Horford’s three. Smart buried a three after checking back in and pushed the Celtics to within 10.

Lowry and Tyler Herro peppered Boston with run-stopping shots though alongside Victor Oladipo. Adebayo flushing a three-point put back through a foul and finding Tucker for three to close the quarter on the short roll. After all the fanfare following Smart’s return, the Heat held the Celtics to a 25-25 tie in the third, landing them right back where they stood at halftime. Tatum finished the second half 0-for-4 with three turnovers.

“(Tatum) just had a big game in Game 2 and all they talked about was upping their physicality,” Udoka told CLNS. “Being embarrassed at home, that’s all we talked about not being complacent or content about getting a win at their place. Understanding how they’re going to guard guys and be physical, it looked like we were kind of wilting to the pressure and started complaining to the refs and took us out of the game from the start. Disappointing to come out that flat in (a) conference finals game.”

The Celtics drew one final break when Udoka successfully challenged a block by Williams on Adebayo originally called a foul with Boston back within nine points. Tatum used the opportunity to throw up an air ball over Strus. He reached for a defensive rebound on the other end unable to keep Tucker out of position for a put back. Then, after driving into traffic, he fell with a stinger as play continued and the Celtics kept rallying, but never overcoming that deficit with Tatum rolling on the ground before exiting to the locker room while Brown converted a three-point play.

Tatum checked back in 3:40 remaining and Boston within four points after a Brown layup and Tucker wide open miss the other way, and Tatum immediately squandered two possessions around Brown’s key giveaway.

Brown scored 40 points and kept Boston close following that slow start, another habit emblematic of the early-season Celtics. He turned the ball over seven times. Falling behind, catching up late and coming up short. Boston came close to seeing its season end prematurely due to bad habits reemerging in a Game 5 meltdown. They responded and won the series. Now, the stars will need to do the same or face questions, again, about readiness.

“We put a lot on their shoulders,” Horford told CLNS post-game. “Score the ball, make plays for others, pass, defend, it’s just a lot of things that go on. It’s a challenge, it’s not easy and they’ve done such a good job all year. We rally, we try to do things if, for whatever reason it’s not going well for them, we’re trying to get them going, be a boost, but it’s not easy. It’s a lot being thrown at to in the moment kind of figure out, but I have the most confidence in my guys. Time and time again this year, they figured it out. Jayson figures it out. Jaylen figures it out. Those guys are battle tested and I believe they’ll be fine.”