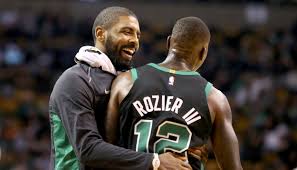 A couple days before his first ever playoff start Terry Rozier visited the home of his friend and Celtics teammate Kyrie Irving.  And he left with more than just advice.

“I went to his house two days ago, took all his shoes,” Rozier said.

Rozier might not have worn Irving’s shoes during Sunday’s Playoff game 1 against the Bucks, but he most certainly filled them.  Particularly in the clutch.  At the end of regulation, Rozier knocked down an ice in his veins would be game wining three with .5 seconds left on the clock.

Of course that shot proved not to be the game winner as the Bucks tied things up on a desperation heave from Khris Middleton at the buzzer.  But in overtime, Rozier took matters into his own hands.  He scored eight of the Celtics’ 14 points in the extra session, finishing the afternoon with 23 points, including four treys to go with his four rebounds in a 113-107 Celtics victory.

It’s gotta be the shoes, right?

Probably not, but whatever Irving said to him a couple days earlier definitely made an impression.

“His message was, ‘go out there and take what’s yours, go out there and dominate, go and don’t worry about what nobody is saying,'” Rozier told reporters after Sunday’s game.

Irving’s impact on Rozier’s game and his evolution as a player extends well beyond one house visit and one playoff game.  Kyrie has guided and mentored Rozier all season long.  On the court, the profound effect Irving has had on Rozier’s game is indisputable.  From improving the accuracy of his pull-up 3-pointers, lethal crossover fadeaways, to the way Rozier has sharpened his ability to slash through defenders and finish strong, Rozier’s offensive approach reeks of Irving’s guidance.

Since Irving’s season-ending injury, Rozier has been one of the most vocal players in the Celtics locker room who has embraced his newfound role as a focal point of Brad Stevens’ offense. Throughout Irving’s absence, Rozier averaged 18.2 points in March and as for the postseason, he’s already off to one heck of a start.

“It’s been amazing. This is my third time in the league, third time in the playoffs and it just keeps getting better,” Rozier said. “It’s unfortunate what happened to our teammates throughout the year, but we still got each other and we still got to fight, still got to win. I just love playing with these guys and they just give me all the confidence in the world, but this year is probably the best one. Plus, I’m starting — so it’s like a dream.”