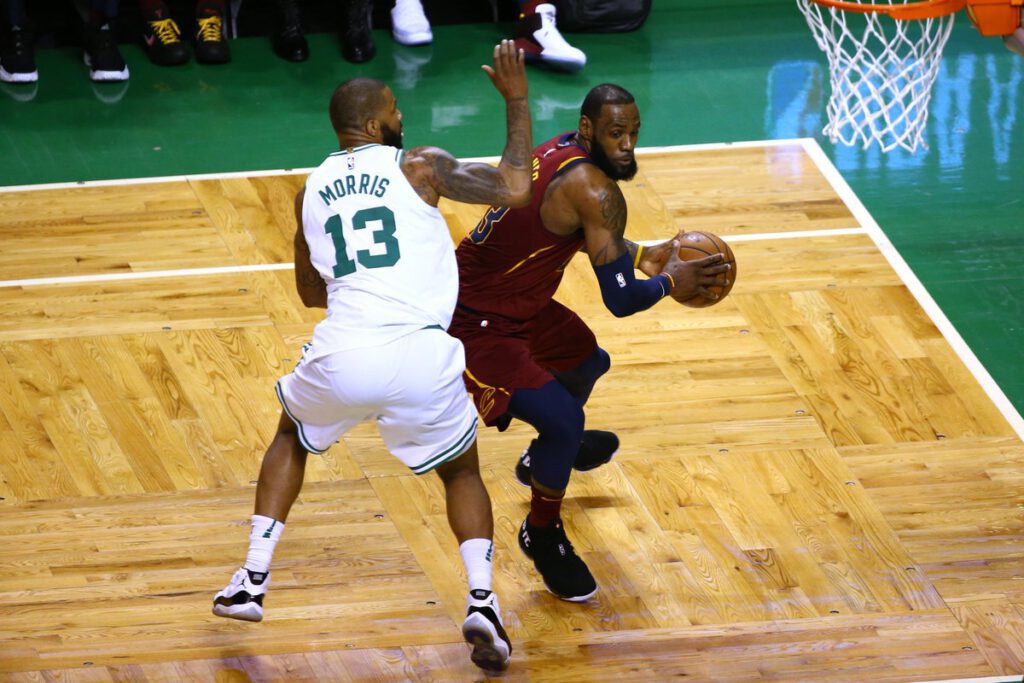 BOSTON — For one game, the Celtics certainly look like the better team than LeBron James and the three-time defending Eastern Conference champions.

Jaylen Brown (23 points) was on fire from beyond the arc and Al Horford dominated on both ends with 20 points, four rebounds and two blocks as the Celtics beat the Cavaliers, 108-83, Sunday in Game 1 of the Eastern Conference finals. In a likely precursor of things to come, the Celtics defensively mixed and match against James.

The Cavaliers looked like a vastly different team without Kyrie Irving. Instead of leading blowout wins in Games 2 and 5 of last year’s Eastern finals, Irving was on the other bench, cheering on the Celtics with Gordon Hayward and Daniel Theis. This time, it was the Celtics who were the team in charge, basically from start to finish.

Click here for a full box score of Game 1.

While much was made of Marcus Morris starting to get the first defensive assignment on LeBron James, it was actually a team defensive effort that spurred Boston’s massive first quarter run.

Morris started on James, but thanks to switches and different looks, Al Hoford, Terry Rozier, Jaylen Brown, Jayson Tatum and Semi Ojeleye all took turns flashing defensive pressure on James. This strategy seems to completely disrupt the Cavs, as they went ice cold from the field and did very little to create action toward the basket.

Trailing 7-4, the Celtics scored the next 17 points before a James basket. Boston would extend the run to 28-4, taking a 32-11 lead. Boston led, 34-13, before Cleveland scored five straight. Jayson Tatum drove baseline and hit a short fadeaway with 1.2 seconds left to give Boston a 36-18 lead after the first.

The Celtics manhandled the Cavaliers in the paint in the opening 12 minutes, outscoring Cleveland 22-10.

The Cavaliers put on a mini-spurt in the second quarter to cut the lead to 15, 42-27. But the Celtics answered with red-hot shooting from the perimeter, with Jaylen Brown connecting on a pair of threes and Al Horford adding another as the Celtics built their lead to 28 on a 19-6 run and taking a 61-36 lead to the break.

The Celtics continued their habit of mixing things up against LeBron defensively, with Marcus Smart picking James’ pocket 20 feet from the basket and driving the length of the court. He didn’t convert but that turnover eventually led to a Horford three as the crowd went into a frenzy.

The Celtics continued their defensive ways in the second half, though Cleveland did warm up a bit from beyond the arc. If there was one moment that summed up the struggles and frustrations of the visitors, it was a wide open 15-foot baseline shot from Kevin Love. He missed it and threw up his hands in disbelief as the Celtics took the rebound and headed up the court.

Another moment came minutes later when LeBron drove past Terry Rozier and missed a layup. He thought he was fouled, threw up his hands and the Celtics raced down the court for a Horford layup.

The Cavs began another run to end the third quarter. Trailing 65-37 on a Horford basket with 9:04 left, Cleveland outscored Boston 27-13 the rest of the quarter, capped by a Jeff Green jumper as time expired.

But in true Brad Stevens form, the Celtics did not panic. Instead, they responded with a 7-0 run in the opening 69 seconds, highlighted by a Marcus Smart three. The Celtics kept their foot on the gas. Jayson Tatum drained a three with 7:52 left to highlight Boston’s 11-0 run to put the game away and send LeBron, Love and the starters to the bench for the remainder of the game, as the lead grew back to 28 at 96-68.