The Celtics selected JD Davison in the NBA Draft, not utilizing future assets or the trade exception on Thursday night keeping a forward-facing focus. 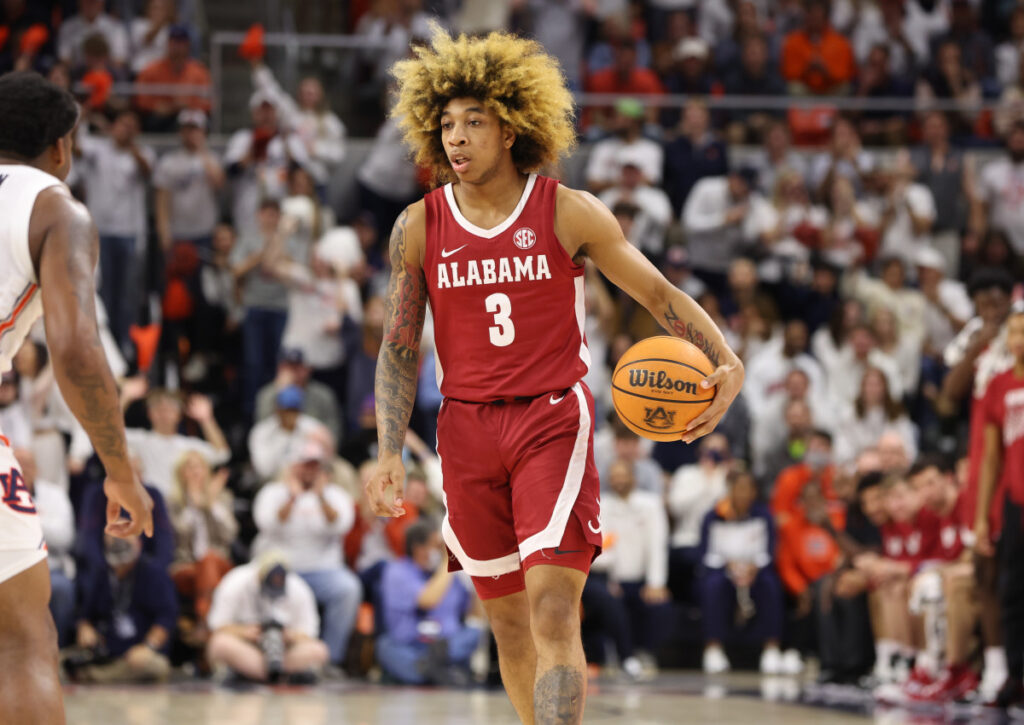 The Celtics explored opportunities to move up in the NBA Draft on Thursday, before deciding to maintain their future assets and select Alabama guard JD Davison with the No. 53 overall pick. The selection marked Brad Stevens’ first who projects to join the roster, after stashing 2021 second-rounder Juhann Begarin, though signaled a similar learning curve for the young guard who struggled in his lone season with the Crimson Tide.

“All you have to do is turn on a couple minutes of clips and you can see the upside,” Stevens said. “Now it’s about making it so that he gets accustomed to the NBA game, and he’s not going to have, barring anything crazy here, a ton of pressure to come in and impact us right away or move the needle for us right away. He’ll be able to come in and compete for minutes just like everybody else, but at the same time he can grow, develop and focus his attention on improving and that’s a really important place to be for a young player. We’ve got a really good team, but he’ll be able to put some heat on us with his speed on both ends of the floor that I’m really looking forward to.”

Davison, 19, will join the Celtics at next month’s Summer League, likely alongside Sam Hauser, Yam Madar, Brodric Thomas, Matt Ryan, Malik Fitts, Juwan Morgan and Begarin. Aaron Nesmith’s status remains uncertain, though unlikely entering his third NBA season and noting a need to take a break after his sophomore shooting struggles. Davison will have ample opportunity to run point for that team, a 6’3″ guard born in Alabama before developing enormous high school pedigree and turning down offers at giants like Kansas, Memphis, Michigan, Auburn and LSU to play close to home at Alabama. He averaged over 30 points per game through his junior and senior seasons, along with more than 10 rebounds and four assists.

ESPN ranked Davison second among point guards in his class, and 24/7Sports slated him No. 1, making him the highest-touted commit in Alabama basketball history. He dwarfed Herb Jones’  three-star ranking in 2017, an eventual All-Rookie First Team selection from the Tide one year ago. Nate Oats secured Davison’s commitment, and despite struggling to shoot and score in his freshman campaign he grew done with college, according to Jonathan Givony of ESPN, and decided to make the leap with uncertain prospects. Givony positioned him as an early second round pick before dropping him to No. 48 in his final mock. He fell to Boston at No. 53.

Stevens, given the Celtics’ returning rotation, opted for potential with the pick and knew Boston wouldn’t end the night with a player ready to bring transformative impact to the Celtics. Given the team possibly exploring free agency and utilizing their trade exceptions in next month’s free agency period, there’s a chance Davison could join the team on a two-way contract and spend ample time in Maine. He shot 46.3% from the field with a 30.1% mark from three, averaging 8.5 points, 4.8 rebounds, 4.3 assists, 1.0 steal and 2.9 turnovers per game at Alabama in 25.8 MPG through 33 games.

Even during an uneven campaign, Davison hit catch-and-shoot threes at a 37% rate, penetrated defenses at the rim around ball screens and distributed the ball at a high rate. At a point in the draft where most prospects feature one trick or athletic profiles that may not translate to the next level, the Celtics surpassed better players today to acquire someone they can mold into their desired skillset with the baseline attributes to build on. Davison’s leaping ability, first step, defensive tools and speed all check out at the NBA level.

Little more than that appears professional right now, Sam Vecenie considering the guard years away from impact, which is fine given Boston’s needs, roster and the outlook for a player who turned 19 in the fall. The Celtics enter the offseason with 13 players under contract, leaving two open spots vacated by Luke Kornet and Nik Stauskas. Hauser and Morgan have team options, while Fitts has a non-guaranteed contract.

That gives Stevens, as he noted after the draft, flexibility following Summer League, including the ability to evaluate the team’s two free agent two-way players in Thomas and Ryan, who Davison could potentially replace or bump up into a full NBA contract. Stevens cast some doubt on the team’s usage of the Evan Fournier $17-million trade exception before it expires on July 18, which went unused on draft night.

“We’ve been having these talks for a while now. We know who fits into our trade exception and who we may be able to target around the league,” Stevens said. “At least (we) have discussions about it, then it really comes down to cost. So if the costs are appropriate, then you continue discussions, and if they’re not then you table it for now and maybe you return to those later. At the end of the day, our trade exception is a tool, but it’s not our only avenue. We have the ability to do some small things in free agency with the taxpayer mid level and then obviously the ability to add some minimums. If that thing vanquishes because we don’t find the right deal, then we still have two other TPEs to use toward the trade deadline. That was the other thing about tonight, we wanted to make sure we were smart about all of our future assets, about not shifting our team without very, very obvious moves that would help us. Those things didn’t present themselves and so we’ll stay at it and find some things that help improve us.”