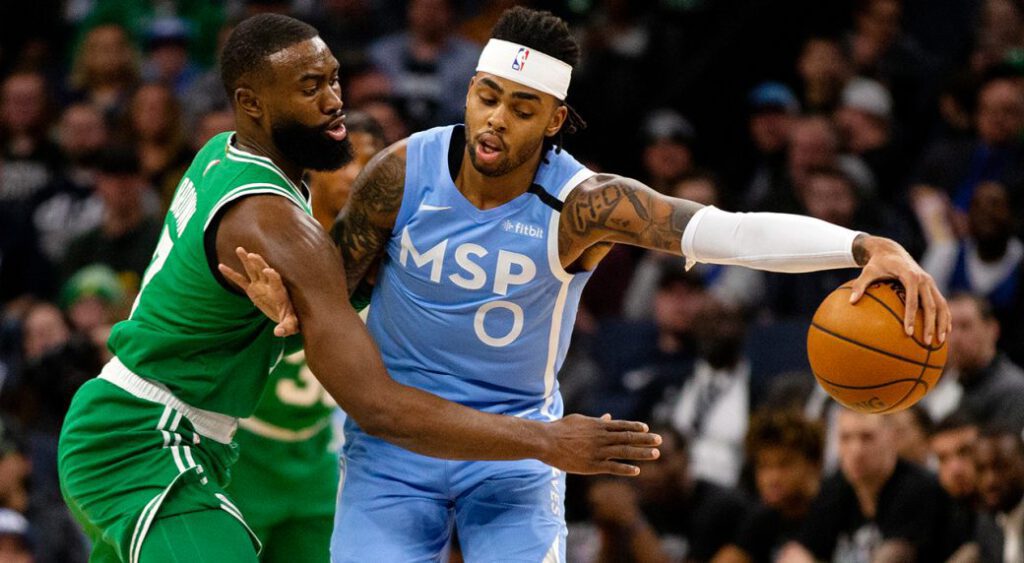 Kevin Garnett was likely booed by somebody in TD Garden the last time the Timberwolves entered Boston and won a game. The chances of that 15 years later are slim as No. 5 prepares to hit the rafters, as was a TWolves victory entering with 50 losses.

Minnesota, with the return of Karl-Anthony Towns, has what they hope is the core to return to their relevancy under KG. D’Angelo Russell arrived at the trade deadline, but it became apparent as early as his third game, against Boston, that won’t be this year. The Wolves looked their worst with him leading the offense, capsizing late in his 5-for-16 shooting night when Ryan Saunders turned away from the red-hot Malik Beasley.

One of the motivating factors in acquiring Russell was always Town’s relationship with him. If nothing else, they’d mesh in personality and one day decide to stay together. Towns missed that first meeting, before a string of injuries held Minnesota to just one win with Towns suiting up since Nov. 27. On Sunday in Boston — they got their second.

Russell and Towns combined for 57 of Minnesota’s 126 points in a rare Timberwolves win on Sunday. They received 13-of-25 shooting from their two stars. For Towns, his 35 points and 27 rebounds marked his largest triumph since Jan. 12, 2019 — when he posted 27-27 against New Orleans.

The Celtics led at halftime, but by that time had lost much of their eight-point lead from late in the second. Juancho Hernangomez and Towns formed an attack that Boston’s wing-heavy lineup couldn’t defend. Hernangomez pulled-up over Tatum for a two and Towns tore through Daniel Theis quickly into the third to reach within 69-68. Russell gave Minnesota a lead shortly after with a layup, high off glass, that the Wolves would extend.

Brad Stevens favored Brad Wanamaker who hasn’t leaped off the bench recently with Gordon Hayward out and the starters faltering. He fed Jayson Tatum for a cutting dunk to on the back line to tie the game at 77. The bucket got Tatum to 16 points, but Russell already sprinted far ahead of him with a jumper around a screen that earned him 30 and a two-possession lead after three quarters.

Tatum began the night stepping into a three against Josh Okogie that put Boston up 47-43 and marked his 200th this season — joining Isaiah Thomas, Ray Allen and Paul Pierce (who fell on the all-time points list on Friday) as the only Celtics to do so.

Tatum then saved an errant shot by Robert Williams inside on Towns to set up Smart for a successful three. Jaylen Brown slammed a transition dunk with his left hand that tilted Boston from down nine to up nine midway through the second. Kemba Walker then splashed a three to cap a 33-12 run off Smart’s steal.

Later in the quarter, the Celtics began settling against Minnesota’s bigger lineup, with misses from Brown and Walker outside allowing Russell and Towns to push a 5-0 swing. Walker danced around Theis’ screen and converted an and-one finish as the Wolves fought within three, only for Russell to skate into the paint again and hit Towns trailing for three.

Boston led by three at half and found themselves down by eight midway through the third after a pair of Russell pull-up jumpers. Walker and Beasley traded two more, then Hernangomez drilled a three to propel the Wolves up by double-digits into the fourth.

The Celtics got the Garden rocking on a 14-5 run to start the frame, funneling the starters in to jolt Smart to three triples in four minutes. Boston stood within 120-118 after Brown rushed to 27 points with a slam in transition. Theis kept the Celtics within that bucket, answering a make by Towns at the rim, only for Russell to tag him with a foul in the lane.

A pair of calls on Theis at the basket both botched Tatum’s two-for-one attempt to steal the game and displeased the crowd. Russell’s pick-and-roll dish to Towns inside sent Theis to the bench with six fouls and Boston had received all four of its free throw misses from Towns already. He iced a 126-122 win for the Timberwolves causing his teammates to rush the floor. The Celtics tripped with a golden opportunity to approach within 1.5 games of Toronto.

Boston’s simulated season continues on Wednesday with a meeting against the Heat on Wednesday. To subscribe and follow the rest of the season — visit CLNSMedia.com/StreamLive.