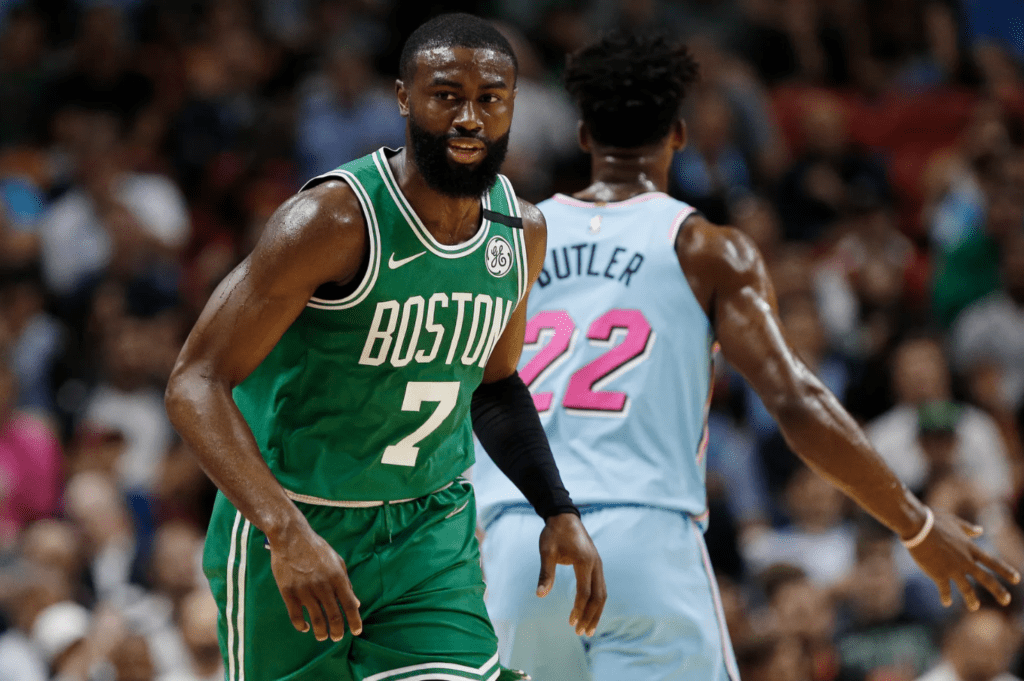 Jayson Tatum and Jimmy Butler jarred into the final three minutes. Tyler Herro shot free throws that both separated the fuming pair of players and handed the Heat a four-point lead with under three minutes remaining.

There was no division despite the referees’ best attempt when both teams clashed physically two separate times during a tense three quarters that barely resembled the Celtics’ first-quarter route.

Jaylen Brown hit five straight shots in the clutch to outshoot Butler in crunch time, edging out Butler’s string of assists that kept the Heat within a possession until the final buzzer. They may have survived in an Elam Ending world. With the clock still intact until some major event rules it obsolete, Boston killed the final two seconds to grab a 120-118 win. The in-bounding issue remained in March — yes it’s finally over.

The fights matched the game’s suspense during the closing sequence between two teams angling for home court in future series —the Heat in round one and Celtics in round two. Brown and Duncan Robinson traded threes in the fourth to take leads back and forth, then Brown drilled another the next possession. Marcus Smart secured two stops on Butler in the final three possessions, while Brown landed another pair of makes in the lane.

Boston led 14-7 early. Kemba Walker then slid around Daniel Theis’ seal to add another two points to the lead. Grant Williams took a charge sending Tatum to the rim for two more. Butler momentarily slashed the momentum with a pull-up swish, then Smart drilled a three and fed Tatum for three more off a steal. The Celtics ran away with a 24-9 opening run.

Miami pulled within seven into the second quarter as Boston’s bench rolled in, sending Enes Kanter to the post for right hook that Jae Crowder frowned at. Smart stole an inside feed from Bam Adebayo and sent Tatum racing to the opposite rim where Crowder clipped him out of midair. While Tatum laid grimacing, Smart and Kanter raced to Crowder and shoving and separation ensued — settling to a flagrant one on Crowder and technical on Kanter.

The galvanized Heat followed Tatum’s split free throws that put the Celtics up 10 with a Tyler Herro three and Butler pull-up two. Smart closed in tight on Butler’s follow-through and Butler let Smart know the shot went through before the groans made it clear. Tatum switched onto Butler and returned the favor, his shot for three, with words they’d re-up later.

Butler hopped back on the ball, storming into the paint and hitting Robinson on a dime for three, pulling Miami within 61-58 at halftime after trailing by 15. The teams stayed within one possession into the fourth quarter. The Celtics rode 12 threes mostly between Walker and Tatum to keep up with Miami’s transition attack.

Boston added two more to take two leads midway through the fourth, answered immediately by Butler and Andre Iguodala on hard drives to the rim. Kanter’s post-up on Crowder failed this time, his kick-out picked off by Derrick Jones Jr. allowing Crowder to break the other way to an open corner for three. He let Brown know the deed was done all the way down the floor, while Iguodala launched a three that landed in Kanter’s hands as he swung his elbow in defiance to Crowder’s pressure.

The referees sent both home early after another fight with the Heat ahead 102-100, a win for Boston given how the Heat tried to overload the Celtics missing Gordon Hayward with wings. The Celtics found Brown in transition for a spot-up three and led 109-107 shortly after.

Goran Dragic first angled the corner to hit Robinson for three following methodical passing. The Celtics twirled their own array to find Brown in the corner this time for a critical triple. Boston got within 114-113 and received the turnover needed to launch Walker into the paint and to the free throw line, but they weren’t as sharp there. His split handed the Celtics a tie.

Brown proved a steadier hand. After Smart stopped Butler’s lined up shot on the other end in isolation, Brown blew by Miami’s star on the other end for two and the lead. Butler would find Jones on a cut to tie the game one more time, but with no answer for Brown it held little staying power. Brown hit a pull-up two in the lane, mixing it up this time on Butler and Smart secured the final stop on him.

The sides nearly scrapped again, this time the stakes were too high so they made peace to allow Smart’s free throws to follow. He hit both. Kelly Olynyk followed with a turnaround though only two seconds remained.

Three weeks ago the final-second inbounds was Brad Stevens’ biggest nightmare. Two meltdowns to begin March engrained that situation into his head. April is here and Walker caught the pass and ran the two seconds off, finishing the season sweep.

Boston’s simulated season continues on Wednesday with a meeting against the Heat on Wednesday. To subscribe and follow the rest of the season — visit CLNSMedia.com/StreamLive.