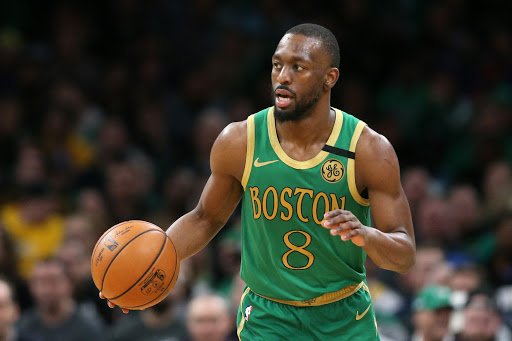 John Havlicek and Paul Pierce could not stand in Carmelo Anthony’s way. Their jerseys tucked away long ago and only their numbers floating overhead serve as a reminder.

Melo fought to return to the court for an 18th season in 2019-20. He earned a spot with the Trailblazers, a team poised to visit TD Garden when he arrived needing two buckets to pass two Celtics legends in all-time scoring.

Anthony still has that ability if nothing else. Averaging around 15 points per game at 35 years old, he splashed a base line jumper in the first quarter to reach 26,396 — stealing 16th from Havlicek. Pierce sat at home on his off night with ESPN, knowing his spot in history would fall one spot with even he unable to attend.

Playing Melo on a faltering Blazers team eyeing a milestone was an opportunity for Boston too.

Jayson Tatum blew by the most players to score 23 points on a night where Melo broke two records. Kemba Walker added 34 to avert a third-quarter rush led by Lillard while also helping Tatum switch onto and scorch Anthony. He led a 9-0 run to close the frame with a driving finish and three. The Celtics won 127-112 to break a recent string of losing to teams they beat out west (Thunder and Jazz) in Boston.

Walker continued to regain his earth-shattering form that had him ahead of Tatum in scoring through the new year. He shot 11-of-21 with six assists as Stevens begins to concentrate ball-handling duties to his starters with health intact and 10 games until the playoffs.

Boston has now won seven of its last nine games and pulled within 2.5 games of Toronto behind Walker and Tatum’s steady scoring — reminiscent of a cornrows-sporting Melo donning blue-and-gold in a different era.

Brad Stevens and Terry Stotts raced to their smallest lineups in the first quarter, leaving Melo and Grant Williams as the tallest on the floor. The Celtics escaped a one-possession game early through back-to-back threes from Jaylen Brown and Hayward against a Portland zone.

Boston, zone-busters all year, found Walker in transition to cap the run ahead 25-18 at the free throw line. Walker and Gordon Hayward closed the first with another pair of threes to go ahead nine.

Portland tried any defensive alignment available, but their disastrous season in their own end continued. Stevens rode a tighter rotation to a 47.8% shooting night, drilling three straight shots in-between midway through the second quarter to go ahead 50-32.

Walker had scored 16 points already, before Lillard scored 6 of Portland’s next 12 on a run to within seven points with one minute left in the half. Stevens called timeout, trying to assert control as the Celtics blew another massive lead. Tatum’s ATO leaner failed over Ariza, before Lillard hit a pull-up three just past half court. Hayward limited the damage with a two before half, but Lillard hit runner with five second to go to pull within four.

Like it was following a recent script — the Celtics’ experimental rotations that included a 100% small lineup reminiscent of the Rockets folded into halftime. Boston couldn’t extend any sizable lead through the middle of the third. Lillard drilled another three to give Portland a 79-78 lead, its first since early in the opening quarter.

With Daniel Theis back on the court and Portland relying on Hassan Whiteside against Boston’s spread-out offense, Tatum could go to work on Melo in isolation. The Celtics’ defense finally secured a stop when Lillard heat-checked, then Tatum drilled a transition three then swiped the ball back from Melo in the post at the other end.

Walker and Hayward converted consecutive shots on the run inside to shoot ahead by 10 into the fourth as if they saw the Raptors trailing to the Knicks at MSG. Portland pulled back within four, spurring Brown to lead a bench unit against wing-heavy Portland starters. He immediately disposed of Trevor Ariza on the baseline for a slam. Smart cut off an Ariza pass on the other end and Walker splashed a three at the other end to return to 10 in 10 seconds.

Stotts waved his arms, but didn’t call timeout even as CJ McCollum mismanaged two straight possessions around a Walker back door cut and score from Theis. Smart kept the ball out of Lillard’s hands during the run and capped a 14-0 run with a three that sparked the Tacko Fall chants at 115-96.

With Enes Kanter hurt and Maine’s season over early, Stevens complied again to light the cigar on the Celtics’ 50th win that turned the page on last year’s 49-win campaign for good.

Tacko hauled in an emphatic rebound and the crowd lost it louder than the boos that rained down during the blowout loss to the Spurs at home nearly one year ago.

Our Sim Celtics League is powered in part by: