Celtics Stun Thunder without the Three in Second Half Comeback

The Celtics scored their third win in four games where they shot below 33% from three this season. A sign of their flexibility as the win streak continues. 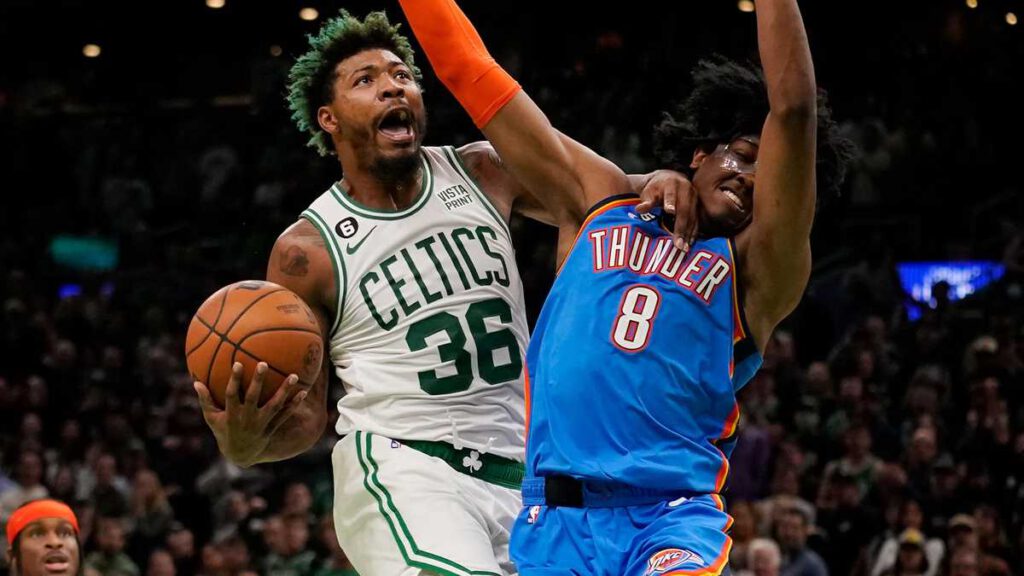 BOSTON — Marcus Smart searched for his budding left hand and found it spinning past Shai Gilgeous-Alexander, shocking the Thunder star and leaving him in the dust for a decisive layup.

Boston went ahead 123-118 in the closing seconds of a comeback win. Smart got support from a fake screen by none other than Jayson Tatum, who struggled to shoot, finishing 9-for-23.

The Celtics stunned Oklahoma City on Monday, 126-122, after trailing for almost the entire second half, coming back while shooting 10-for-37 from three (27%). They found other ways to extend their win streak to seven games, forcing turnovers, chasing offensive rebounds and diving deep for extra Payton Pritchard minutes. Free throws also keyed the victory, Boston drawing 29 and converting 24 at the line for their third win of the season in four games shooting below 33% from deep.

“It goes back to mindset and the stuff that we talk about, managing what’s going on in a game, you just have to ask yourself those questions to build an awareness to what’s going on in the game,” Joe Mazzulla said. “We were getting great shots on the offensive end, and especially in the second half, we didn’t allow our lack of shot-making to affect our defensive effort and execution. That, to me, is a sign of growth of a team.”

That poise didn’t appear early from a team that looked tired to Mazzulla. Gilgeous-Alexander easily collapsed the Celtics’ half court defense on his way to 37 points and hit Jalen Williams for jump shots. Both Tatum and Grant Williams watched their shots roll off the rim 0n the same possession, Williams standing in the back court after his and picking up a technical foul. Smart kept the Celtics within one possession by finding Al Horford on the back line and from three, finishing the night with eight assists.

Tatum, who shot 1-for-8 from three in the first half, focused on defense, recording three steals and three blocks, starting with a read on an errant Lu Dort pass that Tatum stole and turned into a pair of free throws.

His cut to begin the second quarter freed Sam Hauser for a three, but those weren’t widely available for Boston. The starters on the league’s best three-point shooting team only combined to make four in the win.

“Easy buckets,” Tatum said. “That’s part of the evolution of being a better scorer, getting to the free throw line, obviously being the focal point of the other team’s defense, drawing a lot of attention. Obviously, there’s going to be other times you have to take and make tough shots, but throughout the flow of the game, corner three-point shots, offensive rebounds, tip-ins, two fast break points, buckets. Those things add up and get you in a rhythm for later in the game.”

Officials hit Tatum with his fourth technical foul of the season early in the second after a touch foul call. Mazzulla grew frustrated plays later over a call against Luke Kornet. The Celtics didn’t get consumed from that point on, Tatum pummeled through Jaylin Williams for a pair of free throws, Smart navigated an early third foul call to stay in the game late.

Mazzulla and the coaching staff pumped up Tatum after he swore following another three-point miss into timeout. The Celtics faced their longest deficit of the season, trailing for over half of the game from the second quarter on, but they never faded.

Mazzulla inserted Pritchard less than three minutes into the second half searching for a lift. Smart and Horford finished their own misses early. Tatum ran out to block Josh Giddey at the end of the shot clock. Then, Pritchard grabbed the second of two missed three-pointers from Tatum and Smart to get Horford a third-chance try, which he missed. The Celtics turned up the heat defensively, and a flood of 15 steals followed. Tatum and Jaylen Brown connected on the break, and Smart finished through Giddey attacking him with his left hand.

“That was the guys, they came up with that,” Mazzulla said. “Having the pick-up points higher, the ball pressure being higher and then having the late help once they get below the free throw line. The guys came up with that and they executed it well.”

Tatum took a seat late in the third after falling to 5-for-18 from the fiedl and Pritchard pulled the Celtics from down 15 points to within seven behind his three and pair of steals leading to layups. Pritchard’s second try barely beat the buzzer as Smart, sitting with foul trouble, greeted Pritchard underneath the basket with a chest bump.

Pritchard hit a three to begin the fourth and grabbed another steal, but the Celtics botched three straight fast breaks to hand the Thunder brief breathing room. Pritchard got swallowed underneath and Derrick White crashed into Kenrich Williams to commit and offensive foul. A parade of turnovers progressed on the Thunder’s offensive end, Boston forcing seven turnovers in six minutes to begin the fourth.

After Isaiah Joe missed 2-of-3 at the line, Brown made a mid-ranger, then poked away a Giddey pass and threw to Tatum, who rose to the rim and drew a goaltending on Kenrich. Tatum dove downhill on the next possession to cut the Thunder lead to two, only attempting one three after halftime. He tied the game flushing a two-handed slam behind the defense, with Smart finding him with a tight entry pass.

Tatum returned the favor, finding Smart in a two-man game for a go-ahead free throw. Smart tied the game again with a post turnaround, hit a long two after Horford found him after forgoing a three-point try of his own.

Then, after Tatum tried attacking Jalen Williams in the post, the ball bounced out of his hands and into Smart’s. This time, a three fell. The Celtics led, 118-115, and never trailed again. Smart — not Tatum, Brown, or a three — buried Gilgeous-Alexander and the Thunder with the decisive basket plays later.

“I know teams, especially with Jaylen and Jayson on the court, a lot of times I get the team’s worst defender and that’s probably their best scorer on the other end,” Smart said. “For me, I have to use that. Me, getting in the paint, does a lot of great things not just for me, but for the team. I can get in the paint and if I’m starting to score the ball too much, you’ve got guys having to help off of Jaylen and Jayson to stop me, and now I’m kicking it to those guys for open and threes and if they get it going early, now it opens up for me to take off and drive.”