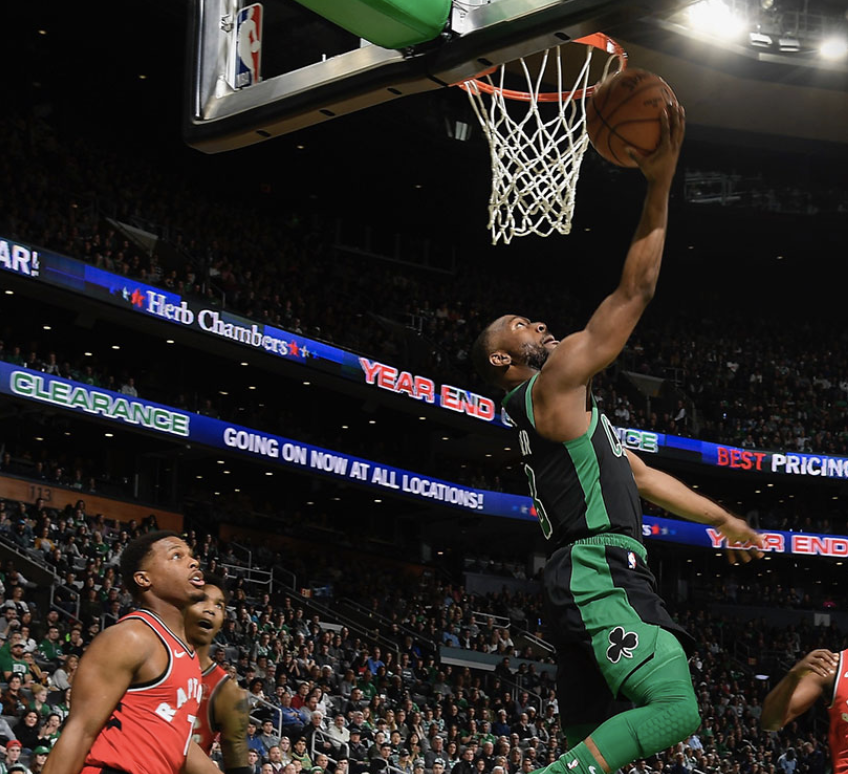 BOSTON – The Celtics and Raptors need to meet in the playoffs.

That’s the biggest takeaway from the two games over four days between two of the best teams in the Eastern Conference.

Saturday night, the Raptors went out to double-digit leads four times in the first three quarters. Each time the Raptors took Boston’s best punch and countered. The Raptors got 30 points from Kyle Lowry while the Celtics countered with 30 from Kemba Walker but Jaylen Brown and Jayson Tatum looked tired and off their game.

That was countered by the high energy and attitude the defending NBA champs brought to TD Garden. That was enough to pull off a 113-97 win over the Celtics at TD Garden.

It wasn’t what Celtics fans entering the building wanted to see Saturday but it sure was compelling basketball between a rejuvenated Celtics franchise playing with newfound energy this season and the defending NBA champions showing their mettle on the road against a team that just beat them by 16 on their home court on Christmas. It’s why these two would be phenomenal and compelling playoff basketball for seven games come May.

In a huge disclaimer, the Raptors played Saturday and their previous two games without Paschal Siakam, Marc Gasol and Norman Powell.

The Celtics can relate. Saturday night, with the return of Marcus Smart, marked just the sixth time in 30 games they have had their full complement of players. They can also relate with being tired like the Raptors were on Christmas at noon. The Celtics beat the Cavaliers on Friday afternoon for their fifth straight win. The Raptors were finally catching the Celtics on the back end of a back-to-back.

“You’re not going to win a game like tonight by outscoring these guys again, right? The other day was a little bit of an anomaly,” Stevens said of Boston’s 118-102 win on Wednesday. “That was a tired game for them. I mean, and they played the 22nd and 23rd and then a noon game on the 25th. That’s tough. To expect that we were going to see the same team tonight would’ve been silly.”

What was silly Saturday was Boston’s inability to execute offensively and rebound. They were a season-worst 21.9 percent from behind the arc and were murdered on the glass, 53-31 and outscored 23-5 in second-chance points. That’s why Boston lost for the first time in three tries against Toronto this season and for just the second time in 15 home games.

“They wanted it more man, you could tell,” Walker said. “They deserved that win, no question. We just have to look at this game and just get better; that’s really all we can do. I think we have to get back to the drawing board a little bit. We had a game (Friday) night, obviously, and we came out. They pounced on us from the very beginning of the game, and like I said, they deserved to win.”

These two Eastern powers meet once more this regular season on March 20, with playoff seeding and home court likely at stake.

The Celtics entered Saturday at 22-7, good for second in the East behind the red-hot Bucks and percentage points ahead of the Heat. The Raptors were 21-10 and just percentage points behind. The Sixers, who’ve already beaten Boston twice this season, are lurking in fifth.

The Celtics are now 22-8, percentage points ahead of Miami for second place in the East. The Raptors are 22-10 and half-game behind Philly but the Raptors have the fourth-best percentage. Point is, there’s very little separating the four teams behind the Bucks.

“We beat those guys (Toronto) two times already,” Walker added. “Obviously, a few days ago on Christmas – they definitely remembered that of course. Those are defending champs; they’ve got a target on they’re back. They’re the team to beat, and they came in like they were the defending champs tonight. Like I said, just so much credit to those guys and the way they played, man, they were great.”

The Celtics had a pair of buzzer-beating threes from Smart and Kemba Walker to end the first and second quarters, respectively.

But the Celtics couldn’t maintain the boost they received on both occasions. That, after all, is the true sign of a champion: take the best punch your opponent has to offer and then steady the ship. That’s what the Raptors did all night.

“They absolutely destroyed us in transition, which was bad,” Stevens conceded after. “You know, those transition layups in the first half – they were up five, but they’ve got eight points that are uncontested on run-outs. You can’t allow that. It’s not – it’s not good. And then they were great in the pick-and-roll all night. They destroyed us. And so, we have to be much better defending that. And, but that’s, you know, I don’t think we’re very good at it yesterday either.

“So, we’ve got a lot of work to do to be the best version of ourselves. I don’t think tonight is as much about us. I think that they – I think that our – that our guys did some good things and had some moments, but that – they deserve a lot of praise. They came in here and set the tone for how the game was going to be played; played with great energy. They looked like people that were the last team standing last year, just from the standpoint of even though it’s a lot of different guys, just, they played with great make-up today.”

That’s the best lesson for the Celtics to take from Saturday. Boston is one of five legit contenders for the Eastern title. The way they’ve played so far this season, they’ve earned that. But the point for the remaining 52 games is to determine what kind of team can they be come the playoffs in April.