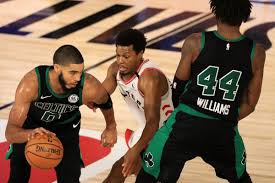 The Toronto Raptors have been favored in both games 1 & 2 of the Eastern Conference semifinals against the Boston Celtics. Despite Toronto losing both games to what appears to be a superior Celtics squad, sportsbooks refuse to back down.

In fact, they’re doubling down.

According to the online sportsbook Betonline.ag the Raptors are once again favored (-2) over the Celtics heading into Game 3 on Wednesday night. Tip is set for 6:30 p.m.

The Toronto Raptors must be tired, because coffee is for closers. And following game 2’s performance against the Celtics, they don’t get to have any. The Celtics did everything in their power to give game 2 away but the Raptors squandered a chance to even the series, allowing the Celtics to escape with a 102-99 win and a 2-0 series lead.

Kemba Walker had a rough start on Tuesday night. The four-time All-Star had six points on 2-of-14 shooting through 3 quarters before turning on the jets in the final frame. He scored 11 of his 17 points in the 4th quarter including a dagger step-back jumper with 41.6 seconds on the clock.

Toronto’s stars all shot poorly in game 2 with Pascal Siakam, Kyle Lowry and Fred VanVleet going a combined 19-for-54 from the floor (35%)

The Raptors have to feel deflated after letting a very winnable game slip away. They obviously have to find a way to win game 3 but don’t have answers for either of Boston’s wings (Tatum and Jaylen Brown) and probably won’t see Kemba Walker shoot as poorly as he did again in Game 2.  Even without Gordon Hayward the Celtics have 3 of the best 4 players in the series on their team and the Raptors can’t seem to make up for the talent deficit. Expect the Raptors to come out firing but if Boston puts its best foot forward this game, and series is OVA.

CLNS Media’s betting content is powered by BetOnline.ag. Support CLNS Media by checking out BetOnine and take advantage of all the great sign up bonuses.