Charlie McAvoy Finally Playing Like No. 1 Defenseman For Bruins 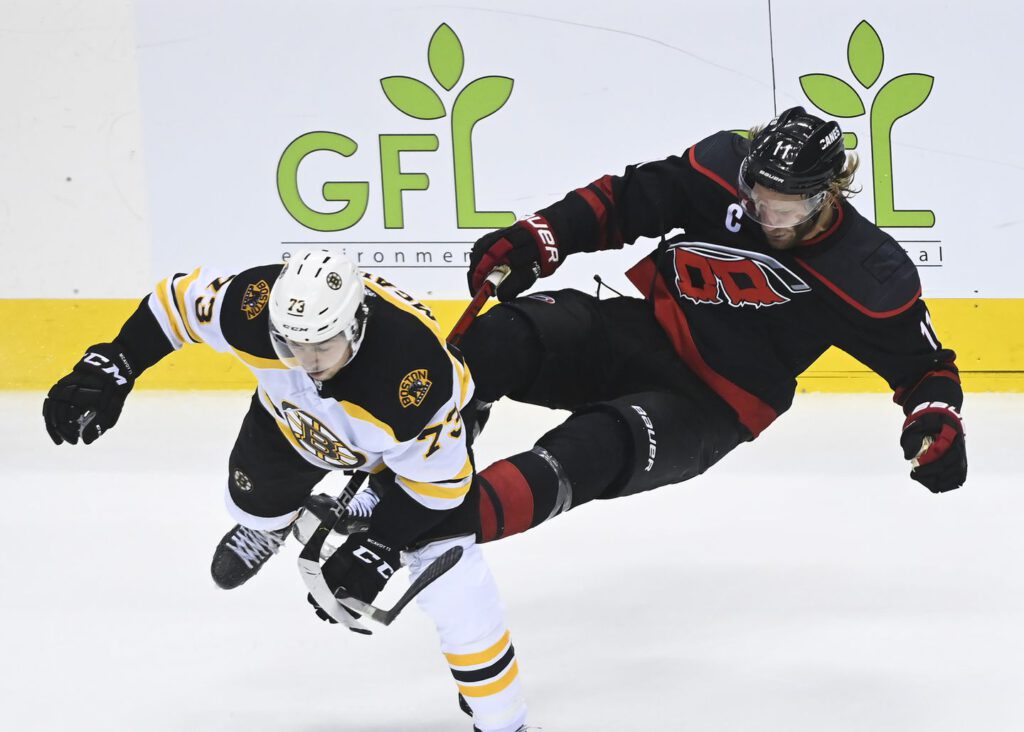 When the Bruins re-signed Charlie McAvoy to a three-year, $14.7 million deal in September of 2019, it was viewed as a palatable deal for Boston in the short-term and one McAvoy could use to prove himself for his next, much bigger contract. McAvoy had the potential to warrant a longer, more expensive deal at the time, but not enough actual results, leading the two sides to agree on the three-year deal.

Through the 2019-20 regular season, McAvoy’s play left a mixed bag of reaction. While the 23-year-old held his own in the defensive zone and led solid transitions through the neutral zone, the offensive results weren’t there for a d-man with his potential. Until he scored his first goal in Febraury, McAvoy only had 17 assists.

But then the Bruins first-round series against the Hurricanes happened and in a stretch full of adversity (see: Tuukka Rask) and uncertainty (see: Jaroslav Halak playing well enough to win), McAvoy wasn’t just consistent — he stepped up and played like an actual No. 1 defenseman.

“Charlie’s obviously a very talented player, I’ve said it many times,” Zdeno Chara said of his partner after Game 4. “He’s obviously a very strong skater, he’s got really great abilities to make big plays at crucial times of the game and obviously he can be very physical as well. I see him as someone who can make a big difference in a game.”

McAvoy made many big differences in many games during the Bruins series win over the Hurricanes. The constant: he embraced the role of a No. 1 defenseman.

Winning his matchup with Carolina’s best

The task of shutting down the opposition’s best is something McAvoy has become accustomed to in recent years. That’s life when your partner is Zdeno Chara.

But against the Hurricanes, Bruce Cassidy elected to give Brandon Carlo and Torey Krug the majority of the minutes against Sebastian Aho’s line. McAvoy and Chara instead got their time against the trios centered by Vincent Trocheck and Jordan Staal.

While Chara looked his age throughout the series, McAvoy dominated those matchups.

“Real solid,” Cassidy said of McAvoy’s performances. “Obviously, Charlie is tasked with always playing against good offensive players. He’s never going to have a night where he’s going to see not one of the top two lines. It’s just the way it is for Charlie. At a young age, that’s a difficult task.”

The line McAvoy faced the most was the one centered by Trocheck — Rod Brind’Amour jumbled up the lines so much that his wingers changed quite a bit through the five games.

Here’s the Trocheck line’s Corsi For percentage in each game.

In other words, McAvoy shut Trocheck’s line down.

When a player of McAvoy’s caliber and potential rises through the ranks and arrives in the NHL, they’re usually not getting these kinds of top assignments.

That’s never been the case for McAvoy and it’s why his offensive numbers haven’t always been eye-popping.

“Typically, the guys come in, they’re puck movers or they get to play power play, get a few of the lesser challenging assignments,” Cassidy said. “Charlie has never had that and certainly he’s getting tough assignments in this series and will moving forward if we’re able to move forward. That’s what I love about his game.”

Another aspect of the shutdown game is playing an absurd amount of minutes. For so many years, Chara was that guy for the Bruins. Now at 43 years old, Chara can no longer play those minutes and is relegated to penalty kills and defensive zone draws.

McAvoy has since emerged as the man with all the minutes. His total time on ice of 158:25 ranks among the top-20 in the postseason. The main reason why that doesn’t rank higher is because 13 of the 18 players above him played in the Columbus-Tampa Bay series that saw Game 1 go to five (5!) overtimes. His average ice time per game of 24:43 ranks among the top-25 in the NHL. Both numbers place first on the Bruins in their respective categories.

“You see his numbers going up,” Cassidy said. “We talked to him about this at the start of the playoffs. We need his legs, we need his physicality every night. He probably will be tipping up against 25, 26 minutes whereas in the year, we try to balance him a little better. But this time of the year, some guys are going to see a little more and he’s that guy that has definitely seen it. Kudos to him for handling it.”

McAvoy hasn’t just handled his assignments — he’s excelled in them.

“Now all of a sudden,” Cassidy began. “He’s that all-situation guy.”

And in this series against the Hurricanes, he also became that game-changing guy.

But for real, that hit McAvoy put on Staal in Game 4 wasn’t all hype — it actually did change the course of that game. It’s no surprise the Bruins scored three goals after it, held on to win 4-3, and eventually took the series in five games.

“He’s got a lot of meat over there,” DeBrusk said of McAvoy right after the hit happened.

The hit on Staal obviously energized the Bruins immensely. But it also knocked Staal — Carolina’s best shutdown center — out of the game.

It was the most game-changing play McAvoy’s made in his young NHL career and it came when the Bruins needed it most.

“You have to be able to create your own energy on the bench and going into that third period and obviously you’re down two and the game hadn’t really been in our favor,” McAvoy said after Game 4. “We had some chances and stuff but we were looking to create some energy and that was kind of the message – that we weren’t out of it. It was an opportunity to step up and make a hit, try and separate a man from the puck.”

The most important of McAvoy’s other great plays throughout the series came in overtime of Game 1.

Brock McGinn had the puck to the left of Tuukka Rask. With Matt Grzelcyk on his back, he spun around and delivered a pass to Warren Foegele who was looking to tap it in the empty net next to Rask. There was just one problem: McAvoy was on Foegele and got his stick on the puck, preventing him from scoring the goal, winning the game and the Hurricanes taking a 1-0 series lead.

The Bruins went on to win Game 1 when Patrice Bergeron scored the game-winner in the second overtime.

Had McAvoy not made that play, the series would’ve been entirely different for the Bruins. Rather than starting up 1-0, they would’ve been down a game and losers of four straight dating back to the start of the round robin. They lost Game 2 anyways, so add that on plus Rask opting out and it’s hard to imagine Boston comes back from that.

But none of that happened in large part due to McAvoy’s game-changing plays and his ability to shine as a No. 1 defenseman.